Officials said the bus – which was operated by a private transport company – crashed into a mountainside on Shahrah-e-Kaghan at a location between Geeti-Das and Babusar Top.

Rasheed Arshad, a spokesman for the Gilgit-Baltistan chief minister, confirmed that 26 bodies, among them women and children, have been retrieved from the wreckage. He said 13 passengers were admitted to the DHQ Hospital, Chilas, and some of them were in critical condition.

Islamabad confirmed there were 16 Pakistan Army personnel on the bus and said most of the passengers were from Skardu or other parts of Gilgit-Baltistan. Later in the day, the Inter-Services Public Relations also confirmed the death of 10 army soldiers in the accident.

The military’s media wing said army aviation helicopters took part in the rescue efforts and helped shift the injured and the dead to CMH Gilgit. 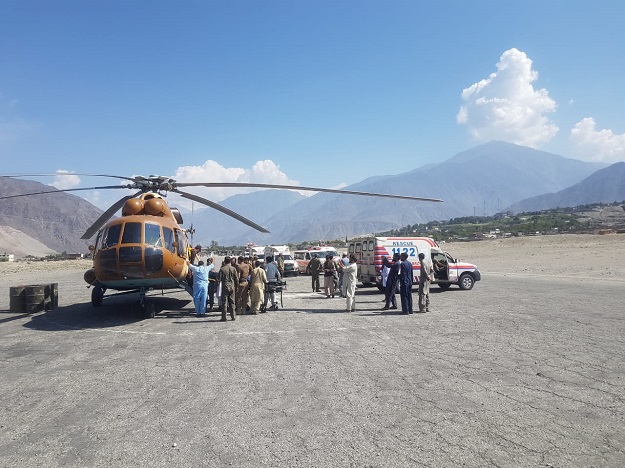 Army helicopters were used to transport the dead and injured to CMH Gilgit. PHOTO: ISPR

Prime Minister Imran Khan, who reached the United States on Saturday for next week’s United Nations General Assembly session, also expressed his grief over the tragedy. In a statement, the premier offered condolences to all affected families and ordered officials to ensure the best quality medical treatment for the injured.