Sri Lankan capital – Colombo has been hit by a wave of blasts killing more than 200 people. Police said the blast hit the suburb of Orugodawatta in the north of the capital, but there were no further details on what was targeted. Nearly 160 people have been confirmed dead so far in the string of attacks targeting hotels and churches.

In just one church, St. Sebastian’s in Katuwapitiya, north of Colombo, more than 50 people had been killed, a police official told Reuters, with pictures showing bodies on the ground, blood on the pews and a destroyed roof.

Media reported 25 people were also killed in an attack on a church in Batticaloa in Eastern Province. The three hotels hit were the Shangri-La Colombo, Kingsbury Hotel and Cinnamon Grand Colombo. It was unclear whether there were any casualties in the hotels.

Nine foreigners were among the dead, the officials said. There were no immediate claims of responsibility for the attacks in a country which was at war for decades with Tamil separatists until 2009 during which bomb blasts in the capital were common.

Prime Minister Ranil Wickremesinghe called a national security council meeting at his home for later in the day.

“I strongly condemn the cowardly attacks on our people today. I call upon all Sri Lankans during this tragic time to remain united and strong,” he said in a Tweet. “Please avoid propagating unverified reports and speculation. The government is taking immediate steps to contain this situation.”

One of the explosions was at St Anthony’s Church in Kochcikade, Colombo. St. Sebastian’s church posted pictures of destruction inside the church on its Facebook page, showing blood on pews and the floor, and requested help from the public.

President Maithripala Sirisena said he had ordered the police special task force and military to investigate who was behind the attacks and their agenda. The military had been deployed, according to a military spokesman, and security stepped up at Colombo’s international airport.

“The government has decided to block all social media platforms in order to prevent incorrect and wrong information being spread. This is only a temporary measure” Udaya R Seneviratne, secretary to the president said in a statement.

Sri Lanka’s defence ministry has also ordered a night-time curfew. The curfew will begin on Sunday night at 6:00pm local time and run until 6:00 am local time, the ministry said.

Sri Lanka’s police chief made a nationwide alert 10 days before Sunday’s bomb attacks in the country that suicide bombers planned to hit ‘prominent churches’, according to the warning seen by AFP. 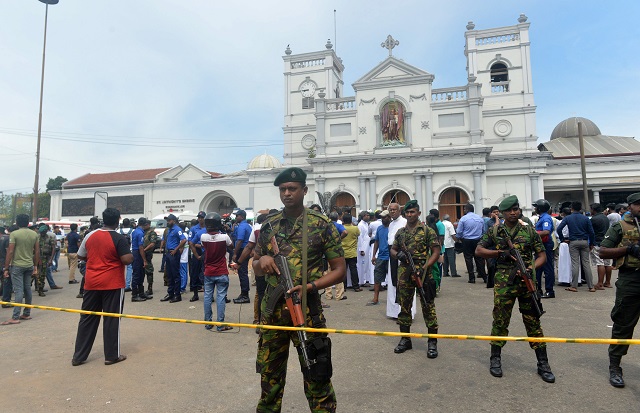 “A foreign intelligence agency has reported that the NTJ (National Thowheeth Jama’ath) is planning to carry out suicide attacks targeting prominent churches as well as the Indian high commission in Colombo,” said the alert.

The NTJ is a radical group in Sri Lanka that came to notice last year when it was linked to the vandalization of Buddhist statues.

Last year, there were 86 verified incidents of discrimination, threats and violence against Christians, according to the National Christian Evangelical Alliance of Sri Lanka (NCEASL), which represents more than 200 churches and other Christian organisations.

This year, the NCEASL recorded 26 such incidents, including one in which Buddhist monks allegedly attempted to disrupt a Sunday worship service, with the last one reported on March 25.

In its 2018 report on Sri Lanka’s human rights, the US State Department noted that some Christian groups and churches reported they had been pressured to end worship activities after authorities classified them as “unauthorized gatherings.”

“The acts of violence against churches and hotels in Sri Lanka are truly appalling, and my deepest sympathies go out to all of those affected at this tragic time. We must stand together to make sure that no one should ever have to practise their faith in fear,” she said on Twitter.