Macron made the announcement during a visit to French nuclear power company Framatome that develops nuclear reactors and related services and will provide the new powerplants for PANG. The new carrier will replace the French navy’s current flagship carrier, FS Charles de Gaulle which will be decommissioned in 2038.

“Charles de Gaulle, as you know, will come to the end of its life in 2038. This is why I have decided that the future aircraft carrier that will equip our country and our navy will be nuclear-powered like the Charles de Gaulle,” Macron said.

“Your plant in Le Creusot, which has been producing parts essential to our navy for a long time, will produce, among others, several major parts of the nuclear boiler of the future aircraft carrier by forging and machining them right here. By these choices, we confirm France’s desire to preserve its strategic autonomy.” 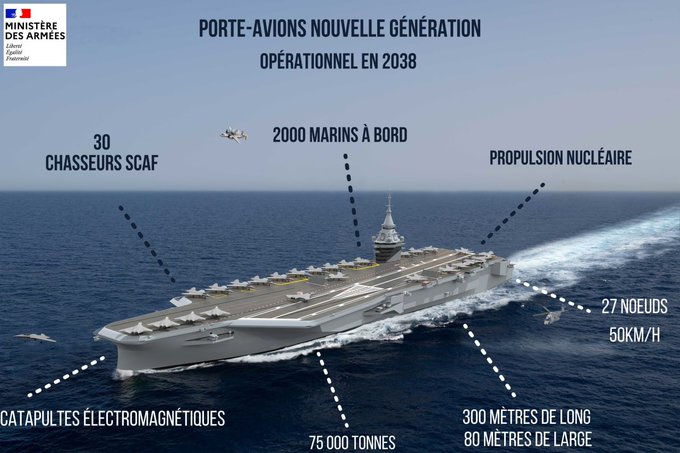 The French Ministry of Armed Forces released the concept art images of the planned carrier. The carrier will be the 11th warship in French history and the biggest warship France has ever built. It will be in the 75000-tonne class and around 300 meters long. It will be capable of sailing at 27 knots (around 50 km / h) and will feature two K22 boiler rooms (generating 220 megawatts) and electromagnetic catapults.

In comparison, the current carrier Charles de Gaulle is in a 42,000 tonnes class and is 261m long featuring K15 power generators (generating 150 megawatts). 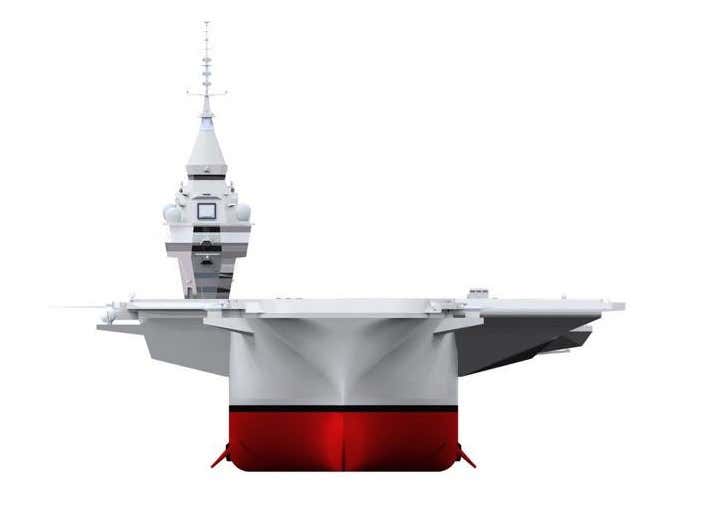 The images show a Catapult Assisted Take-Off Barrier Arrested Recovery (CATOBAR) design, which is currently used only by a handful of countries in their carriers.

The catapult system aids the onboard fighter aircraft to be launched from the deck of an aircraft carrier, helping it to reach speeds to allow for better payload capacities. The present systems only rely on the aircraft’s own propulsion and have ramps on the bow to assist take-off/launch.

The United States’ Nimitz class and Gerald R. Ford-class of warships feature the CATOBAR, other than France’s Charles de Gaulle. China is working on its new carrier that will feature CATOBAR and India’s INS Vishal, the Indian Navy’s second indigenous aircraft carrier, is also expected to feature the system.

The prime contractor, Naval Group, hailed the decision and added that the company’s know-how and skills will be fully mobilized to meet the French armed forces’ expectations.

“We are committed, as an overall architect, to respond, together with our partners Chantiers de l’Atlantique and TechnicAtome, as well as Dassault Aviation, to the expression of needs of the French general armament directorate (DGA) and the French Alternative Energies and Atomic Energy Commission (CEA),” Pierre Eric Pommellet, Chairman and CEO of Naval Group said in a statement.