Creating History! 4 Supersonic Jets Zoom Together In Diamond Formation In A Mesmerizing Event From The Past

On the eve of Christmas in 1985, a remarkable formation of four Concordes appeared in the sky as part of an unprecedented attempt by British Airways (BA) to commemorate the 10 years of service of the world’s first supersonic passenger-carrying commercial airplane.

In a decade since the first supersonic route from London to Washington was launched, the Concorde fleet had gathered 71,000 flying hours.

These planes had never been flown in formation before, and therefore BA decided to celebrate the tenth anniversary of Concorde flying four aircraft in formation for a very special birthday photo.

Before such an event was possible, days of planning went into the project. One of the main difficulties was finding the time when four Concordes would be available to fly together across the southern coast of Britain.

Once the planners found a date where three of the aircraft were available, they could find a fourth one, and the engineers began working to ensure that the four chosen aircraft would not have to be withdrawn for servicing at the last moment.

BA’s Senior Concorde crews were chosen to fly the aircraft for the event and each crew was allotted a special task to take care of.

Captain Brian Walpole, general manager of the Concorde Division, flew as the leader and decided exactly what formations would be flown. He also oversaw the planning for the event.

‘Made In Russia, Recycled In Ukraine’ — Putin’s Best Fighter Bombers Are Being Sold As Souvenirs In Ukraine

This event was a celebration and BA wanted to include as many of its employees as possible, therefore, the airline decided that in each aircraft, 65 of their flight deck crews would fly as passengers during the one-hour subsonic formation flight. The tickets were distributed to the staff by their heads of department, who each had an allocation.

The formation flight was planned to take place in November 1985, but due to technical limitations and poor weather conditions, the event had to be pushed forward until Christmas Eve, when there would be better aircraft availability due to fewer services.

The Day Of The Formation Flight

Finally, the wait was over, as the morning of the formation flight arrived and the crew, together with the excited passengers in tow, had a chance to set eyes upon a magnificent sight of all four Concordes, G-BOAA, G-BOAB, G-BOAF, and G-BOAG, lined up and waiting to create history.

The Concordes were pushed back off their stand, their engines started, and the police closed off the road crossing so all four could taxi across to the main airport apron. The formation was to be led by a Learjet that would capture the event on film and video.

The airliners departed from the ramp outside Tech Block K, lined up on Heathrow’s runway 28R (now 27R), and within a few minutes, all touched the skies, heading for the rendezvous point 15,000 feet above Lyneham in Wiltshire.

The four aircraft arrived at their first formation, the Diamond, with G-BOAA leading and G-BOAG bringing up the rear, after which, while heading towards Land’s End, they formed into their second formation, which was a Concorde “swan-like” outline created with 4 Concordes.

The final formation called for all four aircraft to fall in line for the set of famous pictures that we see today; however, the aircraft was not perfectly lined up for the pictures. According to concordesst.com, to this day, the captains still argue who was at fault for the imperfect line-up, although the imperfection helped prove that the picture was genuine and not a mock-up.

Nevertheless, this was certainly an epic moment in the career of Concorde, spanning more than two decades, after which it had to be retired in 2003 due to several factors. The supersonic aircraft was extremely expensive to operate, requiring fair pricing that was prohibitively high for many consumers.

In this short clip, you will see and hear Captain John Hutchinson who was on one of the planes that took part in the formation flight. He is explaining the formation before having a go at the controls himself.

Unique Photograph Of Six Concordes Together

Two days after the historic formation flight, six Concordes were lined up on the ramp of the engineering base for a unique photo of six aircraft together, while there was another one in the paint shop being put into the new livery. 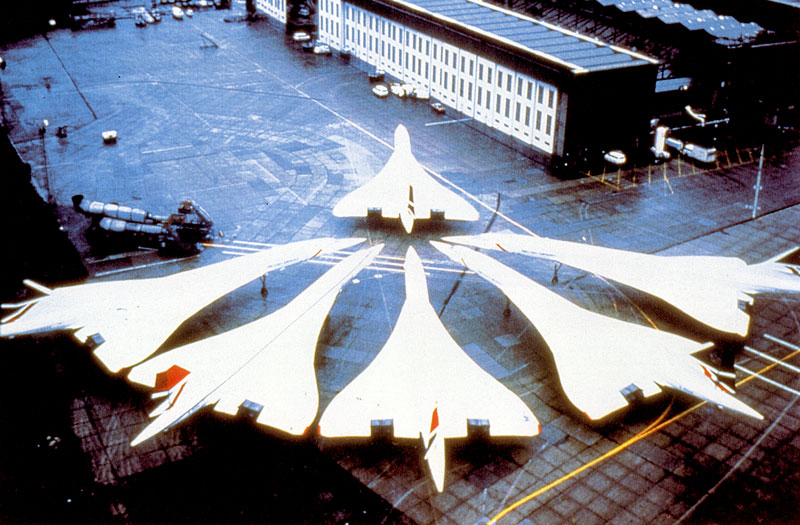 Brian Walpole, the General Manager of the British Airways Concorde Division at the time, famously told the photographer that as the weather was bad, “if he had to crash, please don’t crash on the Concordes as you will wipe out nearly my entire fleet!”

This was the largest number of Concordes ever photographed together until late 2000, when all seven were brought together for the first and only time before work got underway on the return-to-flight modifications.