Seven Frontier Corps (FC) soldiers of the Pakistan Army have been killed in two separate incidents in Balochistan, the Inter-Services Public Relations (ISPR) stated on Tuesday.

According to the ISPR, six Pakistan Army soldiers, including a junior commissioned officer (JCO), were killed when the patrolling team’s vehicle was hit by an IED when it was returning to a base camp in Pir Ghaib, Mach in Balochistan. A civilian driver was also killed in the IED attacks.

In another incident, Sepoy Imdad Ali was killed during a gunfight with rebels near Mand, in Balochistan’s Kech district, the ISPR stated.

This is one of the biggest terror attacks in Balochistan in this month. Earlier, on May 8, Pakistan Army soldiers were killed when an IED hit their reconnaissance vehicle near the Pakistan-Iran border. This incident transpired only 14 kilometres away from the Iran border.

As EurAsian Times reported earlier, the Baloch Liberation Army (BLA) claimed the attack of Pakistan Army convoy while returning from Pakistan-Iran border. A statement by the Baloch Liberation Army read – The vehicle in the convoy was completely destroyed when it was hit by an IED installed by the BLA, resulting in eliminating six Pakistani Army personnel including an army major and injuring several others. 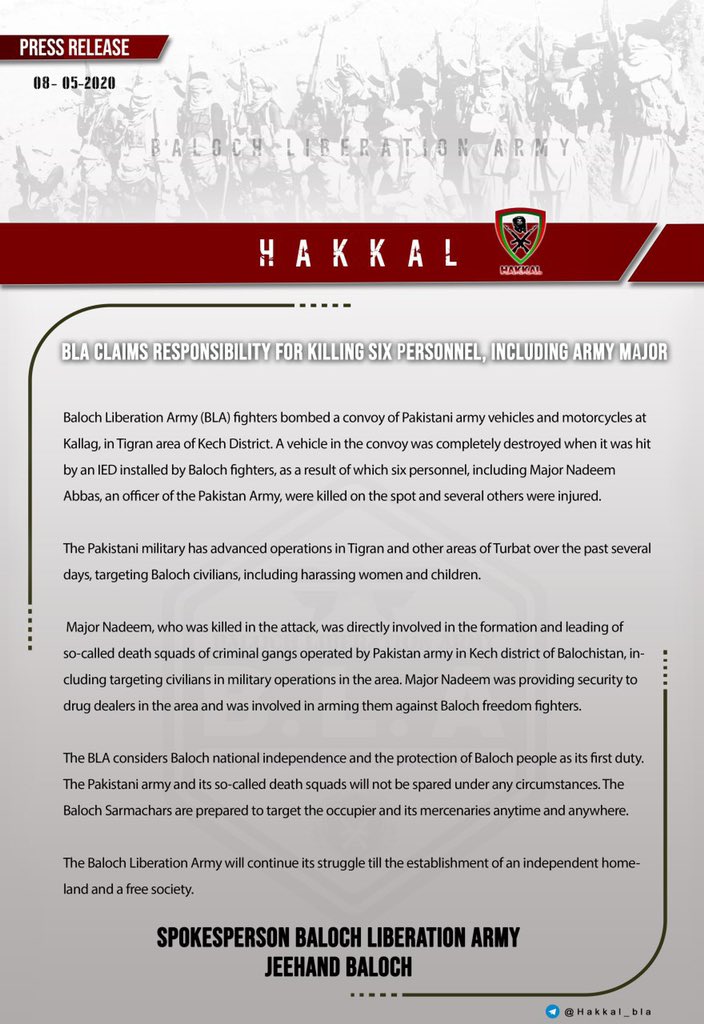 Balochistan has become a large source of terrorism in Pakistan. Over the past few years, infinite people including Pakistan army soldiers have lost their lives to terror attacks in the restive province and the Baloch Liberation Army (BPA) has emerged as a dangerous player demanding freedom from Pakistan.

Previous articleHow Bhutan Remained Unscathed From COVID-19 Despite Being Surrounded By India & China?
Next articleNegotiating With China Can Instantly Resolve India-Nepal Border Dispute?

In an interesting twist to the Malaysian Air Force’s hunt for a Light Combat Aircraft (LCA), the China-Pakistani JF-17 fighter ‘Thunder’ appears to be...
Read more

As India ‘Rethinks’ S-400 Acquisition, Russia Puts ‘Everything On Table’ For Pakistan

As India could be re-evaluating its stand on acquiring the Russian S-400 air defense system fearing US sanctions, its rival Pakistan may have quietly...
Read more
Load more