The world seems to be heading towards traditional Indian greetings – Namaste! After Israeli PM Benjamin Netanyahu promoting Namaste, US President Donald Trump and Irish Prime Minister Leo Varadkar exchanged a Namaste instead of a handshake in the Oval Office on Thursday. 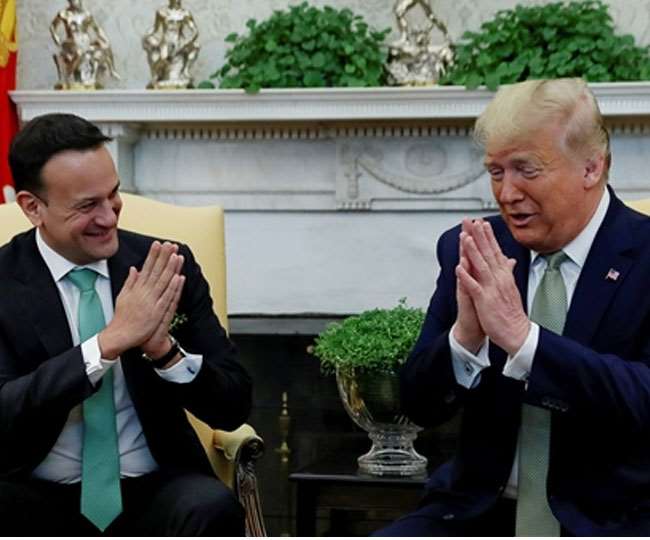 The two leaders followed that advice during their meeting at the White House. The Irish leader traditionally visits the US president ahead of St. Patrick’s Day.  ‘We didn’t shake hands today,’ Trump said. ‘We kind of looked at each other and we said what are we going to do. It’s sort of a weird feeling.’

The two instead folded their hands in prayer position and bowed to each other – the traditional namaste greeting used in India and other parts of Southeast Asia.  ‘I just got back from India,’ the president said, referring to his state visit there. ‘And I didn’t shake any hands there and it was easy because they go like this [he made namaste bow] and Japan goes like this [he bowed from waist].’ Earlier, Israel Prime Minister Benjamin Netanyahu has advocated the traditional Hindu solution to check the spread of deadly coronavirus i.e. to shun the traditional handshake with  “Namaste.” “Namaste” is the customary way to greet each other in India with folded hands.

Prime Minister of Israel Benjamin Netanyahu @netanyahu encourages Israelis to adopt the Indian way of greeting #Namaste at a press conference to mitigate the spread of #coronavirus pic.twitter.com/gtSKzBDjl4

Netanyahu had asked Israelis to adopt a new greeting instead of the handshake. “You can adopt the Indian practice – you can say ‘Namaste’ – or you can say ‘Shalom.’ But find the way, any way, to avoid shaking hands,” he cautioned.

As India and China are engaged in prolonged border tensions, India is boosting its capability to deal with cyber-attacks given...

Many Uighurs – around 1 million to 1.6 million, according to the World Uyghur Congress – have left China to...

China has finally admitted that its soldiers indeed suffered casualties in the barbaric India-China border clash in Galwan Valley. The...