After Syria, Russia Deploys S-300 Missiles in Venezuela To Counter US Threats

According to satellite images released by an Israel-based organization and Iranian media reports, Russia has deployed S-300 air defence system in Venezuela. Russia has earlier placed the S-300 missiles in Syria to defend the country against west-back aggression.

According to Image Satellite International (ISI), photos show the Venezuela military was deploying the missile system to Captain Manuel Rios Airbase in the Guarico state, a key airbase south of the capital Caracas.

It also said that the armed forces put the missile system into operational readiness following a military drill back in February. 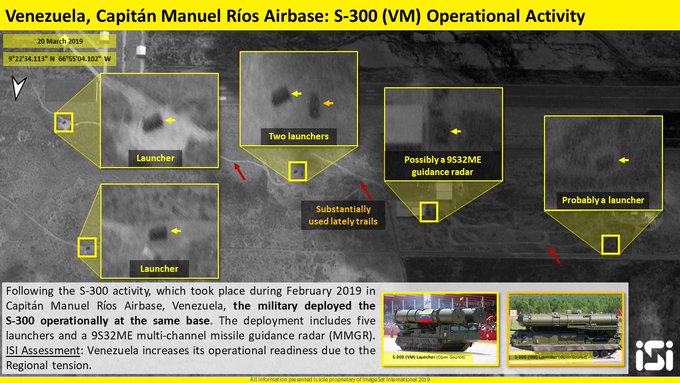 The reports came days after the government of President Nicolas Maduro confirmed the deployment of two Russian planes to Caracas. Immediately afterwards, the United States accused Russia of the “reckless escalation” of the situation in Venezuela, which has plunged into political chaos since US-backed opposition figure Juan Guaido declared himself “interim president” late in January.

Russia later said it had sent military experts to the country based on a military-technical cooperation agreement signed by the two countries in 2001.

Russia, which is involved in defence cooperation with Caracas based on bilateral contracts, has pledged to do “everything required” to support the elected government of Maduro.

The administration of US President Donald Trump, which immediately recognized Guaido as the leader of Venezuela after his self-proclamation, has repeatedly threatened to use military force to topple the Maduro government.

Under a deal made between Moscow and Caracas back in 2009, Russia agreed to lend Venezuela over $2 billion to purchase tanks and an S-300 missile system. The oil-rich country has also purchased over $4 billion in weapons from Russia in recent years.