According to satellite data published by US space agency National Aeronautics and Space Administration (NASA), air pollution over northern parts of India plunged to a 20-year-low for this time of the year. 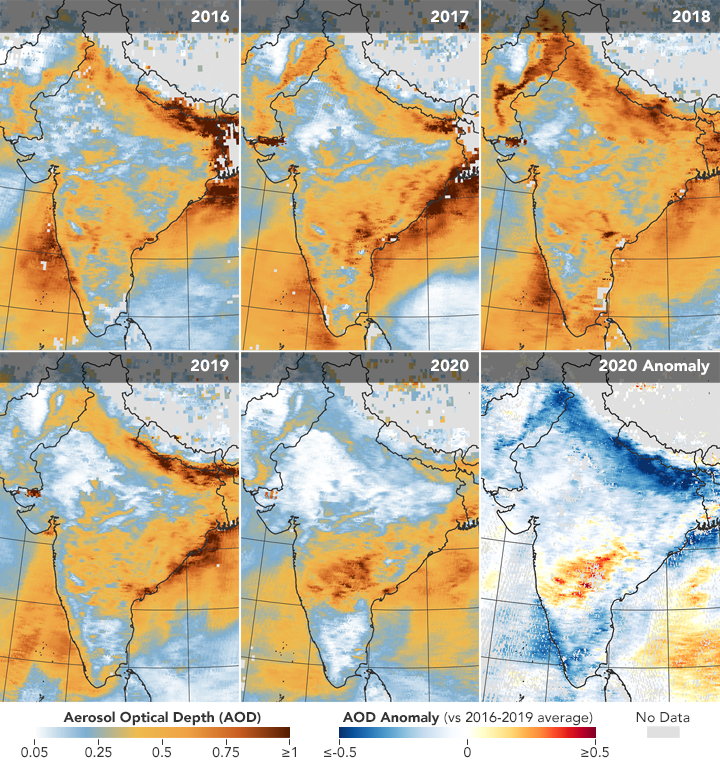 India accounts for the highest pollution-related deaths in the world with more than 2 million fatalities every year, according to a December 2019 report by the Global Alliance of Health and Pollution.

The US space agency’s satellite sensors observed aerosol levels at a 20-year low after PM Modi’s decision to impose a pan-India lockdown to contain the spread of the novel coronavirus.

If aerosols are concentrated near the surface, an optical depth of 1 or above demonstrates very hazy conditions. An optical depth, or thickness, of less than 0.1 over the entire atmospheric vertical column is considered “clean.”

The data were retrieved by the Moderate Resolution Imaging Spectroradiometer (MODIS) on NASA’s Terra satellite. Aerosols are tiny solid and liquid particles suspended in the air that reduce visibility and can damage the human lungs and heart

India was brought under a strict lockdown on March 25 to curb the spread of the deadly virus. Due to the lockdown, there was a massive decline in activities at factories and industries and with flights and trains canceled and offices, schools and universities shut, there was a substantial reduction in pollution.

Every year, aerosols from anthropogenic (human-made) sources contribute to unhealthy levels of air pollution in many Indian cities.

Pawan Gupta, a scientist at NASA’s Marshall Space Flight Center said,’’ We knew we would see changes in atmospheric composition in many places during the lockdown but I have never seen aerosol values so low in the Indo-Gangetic Plain at this time of year.’’

Gupta also studied the aerosol levels after the showers and March 27 and was surprised to see aerosol levels not rising as they normally do.”After the rainfall, I was really impressed that aerosol levels did not go up and return to normal. We saw a gradual decrease and things have been staying at the level we might expect without anthropogenic emissions,” Gupta said.

India is the World’s Second Most Polluted Country, But Which Asian Country Tops the List?

Apart from the improvement in air quality, rivers in India seem to have a breath of fresh life in them. India’s pollution monitoring body said the water in river Ganga had even become fit for bathing in some areas, according to real-time monitors placed along the 2,575-kilometer (1,600-mile) long river.

A recent analysis by the Delhi Pollution Control Board found that the quality of the Yamuna River flowing along New Delhi has also improved during the lockdown. The report stated a decrease in runoffs from 28 industrial clusters and reduced garbage dumpings.

Although northern India has shown improvements in aerosol levels, in south India the situation is not the same. In fact, data shows aerosol levels have not yet decreased to the same extent, and levels seem to be slightly higher in comparison to the past four years.

Helsinki Declared the Cleanest City in Europe; Paris One of the Dirtiest

The reasons remain unclear but could be caused due to recent weather patterns, agricultural fires, winds, or other factors. Robert Levy, program leader for NASA’s MODIS aerosol products also spoke about the lockdown and its effects and called it a ‘’ model scientific experiment.’’

He added, ‘’We have a unique opportunity to learn how the atmosphere reacts to sharp and sudden reductions in emissions from certain sectors. This can help us separate how natural and human sources of aerosols affect the atmosphere.”

Despite the positive news, experts have warned that improvement in air and water quality might be shortlived as the government eventually ends the lockdown, and the economic activity return to normal.

Anumita Roychowdhury, executive director at the Center for Science and Environment, suggests that companies should support work from home after the end of the lockdown to reduce their contribution to air pollution.

While this may be feasible, it would be impossible to run factories and industries without workers, the latter being poor and naturally prioritizing a meager salary to make ends meet over clean air and water. As their logic goes, clear air does not feed an empty stomach.

Penned By Armaan Srivastava  With Inputs from Kasha Patel.