Unveiled in 2015, the Russia T-14 Armata is the world’s third post-war generation tank. One of the hallmarks of this tank is its unmanned turret that ensures the safety and protection of the crew in the event of an enemy attack.

BrahMos-II Missile: How India’s Hypersonic Missile Program Will Get A ‘Big Boost’ From Russian Technology?

Developed by Russian company Uralvagonzavod (UVZ), the T-14 Armata is a new generation main battle tank (MBT) for the country’s military. The UVZ is a subsidiary of Rostec, a state-owned industrial conglomerate.

The T-14 is specifically designed for conducting offensive roles in direct-action operations. The tank can also be deployed for aiding the offensive efforts of motorized rifle sub-units and for neutralizing enemy encampments and troops which are operating in open spaces.

The main armament of the tank includes a 125 mm smoothbore cannon, the 2A82-1M, which can fire anti-tank guided missiles (ATGMs).

The T-14 features a range of state-of-the-art onboard equipment including a combat information and control system, radar stations, among others. The tank also comes equipped with a unified tactical control system. 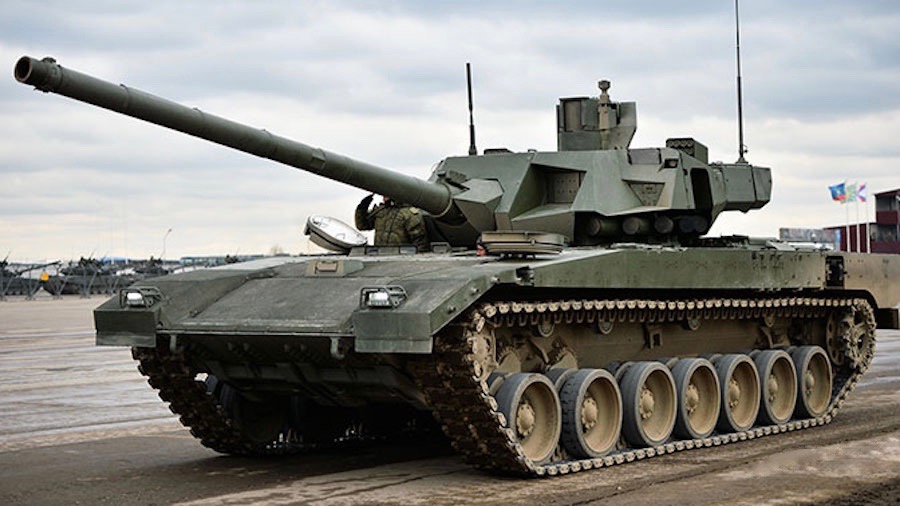 Its unmanned turret includes the smoothbore main gun with fully automated loading. According to National Interest, the driver, gunner and tank commander can be accommodated in a crew compartment that is located in an armored capsule at the front portion of the hull.

Thus, they remain isolated from the automatic loader and the ammunition storage in the center of the tank, a system to protect the crew when the tank is hit.

Traditionally, the tank is crew operated, however, a completely unmanned version of the Armata tank had also been tested, according to an announcement made by Rostec’s Deputy General Director Vladimir Artyakov in an interview with the Russian newspaper, Krasnaya Zvezda.

“Armata tank was originally designed as a crew-driven vehicle. But the level of modern technology today makes it possible to turn it into a drone – we carried out the appropriate tests and they were successful,” Artyakov was quoted as saying.

Samuel Bendett, an expert on the Russian military with Center for Naval Analyses, a Russian think tank, said that potential buyers of the T-14 Armata include the UAE, Egypt, and India.

“Algeria may be a potential customer too, given that it already has sophisticated Russian military hardware, such as the recently-delivered Terminator anti-tank vehicle.

Finally, India is a key destination for Russian military high-tech, such as the T-90 tank,” Bendett previously told Forbes magazine.

The EurAsian Times had earlier analyzed how the T-14 Armata tanks are capable of operating under extremely low temperatures such as -50 degrees Celsius as it is equipped with mobile power stations which ensure immediate and smooth working of the engine even in extremely cold weather.

“This new feature would be advantageous for India to deploy the tank — provided it decides to buy it — in extreme-cold regions like Eastern Ladakh where the mercury plummets to -40 degrees Celsius in the winter,” Mansij Asthana had written for The EurAsian Times.

The tests of T-14 Armata tank are expected to be completed in 2022, a defense industry source told Sputnik. “State tests of the new T-14 tanks continue with positive results. According to the plan, they should be completed in the first half of 2022”, the source said.

In August, Russian Deputy Defense Minister Aleksey Krivoruchko said that the Russian armed forces were going to receive 20 T-14 Armata tanks before the end of the year.

In February, Alexander Mikheyev, the head of Russia’s state arms exporter Rosoboronexport, said that six countries had expressed interest in purchasing the Armata tank, which could become the main battle vehicle in their armed forces.