Article 370 Abolished; Now You Can Buy Land In Jammu and Kashmir

Article 370 has been abolished in Jammu and Kashmir, as it was speculated by the EurAsian Times. Indian Home Minister Amit Shah has announced that the government has decided to abolish Article 370 of the Constitution which grants special status to Jammu and Kashmir. 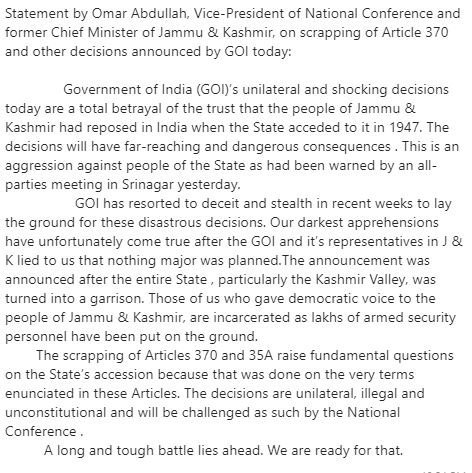 Shah’s announcement was immediately followed by a massive uproar in the Upper House with opposition MPs protesting in the Well of the House.

Back in the Kashmir Valley, three of Kashmir Valley’s most prominent politicians including two former CM’s – Mehbooba Mufti, Omar Abdullah and Sajjad Lone are under house arrest amid a massive security-built up in the state.

Internet services and mobile services have been suspended in several places and all public gatherings are banned in Srinagar district as section 144 was imposed from midnight.

Article 35A Abolished – Will That Be Highlight Of PM Modi’s Speech On 15th August?

Politicians Arrested, Internet Suspended, Curfew Like Situation: What Next In Kashmir?

Rumours are spreading in the Kashmir Valley that the Central government could be heading towards a complete abrogation of this piece of legislation. Some have even speculated that the matter could be a part of PM Narendra Modi’s Independence Day address at the Red Fort.

What is Article 370 that New Delhi has abolished?

2. In 1949, the then PM Jawaharlal Nehru commanded Kashmiri politician Sheikh Abdullah to consult Dr BR Ambedkar to develop the draft of a suitable article to be included in the Constitution.

3. Article 370 was eventually drafted by Gopalaswami Ayyangar who was a minister without portfolio in the first Union Cabinet of India. He was also a former Diwan to Maharajah Hari Singh of Jammu and Kashmir

4. Article 370 is drafted in Amendment of the Constitution section, in Part XXI, under Temporary and Transitional Provisions. The original draft explained – “the Government of the State means the person for the time being recognised by the President as the Maharaja of Jammu and Kashmir acting on the advice of the Council of Ministers for the time being in office under the Maharaja’s Proclamation dated the fifth day of March 1948.”

5. On November 15, 1952, it was changed to “the Government of the State means the person for the time being recognised by the President on the recommendation of the Legislative Assembly of the State as the Sadr-i-Riyasat (Governor) of Jammu and Kashmir, acting on the advice of the Council of Ministers of the State for the time being in office.” Under Article 370, the Indian Parliament cannot increase or reduce the borders of the state.