ASEAN (Association of Southeast Asian Nations) countries are wary of China’s growing influence in the region and prefer the US to China in the ongoing Washington-Beijing rivalry, a survey shows.

WATCH: Videos Of A ‘UFO’ Lighting Up The Florida Sky Send Netizens Into A Frenzy

The findings would be a setback for Beijing which has been trying to woo the Southeast Asian countries through its vaccine diplomacy. According to the survey conducted by the ASEAN Studies Centre at Singapore’s ISEAS-Yusof Ishak Institute, about 76% of respondents believe China was the most influential economic power in the region.

A majority of the respondents did not have trust in China as a global power. About 63% said they have little confidence or no confidence that Beijing will do the right thing for the global community and only 16.5% feel confident.

Over 80% of respondents in Laos, Thailand, Singapore, Myanmar, and Cambodia chose China over the US, the European Union, and Japan. Among them, 72.3% said they were worried about China’s growing regional economic influence.

The study also shows 61.5% of respondents would choose Washington over Beijing if they were forced to pick sides in the ongoing US-China rivalry. Support for the US increased by 7.9 percentage points from last year’s survey.

“The region’s support for Washington may have increased as a result of the prospects of the new Biden administration,” according to the report.

Over 1,000 people, including academics, government officials, and businesspersons across the 10 nations of the ASEAN bloc had taken part in the survey conducted, between November 2020 and January 2021. 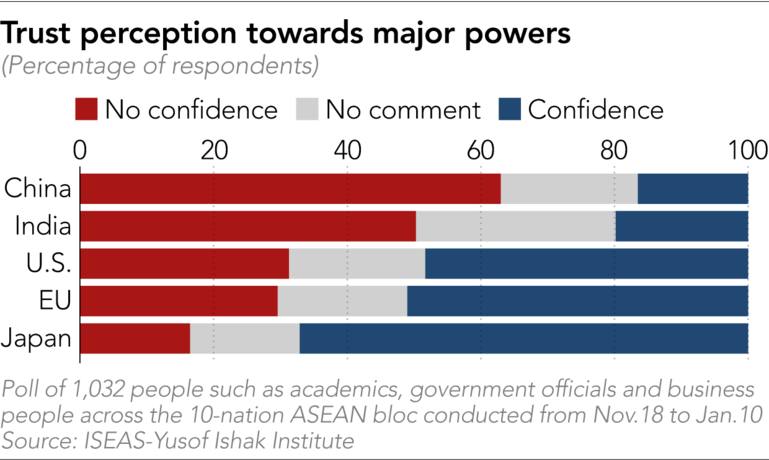 The report says: “The region’s trust deficit in China is trending upwards. China is the only major power that has increased its negative ratings, from 60.4% in 2020 to 63.0% in 2021. China’s predominant economic and political influence in the region has created more awe than affection”.

The report based on the survey findings reveals that “the majority worry that such economic heft, combined with China’s military power, could be used to threaten their country’s interest and sovereignty”.

The lack of confidence in China from ASEAN members shows that its vaccine diplomacy hasn’t worked. It is important to note that the respondents, despite their negative view on China recognized that Beijing had provided the most help to the region during the Covid-19 pandemic. China had aimed to inoculate up to 70 percent of the region’s 648 million people against Covid-19. The ASEAN countries, in a bid to curb the coronavirus spread, struck deals with China through a combination of government funds, donations from local businessmen, Chinese and Western largess, and investment deals.

While the Chinese vaccine does not have approval from the World Health Organization (WHO) and has been rushed out for emergency use, Indonesia, Malaysia, Myanmar, the Philippines, and Thailand flagged the greatest need for the vaccine.

Reports suggest Indonesia has already received 3 million ready-to-use vaccines and 25 million bulk vaccines from China’s Sinovac Biotech. Malaysia has been among the biggest takers of the Chinese vaccine. It was in talks to secure 23.9 million doses from Sinovac and another Chinese manufacturer CanSino Biologic and has secured 14 million doses. The Philippines have secured 25 million doses.

Myanmar was promised 300,000 doses and Chinese Foreign Minister Wang Yi had said Beijing would donate 500,000 doses to the Philippines. So far, it has secured 25 million doses.

China enjoys the maximum popularity in Laos and Cambodia because of its wide-scale influence. While the region doesn’t have as many Covid-19 cases, Beijing has promised to “ensure the safety” of Laos against the pandemic and offered Cambodia an initial one million doses.

The reports have suggested that other ASEAN members like Vietnam and Singapore have turned to the American-German Pfizer-BioNTech vaccine, AstraZeneca, and COVAX.