An Australian senator has been vehemently criticised after he blamed New Zealand shooting on Muslim immigration. The attack, which left 49 people dead from various nationalities, Fraser Anning tweeted: “Does anyone still dispute the link between Muslim immigration and violence?” 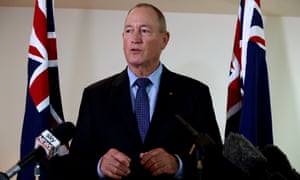 In a statement shared by an Australian journalist on Twitter, the Queensland senator also wrote: “As always, leftwing politicians and the media will rush to claim that the causes of today’s shootings lie with gun laws or those who hold nationalist views, but this is all cliched nonsense.

“The real cause of bloodshed on New Zealand streets today is the immigration program which allowed Muslim fanatics to migrate to New Zealand in the first place.”

The remarks were denounced by the UK home secretary, Sajid Javid, who accused the senator of stoking extremism. “At a time for grieving and reflection, this Australian senator … fans the flames of violence and extremism,” he tweeted.

“Australians will be utterly ashamed of this racist man. In no way does he represent our Australian friends.”

Australia’s prime minister, Scott Morrison, said: “The remarks by Senator Fraser Anning blaming the murderous attacks by a violent, rightwing, extremist terrorist in New Zealand on immigration are disgusting. Those views have no place in Australia, let alone the Australian parliament.”

The former Australian prime minister Malcolm Turnbull wrote: “Fraser Anning’s comments today are contemptible. He is a disgrace to the Senate and, what is worse, by spreading hatred and turning Australians against each other, he is doing exactly what the terrorists want.”

Tony Burke, a frontbencher in Australia’s Labor party, said Anning’s comments amounted to “hate speech” and were “horrific and sick”.

Burke told Australia’s ABC that “the normalisation of bigotry is something that is not only confined to him … We need to call it out, we need to make sure that no way any member of parliament fosters it. He wants the conflict and he wants the notoriety”.

Turkey has announced that it is postponing a much-anticipated Afghan peace conference in Istanbul until the end of the Muslim holy month of Ramadan. "We...
Read more
Load more