China’s resolve to have a “world-class military” by 2049 has remained a concern for the US, especially now, when both the countries are engaged in a raging conflict.

The US Secretary of Defense Mark Esper has previewed US Navy’s plans to counter the People’s Liberation Army’s (PLA’s) increasing maritime clout, especially in the South China Sea. He dubbed the long-awaited Navy plan as “Battle Force 2045.”

“The Chinese Communist Party … intends to complete the modernization of its armed forces by 2035 and to field a world-class military by 2049,” Esper said in his remarks at the Center for Strategic and Budgetary Assessments in Washington, DC. “At that time, Beijing wants to achieve parity with the United States Navy, if not exceed our capabilities in certain areas and to offset our overmatch in several others.”

The goal: OVERWHELMING fires balanced across four domains: from the air, from the land, from the sea, and under the sea. pic.twitter.com/YpdieWn9Hf

While he said that the submarines fleet is the top priority, he dubbed the aircraft carriers as the “crown jewels of the Navy”.

‘Nuclear-powered carriers will remain our most visible deterrent with the ability to project power and execute sea control missions across the globe,” Esper said. “To continue enhancing their survivability and lethality, we’re developing the air wing of the future capable of engaging at extended ranges.”

He emphasised the need for more number of light carriers that support short takeoff/vertical landing aircraft such as the F-35B joint strike fighter.

“Light carriers provide additional presence and capacity to carry out day-to-day missions and free up super-carriers for more critical high-end fights,” Esper said. “While we anticipate that additional study will be required to assess the proper high/low mix of carriers, eight to 11 nuclear-powered carriers will be necessary to execute a high-end conflict and maintain our global presence with up to six light carriers joining them.”

Up to 6 light carriers that will support short-takeoff or vertical landing aircraft.

However, experts have shared their apprehensions for Esper’s plan for large-deck, nuclear-powered carriers that would suffer potential cuts.

Esper gave the example of the USS America large-deck amphibious warship which he said is a platform that can be looked at for more light carrier duties. It is also capable of carrying more than a dozen F-35B jump jets, he noted in his speech. 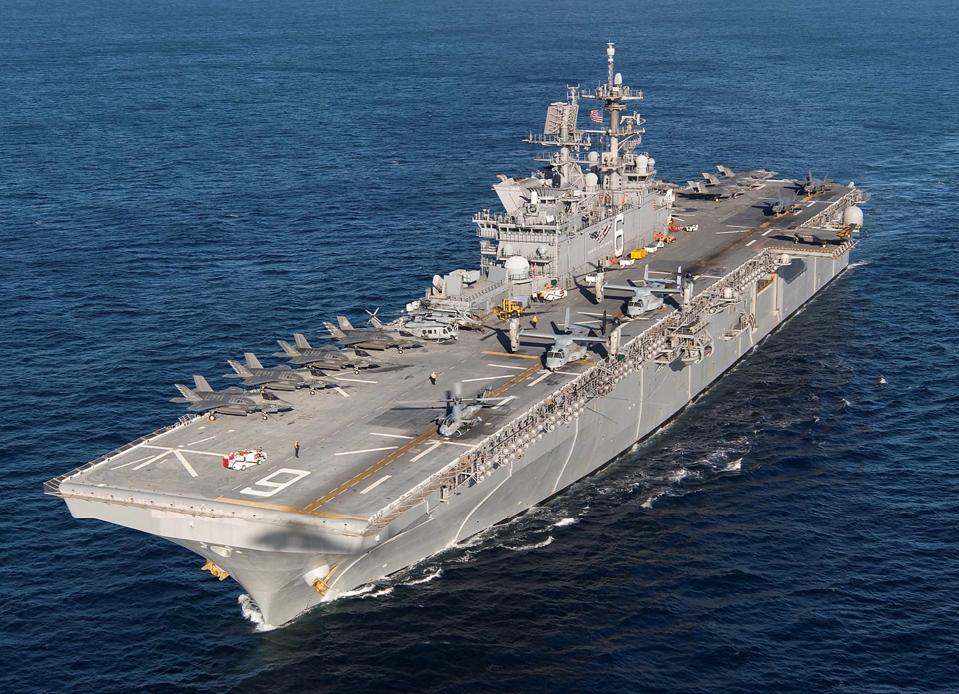 USS America at Sea. Via: Wikipedia

Loren Thompson of the Forbes said it’s a “bad idea”. He argued that if the number of large-deck carriers fell to the lower part of Esper’s range, say eight or nine, the Navy could only keep two supercarriers forward deployed on a typical day.

“Europe, the Persian Gulf, or the Western Pacific would have to make do with smaller carriers for long stretches. The number of large-deck carriers the Navy actually operates today, 11, is about as low as it can go while assuring continuous presence in all three regions, given training, transit and maintenance requirements for the Navy’s biggest warships,” he noted.

But does it get the number of ships right? I don't know about that, but I do know about amphibs. And the right number of amphibs is 55.

Thompson pointed out that while large deck carriers run on nuclear power, the lightweight ones use fossil fuel which eventually affects the agility of the carrier. He indicated that the large-deck carriers of the Nimitz and Ford classes have a maximum speed of 35 miles per hour, which is 40% faster than others.

“Thus the large-deck can cover a lot more ocean, moving up to 700 miles in a day. It also has unlimited endurance at sea, whereas a light carrier based on USS America would necessarily be tethered to its supply chain of fuel-carrying tankers.”

Another disadvantage is the number of fighter jets that the carrier can host. While the USS America can hold “more than a dozen” aircraft, it is still incomparable to large deck, nuclear-powered carriers that are capable of hosting “multiple squadrons of F/A-18 or F-35 strike fighters, a squadron of electronic attack aircraft, a squadron of radar planes, and various rotorcraft.”

“The total number of aircraft typically exceeds 70,” wrote Thompson. This decreases the lethality of the carriers in a serious confrontation. “The smaller size of the vessel would make it more susceptible to being disabled by enemy attack. There would be fewer defensive systems, fewer watertight compartments, and fewer opportunities to work around damage to the flight deck.”

Thompson concluded saying that while Esper’s defence strategy for China’s military modernisation is “understandable”, it is unclear that how cutting large deck carriers from the US Navy and replacing it with more lightweight carriers would solve problems faced by the Defence planners.