Mumbai the Hub of Billionaires in India, New York the Global Hub

Which country has the maximum number of Billionaires in the World? What is the quantity of Billionaires in India, in comparison to USA and China? The world’s billionaire population and their combined wealth touched record heights in 2017, encouraged by powerful performances across major economies, according to a report by Wealth-X.

The number of billionaires in the world reached to 2,754 an increase of 15% from the last year. Their total wealth, which incorporates public and private holdings, all liquid assets, real estate and any other luxury assets increased by 24.4% year-over-year to a whopping USD 9.2 Trillion.

The United States (680) continued to dominate the list of billionaires, following by China (338, excluding Hong Kong), Germany (152), India (104) and Switzerland (99). In terms of cities, New York (103) has the maximum number of billionaires in the world, followed by Hong Kong and San Francisco. Indian financial capital city of Mumbai and China’s Shenzen has 39 billionaires each. 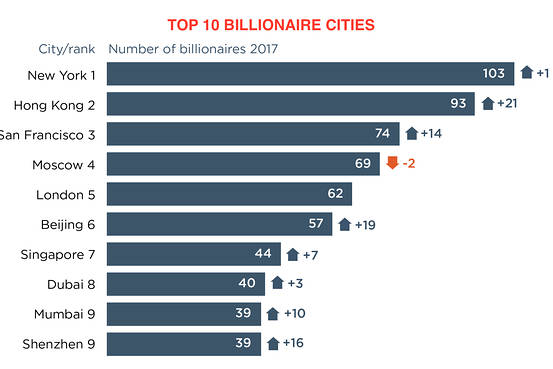 ILLUSTRATION: WEALTH-X
Must Read at EurAsian Times:  With Anti Islam Drive, Hui Muslims in China Under Severe Threat and Persecution
Previous article
Not Informal, Putin-Modi Summit in Sochi a “Sochi-Samjhi” Meeting
Next article
Which Third Country Has Moved Its Embassy from Tel-Aviv to Jerusalem?