Boeing F/A-18 Super Hornet deal with the Indian Navy could be on track. The US aerospace giant and the US Navy have proved that the F/A-18 Super Hornet can operate from a “ski jump” ramp, demonstrating the fighter jet’s suitability for India’s aircraft carriers.

The demonstrations, held at Naval Air Station Patuxent River, MD, show that the Super Hornet would do well with the Indian Navy’s Short Takeoff but Arrested Recovery (STOBAR) system and validate earlier simulation studies by Boeing, the company claims.

STOBAR is a system used for the launch and recovery of a fighter jet from the deck of an aircraft carrier. The system combines the elements of Short Take-Off and Vertical Landing (STOVL) with Catapult-Assisted Take-Off But Arrested Recovery (CATOBAR).

Both of India’s aircraft carriers — the serving INS Vikramaditya and INS Vikrant that is undergoing trials — have the STOBAR configuration, and no deal for the Super Hornets can move forward till the Indian Navy is sure of the fighter’s compatibility with the carriers.

The demonstration is clearly a major step forward for India’s acquisition of the F/A-18 Block III Super Hornet fighter jets, the advanced version of the F-18 fighters. Over the years, the Hornets have proved their mettle and are considered one of the most competent 4th generation jets.

The twin-engine, multirole, carrier-capable Boeing F/A-18 Super Hornet fighter is a variant of the McDonnell Douglas F/A-18 Hornet. As per Boeing, the Hornets have earned a reputation of being among the most lethal, advanced, combat-proven, multi-role frontline fighters in service today.

The Super Hornet possesses the ability to carry air-to-air missiles as well as air-to-surface weapons, while also possessing an internal 20mm M61 rotary cannon that helps it to carry the missiles.

According to Boeing Defense India (BDI), the Block III variants have the ability to perform in virtually every mission in the tactical spectrum. 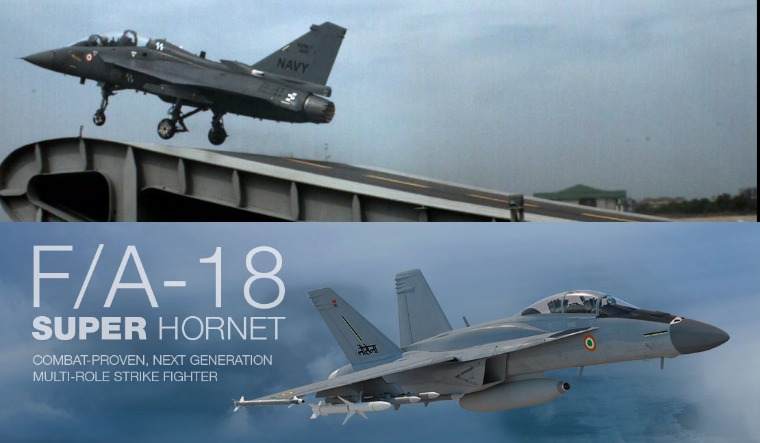 Speaking at a webinar on Monday, Kanaglekar said,

“The F/A-18 Block III Super Hornet will not only provide superior warfighting capability to the Indian Navy but also create opportunities for cooperation in naval aviation between the United States and India,”

“The F/A-18 Block III Super Hornet will offer unrivaled growth potential to the Indian Navy through single and two-seater carrier compatible variants and the ability to interface with the P-8I as a force multiplier.”

As per Boeing, the Block III Super Hornets have low acquisition and maintenance costs. Moreover, the Indian Navy will benefit from the multi-billion-dollar investments made by the US Navy and several international customers, towards the new technologies of the fighter jets.

As part of the aircraft company’s proposed “By India, for India” sustainment program, the Block III Super Hornets can be serviced in partnership with the Indian Navy as well as India and US-based partners throughout the lifecycle of the aircraft.

This will in turn further contribute towards developing expertise in aircraft maintenance in India, which will lead to higher availability of the plane, at competitive pricing as well as a reduced risk for the Indian Navy.

The Indian Navy has not made any official statements yet.