As the Russia-Ukraine war brings armored warfare back in focus, the British Army has announced that its Challenger tank upgrade project kicked off at Armstrong Works facility in Newcastle, northeast England.

The move follows Rheinmetall BAE Systems Land (RBSL), the main contractor for the upgrade project, awarded a $33m sub-contract to Pearson Engineering to fabricate the turret structures for the new Challenger 3.

“The turret fabrication being conducted by Pearson Engineering is crucial for the delivery of a fully digitized turret, ensuring that our modernized main battle tank is the most lethal in Europe,” said Brigadier Nick Cowey, the Senior Responsible Officer for the Challenger 3 program.

Under the $1.3-billion contract, RBSL will upgrade 148 Challenger 2 tanks to Challenger 3 variant, extending the platform’s out-of-service date to 2040. The first batch of Challenger 3s is expected to be delivered in 2027.

Once fielded, the Challenger 3 will be assigned to the 3rd Division, the British Army’s primary war-fighting formation.

Challenger 2s entered service with the British Army in 1994 and were used for combat operations in the former Yugoslavia and in Iraq, where they fared well.

Previous defense reviews have seen the number of tanks cut down from more than 500 to about 227, out of which, reports indicate that only about half of those are out of storage and ready to be deployed.

In 2019, the then-defense secretary, Penny Mordaunt, went as far as suggesting that Challenger 2s have become obsolete. She noted, “Challenger 2 has been in service without a major upgrade since 1998. 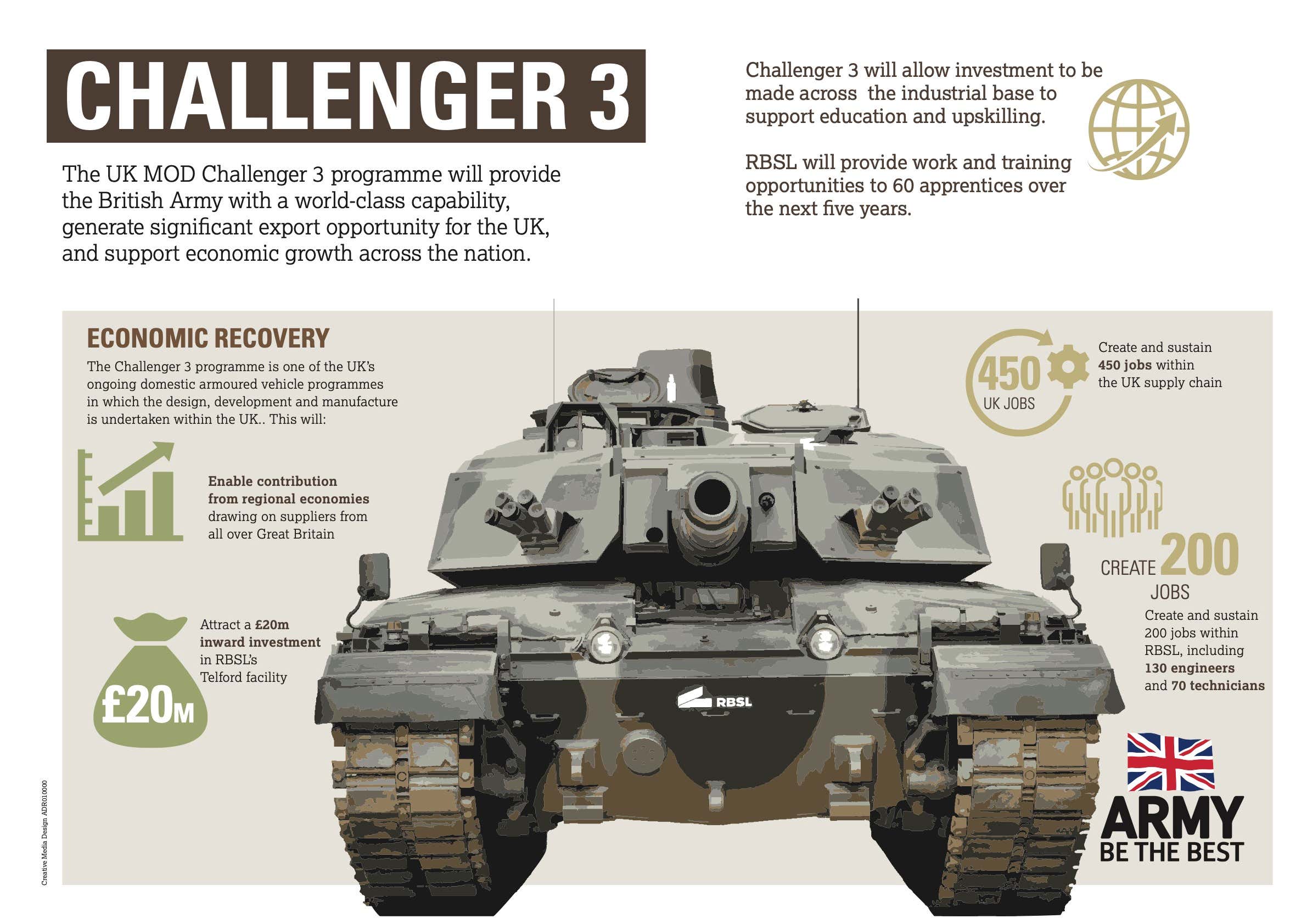 Challenger 3 Tank – Built For The Kill

The Army had been considering a number of options for the future of its fleet of tanks for almost a decade, which among others included buying German Leopard 2 tanks but at the end decided to upgrade the existing Challenger 2s with a new turret and gun.

The new turrets being worked on in the Armstrong Works facility are central to the decision to upgrade the Challenger 2 with the purpose of increasing its lethality against modern armor.

The newly rebuilt Challenger 3s will feature a new 120mm Rheinmetall L55A1 smoothbore gun that will replace the current 120mm rifled gun and will be able to fire munitions at a greater velocity with increased penetrating power.

The new main weapon will be able to fire multipurpose advanced programmable ammunition which means that the round can be programmed before firing to neutralize various types of structures, vehicles, or dismounted personnel.

This will help overcome the need for multiple ammunition to be carried, thus increasing the number of ‘ready rounds’ available for targeting whatever the vehicle may encounter.

“The steel structures will house the turret subsystems which will ensure Challenger 3 is a network-enabled, digital main battle tank with state-of-the-art lethality, upgraded survivability, plus world-class surveillance, and target acquisition capabilities,” the British Army added in a media release.

The new turrets are also planned to be exported such as for upgrades to in-service Challenger 2 Main Battle Tanks (MBTs) operated by Oman, as well as for other types of tanks.

The modernized tank will have an Israeli-made Trophy active protection system (APS) for enhanced protection comprising a small number of projectiles that can destroy incoming threats – anti-tank guided missiles (ATGMs), RPGs, anti-tank rockets, and tank HEAT rounds – before they hit the vehicle.

While the upgrade package will bring enhanced improvements to firepower and protection, there remains a question about mobility. The current Challenger 2 already weighs 82.7 tons with add-on armor modules, compared to 73.6 tons for the US Army M1A2 Abrams SEPv3.

The addition of Trophy APS would increase the weight of the vehicle between 1-3 tonnes and this weight will be added to the highest point of the vehicle and at the edge of the turret, where it will have the greatest effect on the vehicle’s performance.

Challenger 3 will be equipped with a new “digitized backbone” – as the British Army describes it – that will connect it to other combat vehicles within the Brigade Combat Teams (BCTs), improving the ability to share data with different platforms in real-time.

The ongoing Ukraine war represents the first time in decades that military forces are fighting a large-scale ‘conventional war’ in Europe bringing armored warfare back in focus.

The Challenger 3 effort is a part of the British Army’s Future Soldier modernization initiative which includes structural changes, based around a “lethal, agile, and lean” force of around 72,500 personnel by 2025 – down from 76,000 in 2021 – mainly organized around deployable BCTs.

Apart from Challenger 3s, by 2030, the Army is expected to operate a host of new land vehicles such as Ajax infantry fighting vehicles and Boxer wheeled armored personnel carriers among others.