Bollywood Actress Zaira Wasim, who quit the film-industry in June, is back in the spotlight after a 41-year-old Indian businessman was recently convicted of molesting  Wasim on a flight in 2017.

According to Wasim’s Instagram, a man named Vikas Sachdev molested her while she was ‘half asleep’ on her seat, on a flight from the capital, Delhi, to Mumbai in December 2017.

She explained how he repeatedly touched her inappropriately by moving his foot up and down her neck and back. “It continued for another five to ten minutes and then I was sure of it,” she said. “He kept nudging his shoulder and continued to 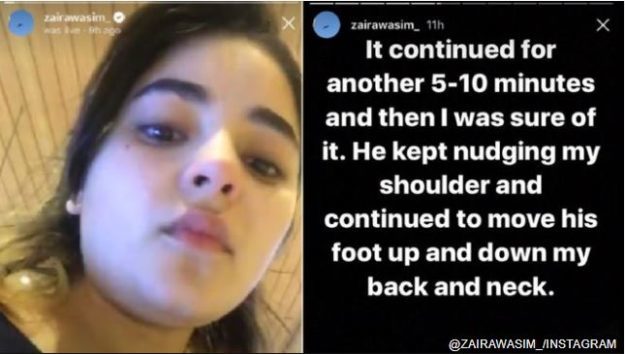 Wasim initially blamed the turbulence at first but was later awoken by his foot touching her neck. She shared a video of herself after the flight, in which she was visibly upset.

“This is terrible,” she said. “No one will help us if we don’t decide to help ourselves.” She tried to film but it was too dark to see his face. The police arrested him after he was reportedly identified with help from the airline.

Wasim had also accused the airline of not doing anything to help her when she raised the issue. But she did not file an official complaint against them. The airline, however, denied the charge and said they had ‘zero tolerance for such behaviour’.

Wasim debuted in a 2016 film with Amir Khan named, Dangal. The film became a huge success with the starlet garnering immense popularity, following which she was awarded the National Child Award for Exceptional Achievement.

However, in 2019 Wasim announced that she was quitting Bollywood because the profession “threatened” her relationship with God. Wasim documented her experience on Instagram and the post went viral.

Previous articleIran vs US: A High Stake Bet On Who Blinks First – OpEd
Next articleIndian Navy Expresses Anxiety Over Increased Chinese Presence In The Indian Ocean

The Fate Of The Furious: Russian Drills In The Arctic Displayed Unprecedented Firepower & Prowess: Watch

Remember the submarine scene from The Fate Of The Furious when the armed vessel surfaces out of the ice sheet after firing torpedoes and...
Read more

The US Space Force (USSF) is likely to launch its fifth ballistic missile early-warning satellite next month. Arch-rival Russia had launched its fourth satellite...
Read more