India successfully launched Chandrayaan-2 – or Moon Chariot 2 – which took off on time at 2:43 pm (0913 GMT) from the Satish Dhawan Space Centre on an island off the coast of Andhra Pradesh state.

The launch came a week after a fuel leak forced a previous attempt to be scrubbed 56 minutes before the scheduled blast-off. India is set to follow Russia (USSR), the United States and China in landing a spacecraft on the Moon.

President Ram Nath Kovind watched the launch alongside 7,000 dignitaries and flag-waving children. The rocket carried an orbiter, a lander and a rover, and has been almost entirely designed and made in India.

The 2.4-tonne (5,300-pound) orbiter is expected to circle the Moon for about a year, taking images of the surface, looking for signs of water, and studying the atmosphere. 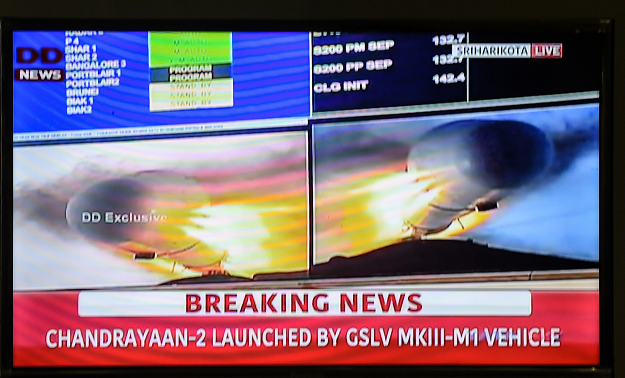 A television grab shows the launch of Chandrayaan – Moon Chariot 2 at the Satish Dhawan Space Centre in Sriharikota, an island off the coast of southern Andhra Pradesh state, in New Delhi on July 22, 2019. PHOTO: AFP

The lander – named after Vikram A. Sarabhai, the father of India’s space programme – will carry the rover and be placed on the surface near the lunar South Pole. The operation is expected to take place in early September.

ISRO scientists will remotely control the rover named Pragyaan – “wisdom” in Sanskrit – as it carries out experiments. It will work for one lunar day, the equivalent of 14 Earth days, studying rocks and soil on the Moon’s surface.

“We should keep in mind that space exploration is risky as many systems have failed in the past and many lives lost,” he told AFP. Aside from propelling India into the rarefied company of spacefaring nations, Chandrayaan-2 also stands out because of its low cost.

About $140 million has been spent on preparations for the mission, a much smaller price tag compared with similar missions by other countries.

The United States – which is marking the 50th anniversary of Neil Armstrong becoming the first human on the Moon – spent the equivalent of more than $100 billion on its Apollo missions.

Chandrayaan-2 and India’s space programme as a whole are a source of national pride. Prime Minister Narendra Modi has vowed to send a manned mission into orbit by 2022, and India also hopes to seek out lucrative commercial satellite and orbiting deals.

Previous articleDid US Mistakenly Shot-Down Its Own Drone Over The Strait of Hormuz?
Next articleTrump Offers To Mediate On Kashmir Dispute and Repair India and Pakistan Relations