Satellite images have revealed that the Chinese military is reportedly constructing a surface-to-air missile site as well as other infrastructure on the banks of the Mansarovar Lake in the India-Nepal-China tri-junction area near the Lipulekh pass. 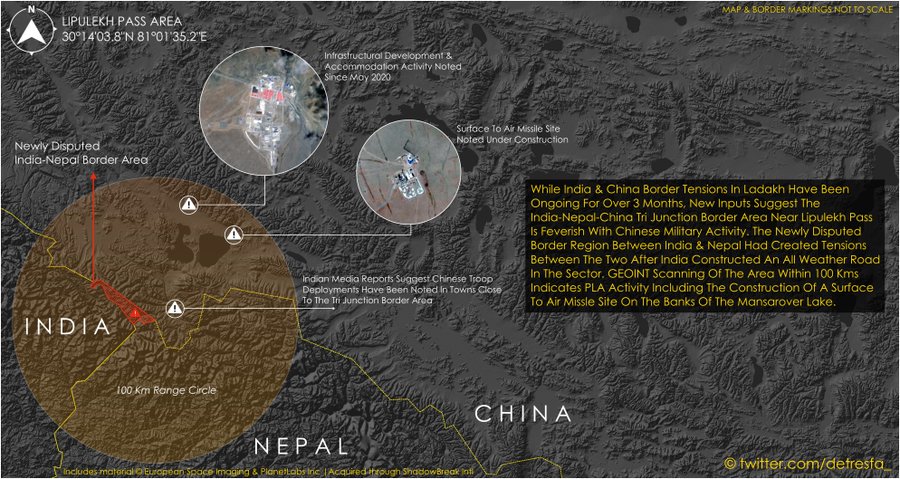 Satellite images shared by an analyst, show a village where new roads have been built and suspected red tents have been put up for accommodation.

A Surface-to-Air Missile (SAM) site on the banks of the Mansarovar can also be seen in the images. “There has been an accretion of PLA troops across the LAC at Lipulekh Pass, parts of North Sikkim and Arunachal Pradesh,” a top military commander said.

Earlier, the region of Lipulekh was mired in controversies. India’s road construction to Lipulekh lake at 17,000 feet had sparked a row between Kathmandu and New Delhi.

“We urge the Government of Nepal to refrain from such unjustified cartographic assertion and respect India’s sovereignty and territorial integrity,” a Ministry of External Affairs (MEA) spokesperson said.

Speaking to ThePrint, the analyst behind the satellite images said the surface-to-air missile site is an important discovery, as it indicates China is closing the gap for any perceived aerial threats in the region.

“Geospatial data collected over the last few months point to the construction of a SAM site, along with the possibility of troop accommodation in the nearby area,” he stated, adding that this development is around 100 km from the international border.

According to a comparison report between India and China’s air power, the PLAAF holds one of the world’s largest inventories of advanced long-range surface-to-air missile (SAM) systems incorporated into SA-20 battalions imported from Russia and indigenously-produced CSA-9 (HQ-9) battalions.

Media reports at the beginning of August have claimed that the PLA has moved a battalion of approximately 1,000 soldiers – at Lipulekh Pass. “It is a signal that the Chinese troops are prepared,” a second army officer said.

He added that India has matched the strength of the PLA troops and is keeping a close watch on Nepal in the context of its recent border claims. “The situation on the Line of Actual Control remains dynamic with the PLA trying to emphasize its presence beyond Ladakh by building infrastructure on their side of the LAC,” the top military commander quoted above said.

Tensions have been soaring between the two nuclear-armed neighbors after the Glawan valley conflict in June when the Chinese and Indian troops got into a violent clash that resulted in 20 Indian casualties and an unknown number on the Chinese side. Looking at the ongoing disengagement process through military and diplomatic talks, experts believe that the process will take longer to reach the point of total disengagement.

100+ Chinese Military Jets Inc. Fighters & Bombers Hold Drills Off Taiwan; US Wants Japan By Its Side To Fight China, Russia