As the India-China border-standoff in the Ladakh region now enters the 14th week, reports suggest that China is closely monitoring India’s strategic defense facilities including the Tezpur Airbase in Assam.

Chinese Version Of US Humvees Lambasted For Poor Performance After India-China Clash At Galwan Valley?

According to a report published by India Today, China is keeping a vigilant eye on India’s strategic facilities in the eastern sector, notably Tezpur Airbase in Assam and Abdul Kalam Islands in Odisha.

The reports come after India issued a Notice-to-Airmen (NOTAM) for a launch of an experimental flight vehicle in the Bay of Bengal from 20 to 22 August 2020, for an area of about 550 km off the coast of Odisha – similar to the one issued last year when India successfully tested Hypersonic Technology Demonstrator Vehicle (HSTDV).

The HSTDV project is run by DRDO for its futuristic hypersonic weapons delivery platform including the BrahMos-2 project. Apart from the Eastern coast, the Tezpur airbase in Assam is a combined Defense-Civilian airport that is home to the No.2 and No.106 Squadrons of the Indian Air Force, fielding the mighty Su-30 MKI air-superiority aircraft.

The IAF maintains strict vigil along the eastern border and Tezpur Airfield is one of the most important airbases in the region. 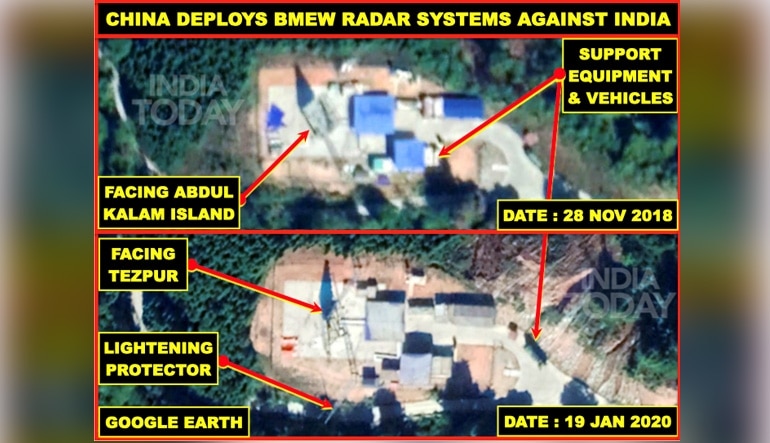 The news report claimed that their OSINT (Open-source intelligence) team analyzed the satellite images that indicate how China had established Radar and monitoring facilities in its Yunnan province bordering Myanmar. The report also speculated that China might not hesitate to use Myanmar’s airspace to conduct its activities against India.

Showing the images of the Radar station, the report claims that a radar station was established in March 2018, following the scuffle at the India-Bhutan-China trijunction at Doklam in 2017. The radar is said to be deployed only 3 kilometers from the Myanmar border, facing the Abdul Kalam Island test facility at India’s eastern coast and the Tezpur airfield.

The images shown feature a 13 meter wide, possibly a phased array radar, claimed to be similar to the Type-609 radar which was displayed at 2018 Zhuhai Air Show. The radar is manufactured by the 14th Institute of China Electronics Technology Group Corporation (CETC) and is said to detect stealth aircraft as well as ballistic missiles flying below the space limit.

“The elevation profile of this new radar indicates that anything that goes up beyond 2.5km height from these two important locations in India will be picked up by this radar”, it said.

The satellite imagery of the radar’s trials in Guangzhou in the Gansu province of central China revealed that it was being used in the monitoring of China’s WU-14 Hypersonic Glide Vehicle tests.

Along with the radar station, another site was picked up by the OSINT experts about 7 kilometers southwards from the location, which is claimed to be a Measurement and Control Facility. The satellite-communication (SATCOM) dishes and other equipment present in the base strongly suggest that it might have a role in directing Chinese ballistic missiles for mid-course corrections in its flight path towards India.