China Guarantees To Protect Pakistan’s Territorial Integrity At All Costs

Reaffirming the ‘All-Weather Strategic Cooperative Partnership’ between Pakistan and China, the two leaders exchanged views on the entire gamut of bilateral ties. They affirmed the resolve to further boost their strategic cooperative partnership in all fields including political, security, economic and trade, and people-to-people exchanges.

He said Pakistan would always support to China on all issues of its core interest. Khan thanked President Xi for the welcome accorded to the Pakistani delegation and for China’s steadfast support to Pakistan on all issues. 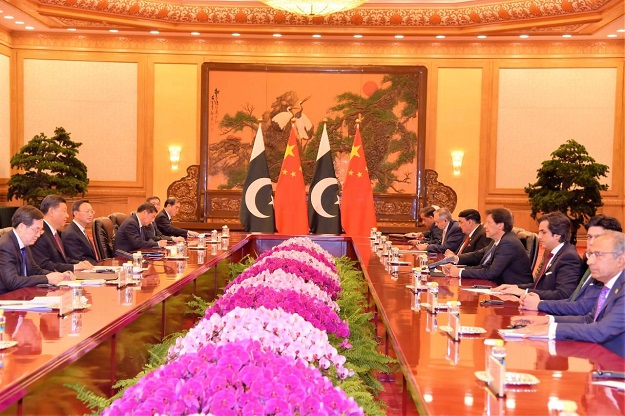 He asserted that China-Pakistan ties would continue to acquire greater strength and practical cooperation would be increased over time.

The two sides also exchanged views on the regional situation, including in Afghanistan and South Asia. President Xi appreciated Pakistan’s sustained and successful efforts in the fight against terrorism and to create a peaceful neighbourhood.

Both sides expressed satisfaction over the close cooperation between the two countries at multilateral fora and resolved to further deepen communication and coordination at all levels.

They also agreed to keep the momentum of high-level exchanges between the two countries. Prior to discussions with President Xi, the prime minister held a separate meeting with Chinese Premier Li Keqiang in Beijing. The two leaders sat down for delegation-level talks which focused on a range of bilateral issues, chief among them being CPEC and its related projects.

PM Imran and his counterpart witnessed the signing of the Main Line-1 railways’ agreement. In a statement from Beijing, Railways Minister Sheikh Rasheed hailed the agreement as a “great day in the history of Pakistan Railways”.

“Under the project, a double railway track will be laid from Karachi to Peshawar. The speed of trains that run on the new track will be around 160 kilometres per hour,” said the minister.

The meetings come a day after PM Imran reiterated Islamabad’s commitment to CPEC and said the mega-infrastructure project was “not a transaction but a transformation of Pakistani society”.

Addressing world leaders during the Leaders’ Roundtable session on Saturday, the second day of the Belt and Road Forum in Beijing, the premier said transformation brought by CPEC became possible due to the wisdom of China’s leadership and the hard work of the Chinese people.

“China is a great success of the modern age: achieving sustained growth, transforming society, improving the quality of life of a billion people. President Xi Jinping has given the Belt and Road Initiative (BRI) vision to break barriers, connect people, integrate economies and share prosperity,” said the prime minister.

It was a privilege for Pakistan, he added, to be an early partner of China. Under the CPEC project, he said, the country was building highways, modernising railroads, setting up power plants, establishing a port, and establishing Special Economic Zones.

According to the prime minister, the connectivity of Gwadar Port with China’s Xinjiang region will provide a shorter route for China’s imports compared to the South China Sea and reduce the cost for Chinese companies, and develop western regions of the Asian giant.

The premier arrived in Beijing on Thursday for a four-day official visit on the invitation of China’s President Xi Jinping. In his address during the opening ceremony of the forum on Friday, the prime minister presented five ways to further expand the BRI.

“Firstly, we must undertake joint efforts to mitigate climate change. In our Khyber Pakhtunkhwa province, we successfully planted a billion trees. I suggest we launch a joint project to plant 100 billion trees over the next two years so that we can mitigate the effects of climate change for our coming generations,” said PM Imran.

“Second, we should establish a BRI Tourism Corridor to promote people-to-people contacts and inter-cultural understanding. Thirdly, an office of Anti-Corruption Cooperation should be set up to combat the scourge of white-collar crime. White-collar crimes are devastating the world.”

“We should create a poverty alleviation fund that supplements national efforts in the fight against poverty and malnourishment. In Pakistan, we have recently launched a targeted poverty alleviation programme called ‘Ehsas’. The aim should be to emulate China’s spectacular success in lifting 800 million people out of poverty within a matter of decades,” said the PM.