In recent years, Turkey has been vehemently fighting for the leadership role in the Islamic world. The transformation of the Hagia Sophia from a museum to a mosque has smashed any hope for Ankara to join the European Union and has instead pulled it towards pan-Islamism.

EurAsian Times gets you a comprehensive analysis of Turkey-Pakistan relations and how Pakistan could get squeezed between China and Turley, two strongest allies of Pakistan.

The foundation of current Turkish-Pakistani ties was laid around 1918-1922 with the emergence of the Khilafat movement in India. It aimed to prevent the division of the Ottoman Empire by Great Britain and defending the very idea of the Islamic Caliphate. The movement aimed to bring Muslims together with the Hindus to fight against a common enemy during the Independence struggle.

The Khilafat Movement was founded by Shaukat Ali, Maulana Mohammad Ali Jauhar, Hakim Ajmal Khan, and Abul Kalam Azad in 1919 to restore the Ottoman Caliphate, which was considered the leader of Sunni Muslims as an effective political authority.

In their manifesto, the Khilafat Movement called for a fight against the British imperialism. This attracted various social groups of the population (peasantry, artisans, workers, small and medium-sized entrepreneurs, Islamic clergy) toward the movement.

This uprising was anti-colonial and anti-feudal. However, after 1922, the transition of Turkey to a secular state under Mustafa Kemal Atatürk halted the Khilafat Movement. It later became an elite organization advocating communal separatism.

Since Muslims living in British India provided financial support to the Kemalists during the Turkish War of Independence, Ankara in 1947 immediately established diplomatic relations with the newly formed state of Pakistan. There was also a personal factor. The founder of Pakistan, Muhammad Ali Jinnah, spoke highly of Ataturk. President Pervez Musharraf, who came to power in 1999, did the same.

Both countries provide continuous support to each other at the international level. In 1974 Pakistan was the only country to support the Turkish operation in Cyprus.

In 2003, during talks with his Turkish counterpart Recep Tayyip Erdogan, Prime Minister Shaukat Aziz said: “Whatever steps Turkey has outlined in relation to Northern Cyprus, we say that we support it without any reservations, we are 100% on the Turkish side”. President Pervez Musharraf also stated that “Pakistan fully supports the struggle of the Turkish Cypriots for their just cause”.

Despite the deterioration of bilateral relations in the 1990s (the reason being, Turkey supported the Northern Alliance, and Pakistan helped the Taliban), Turkish President Ahmet Necdet Sezer announced his support for Pakistan in the Kashmir conflict in 2001.

Recep Tayyip Erdogan stated in June 2003: “We believe that Pakistan’s actions to resolve the Kashmir problem are very positive and we highly appreciate them. Turkey fully supports Pakistan over the  Kashmir issue. The problem must be resolved as soon as possible. “

In February 2020, relations between Turkey and India deteriorated due to President Erdogan’s open support for Pakistan and the Kashmiri militants, as well as a pledge of the Turkish leadership to help Islamabad in the conflict with the Financial Action Task Force or the FATF (an intergovernmental organization that works to combat money laundering related to crime and terror financing).

At the same time, the President of Turkey did not comment on taking either side in his remarks on February 15, 2020: “The state and people of Turkey are in solidarity with the people of Kashmir, which is subjected to various forms of persecution. We are seriously concerned about the situation in the state, which has worsened despite the steps taken in the recent period. Turkey stands for the settlement of the Kashmir dispute through dialogue between Pakistan and India, based on UN resolutions and in accordance with the expectations of our Kashmir brothers. “

It is necessary to note the high level of cooperation between Turkey and Pakistan in the military sphere. During the Cold War, both countries were members of the CENTO military-political bloc. In 1988, the Turkish-Pakistani Military Advisory Group was established to exchange experiences in military education and the defence industry. In 2003, the Higher Military Dialogue organization was formed.

From time to time, Turkey and Pakistan have held joint military exercises. In the early 1990s, Pakistani F-16 jets were modernized in Turkey. In addition, over the past two years, Turkey has become the second-largest supplier of weapons for the Pakistan Army after China. In 2018, Pakistan purchased 30 Turkish T-129 helicopters worth $ 1.5 billion.

On 11 October 2019, the Prime Minister of Pakistan Imran Khan supported the operation of the Turkish troops “Peace Spring” in northern Syria. This was no coincidence, as Pakistan previously supported the Turkish Republic in the fight against the Kurdistan Workers’ Party.

Despite the evacuation of Fethullah Gülen’s supporters from staff, a network of Turkish-language schools and colleges operate in Pakistan under the Turkish Education Foundation. Also, Turkish dramas translated into Urdu and Dari are in high demand in Pakistan and Afghanistan. Tourism from Pakistan to Turkey is actively booming.

Turkey tried to mediate between Afghanistan and Pakistan. On the initiative of the Turkish side, a meeting between Afghan President Hamid Karzai and Pakistani President Pervez Musharraf took place in Ankara, on 29th April 2007, as a result of which the Ankara declaration on cooperation in various fields, including the fight against terrorism, was signed. “A joint group to coordinate efforts to build mutual trust” was also formed.

Taking place concurrently with the Istanbul Process which began in November 2011, these summits, however, could not achieve the main goal of resolving long-standing conflicts and enhancing relations between Pakistan and Afghanistan.

The failure to achieve this goal did not, in any way affect the Afghan-Turkish and Pakistani-Turkish relations, especially given the fruitful cooperation between Ankara and Islamabad in the Organization of Islamic Cooperation.

As in the case of Afghanistan, Turkey and Pakistan are brought together by the Sunni Islam of the Hanafi Madhhab. Pakistan’s membership in the Islamic G8 (D-8), which was established at the initiative of Turkey in 1997, plays an important role.

The biggest political problems between the two ‘iron brothers’ include the disagreements on the Uyghur issue who face persecution in Xinjiang region by the Chinese communist government.

Due to extremely close ties with China, Pakistan calls the rebels of Eastern Turkistan Islamic Movement as terrorists while Turkey has consistently criticized China for its obnoxious policies in Xinjiang. 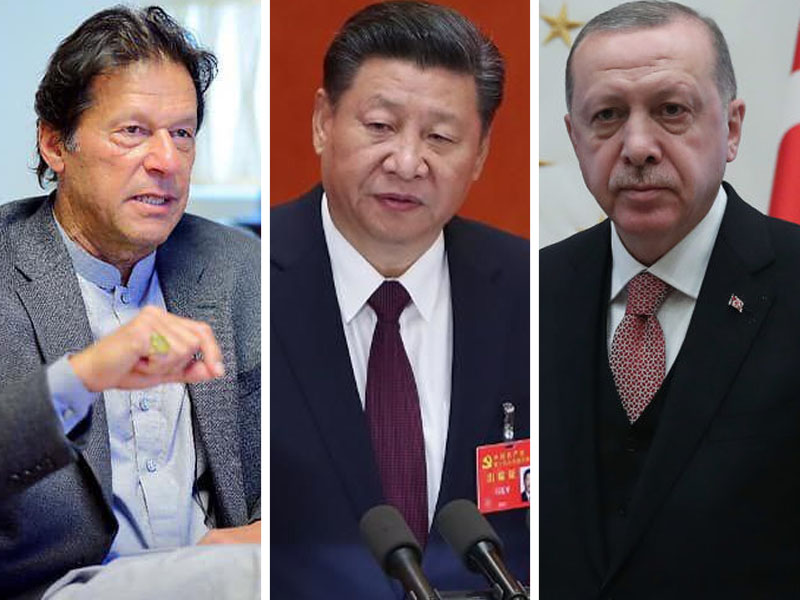 Later, President Erdogan slightly changed his position on the Uyghur issue out of a desire to strengthen economic ties with China, including through the China Pakistan Economic Corridor (CPEC). All this coincided with the deterioration of Turkey’s relations with the United States and the European Union while getting close to Russia.

Overall, it appears that Turkey under President Erdogan, with the backing of China and Pakistan, aims to achieve leadership role in the Islamic world and oust Saudi Arabia from this place.

Previous article
China Has Deployed Nuclear Weapons Near Indian Border, Can Hit Targets Within Minutes: PLA Officer
Next article
Israel Gets Nod To Develop ‘Iron Dome’ Missile Defense System For The US