Satellite images and new intelligence now suggests that China is moving towards permanently basing aircraft carriers in the contentious South China Sea. As per the image, the People’s Liberation Army Navy (PLAN) is establishing a strategic base in Hainan. 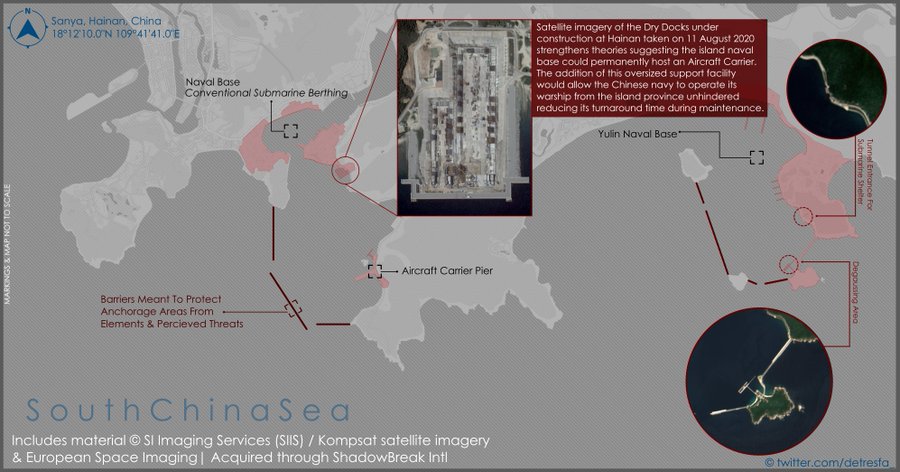 H I Sutton writing for the Forbes, observed that a “gigantic dry dock is being built, big enough for an aircraft carrier. Together with a pier already visited by the carriers, this suggests that they will be stationed there. Currently, the carriers spend a lot of their time further north.”

China currently has two aircraft carriers. CNS Liaoning, which was originally a Soviet-era vessel which is 67,500 tons, 999 feet long, and 246 feet across.

Sutton explained that while dry docks are important for maintaining warships in fighting conditions, aircraft carriers need special facilities to handle their size and the new one being built in Hainan is the “perfect size for China’s carriers.

It is much larger than would be expected for destroyers or submarines and is inside a protected harbor. All of this points towards the aircraft carrier hypothesis.”

The new dock is near another Chinese nuclear dock, the ‘Yulin’ naval base, which is further along the coast in the next bay. Yulin base is the only base from where Chinese submarines, especially the nuclear ones, can move into the deep ocean without being detected or intercepted.

The nuclear submarines on the base include China’s Type-094 ballistic missile submarines. A surveillance platform is also built by China along the coast in the South China Sea.

The US-China deteriorating relations have also lead to the US ramping up its military operations in the sea with China’s muscle-flexing in and around the South China Sea.

As reported earlier by EurAsian Times, the US military’s Indo-Pacific Command (INDOPACOM) confirmed that three B-2 stealth bombers from the 509th Bomb Wing at Whiteman Air Force Base, Missouri have been deployed Naval Support Facility on the remote island of Diego Garcia in the Indian Ocean.

The US Navy’s aircraft carrier Ronald Reagan also entered the South China Sea earlier this month and has also conducted air operations. The strike group includes the carrier, its air wing, the guided-missile cruiser USS Antietam, and the destroyers USS Mustin and USS Rafael Peralta. The base is seen as a deterrent for such moves by the US.