China has long been depending on the Russian aviation industry for its fighter jet requirements. However, Beijing’s reliance on Russia could soon be over if the latest photographs of the twin-seat variant of China’s J-20 stealth jets are anything to go by.

As if that were not enough, additional photographs have surfaced on social media showing China’s first carrier-based fighter plane. With these new developments, China appears to have already overtaken its “mentor” Russia.

According to a study published by the Royal United Service Institute (RUSI), a military think tank, China may have already surpassed the Russian warplanes.

The former’s increasing dominance in fighter jets technology is based on different factors such as large military budget, willingness to reverse-engineer existing technology, and cross-applicability of China’s well-developed civilian electronics industry to the manufacturing of advanced avionics.

On the contrary, sanctions imposed by the West on Russia have constrained Moscow’s access to components required for high-performance sensors. Chinese aircraft are outpacing their Russian counterparts in terms of design as well.

Any aircraft’s agility and speed can be improved by reducing its weight. Substituting lightweight composite materials for metal components is one of the most important weight-saving techniques in current aircraft design.

The usage of composites on a large scale can be costly and technologically challenging. Despite this, China is using composites in the J-11B, J-11D, and J-16 fighters, all of which are based on Russian Flankers. As a result, compared to the original Russian jets, the Chinese jets have a better thrust-to-weight ratio.

Spotted somewhere in a corner at the Zhuhai Air Show 😯… a conceptual artwork of the proposed two-seater J-20; sometimes called J-20AS or even J-20B.

So yet another step towards a formal unveiling or just an artwork? 🤔

The Active Electronically Scanned Array (AESA) radar is the current gold standard in sensor technology, with more range, higher resolution, and the capacity to sustain numerous tracks than its predecessors. AESA radars are much more difficult to detect, allowing for target searching without revealing one’s position.

China’s J-11B/D, J-15, and J-16 twin-engine fighters, J-10 single-engine fighters, and J-20 stealth aircraft are all equipped with AESAs. Meanwhile, Russia is lacking behind in terms of the operationality of AESA in its Su-57 stealth fighter and MiG-35.

Beyond-visual-range (BVR) warfare relies on missiles that can engage opponents at larger distances in addition to sensors and in the past few years, China has begun to deploy two advanced BVR missiles. The first is the PL-12, which has performance comparable to the US AIM-120C missile and outranges the Russian R-77 BVR missile. 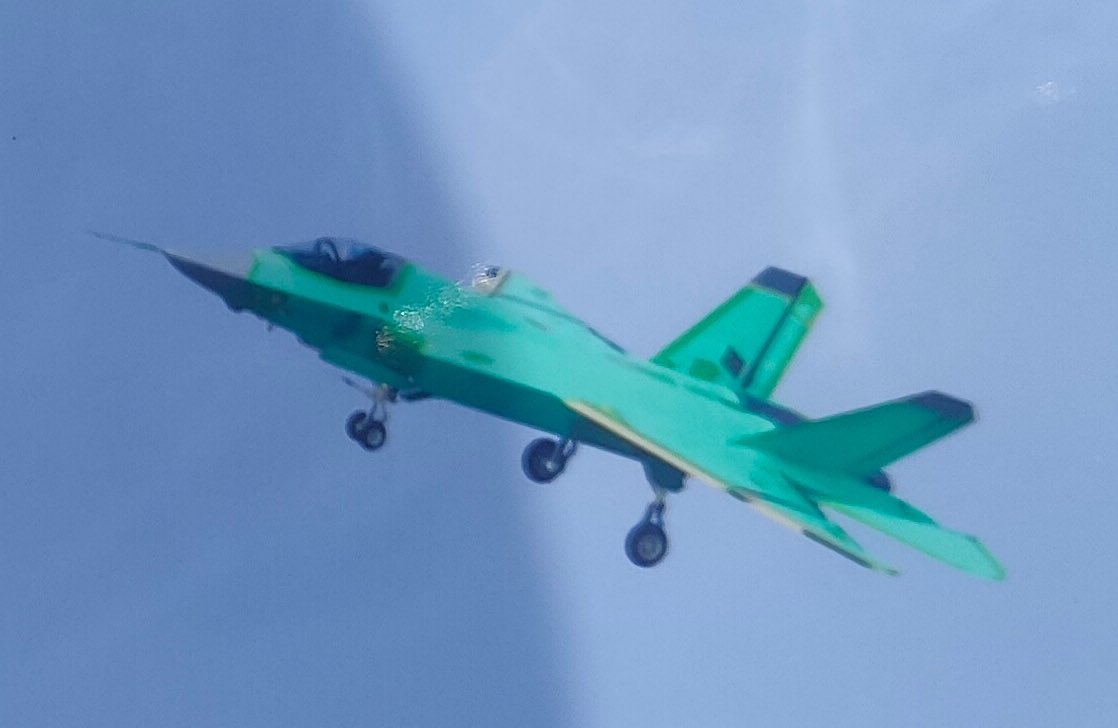 China has also produced the PL-15 missile, which is said to meet or exceed the range of even the most recent US AIM-120D BVR missiles. Meanwhile, Russia has had difficulty deploying adequate numbers of the R-77-1 missile.

RUSI reports suggest that Russia’s short-range R-73 heat-seeking missiles have a superior overall reputation, they lack an infrared imaging sensor that can differentiate aircraft from flare decoys, unlike its Chinese and US counterparts.

Engine technology is one area where China still needs to surpass Russia, Beijing continues to purchase Russian turbofan engines as it tries to develop local alternatives such as the WS-10B and, eventually, the powerful WS-15.

However, as EurAsian Times reported, China’s J-20 ‘Mighty Dragon’, was spotted with a domestically manufactured WS-10C engine at the Zhuhai airshow.

Jet engine technology was one area where China was lagging behind, but now that is almost taken care-off, as Beijing could eventually replace the Russian-made AL-31F turbofans with fully indigenous engines that only a few nations have been able to master.