China’s newest aircraft carrier would be ready for operation very soon if images circulating on social media are to be believed. They show a new catapult system assisting a Shenyang J-15, also known as ‘Flying Shark’, of the PLA Navy.

The Type 002 aircraft carrier (now known as the Type 003 after Shandong’s renaming), when commissioned, would be the first aircraft carrier in the Chinese navy having a CATOBAR (catapult-assisted take off but arrested recovery) configuration.

The catapult system aids the onboard fighter aircraft to be launched from the deck of an aircraft carrier, helping it to reach speeds to allow for better payload capacities. The present systems only rely on the aircraft’s own propulsion and have ramps on the bow to assist take-off/launch.

This would allow the J-15s — PLA Navy’s frontline carrier-based fighter jets — to carry more weapons and fuel. At present, the same was restricted due to the limited runway size of the Shandong and Liaoning. The aircraft is about 3 tons heavier than its American counterpart, the F-18 Hornet. Whether the system is a steam-operated one or an electromagnetic one (EMALS), is still unclear.

New photos doing the rounds on social media shows a new variant of the J-15, called the J-15T, sporting new catapult launch equipment. Currently, the aircraft is the only deck-based fighter in PLA service and would be joined by the FC-31 in the future, which is a stealth aircraft still in development, comparable in roles to the American F-35 Lightning II.

As of now, China has one fully-operational aircraft carrier named Liaoning (designated Type-001), which is a modified Soviet Kuznetsov-class aircraft cruiser. It also carries the Shenyang J-15 (26 of them), and various rotary-wing aircraft for utility roles. 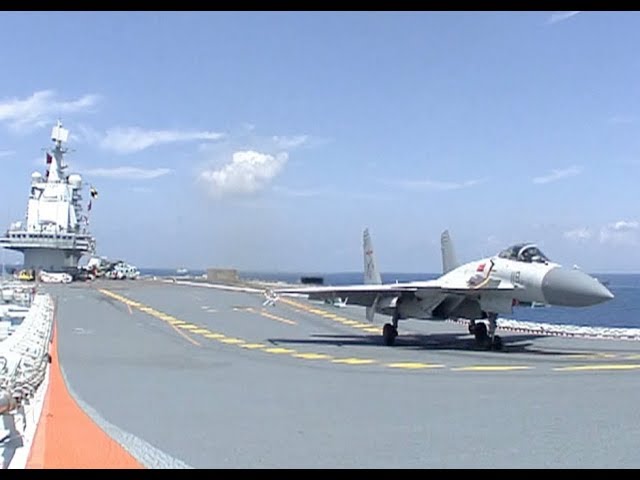 A second aircraft carrier, named Shandong (initially designated Type-001A and then Type-002 at the time of commissioning), has also been in service with the PLA Navy and was commissioned in December 2019 at the Hainan province by President Xi Jinping himself. Similar in characteristics to the Liaoning, it can carry 32 J-15 fighter jets, along with Z-18 and Z-9 helicopters for utility purposes. The carrier has been in trials since 2018.

Recently, it was reported that the carrier would attain its final operational clearance by the end of 2020. However, the third aircraft carrier (which has not been named yet) is designated as the Type-003 and is a completely different design from the former two.

It would be one of the only few aircraft carriers similar in size to the US Navy’s supercarriers and would sport catapult systems to assist its deck-based operations. It is estimated to be completed next year.

After the Type-003, Beijing is also planning for another Type-004 aircraft carrier which would be even bigger than the Type-003 and feature a nuclear propulsion system.