The Chinese PLA has achieved new operational capability with its latest fifth-generation fighter aircraft, the J-20 ‘Mighty Dragon’. Recently, the aircraft was spotted without a Luneberg lens at the Qingming Festival.

The aircraft flew in this new configuration on the occasion of the Qingming Festival on Sunday (April 4), paying tribute to their fallen comrades during the Korean War from 1950-1953.

One of the Chinese pilots, Sun Shenglu, was from the Wang Hai Air Group, a unit that is now operating the most advanced equipment in the Chinese arsenal.

The Wang Hai Air Group is affiliated with the PLA’s Eastern Theater Command. Sun Teng, a J-20 fighter pilot, told the Chinese state broadcaster CCTV that “[the] air force pilots in the new age will inherit the spirit of ‘aerial bayonet fighting,’ train to prepare for combat, be ready at all times for combat, and resolutely safeguard national sovereignty and dignity”.

The command announced in 2019 that the Wang Hai Air Group is equipped with the fifth-generation fighter jet. A video showed the Chinese pilots conducting aerial maneuvers in their latest airplane, and interestingly some of the frames showed that the J-20s were flying without their Luneberg lens onboard, experts analyzing the images told Global Times.

Even, the lines over the aircraft’s side missile bay appeared different from the previous J-20 models. 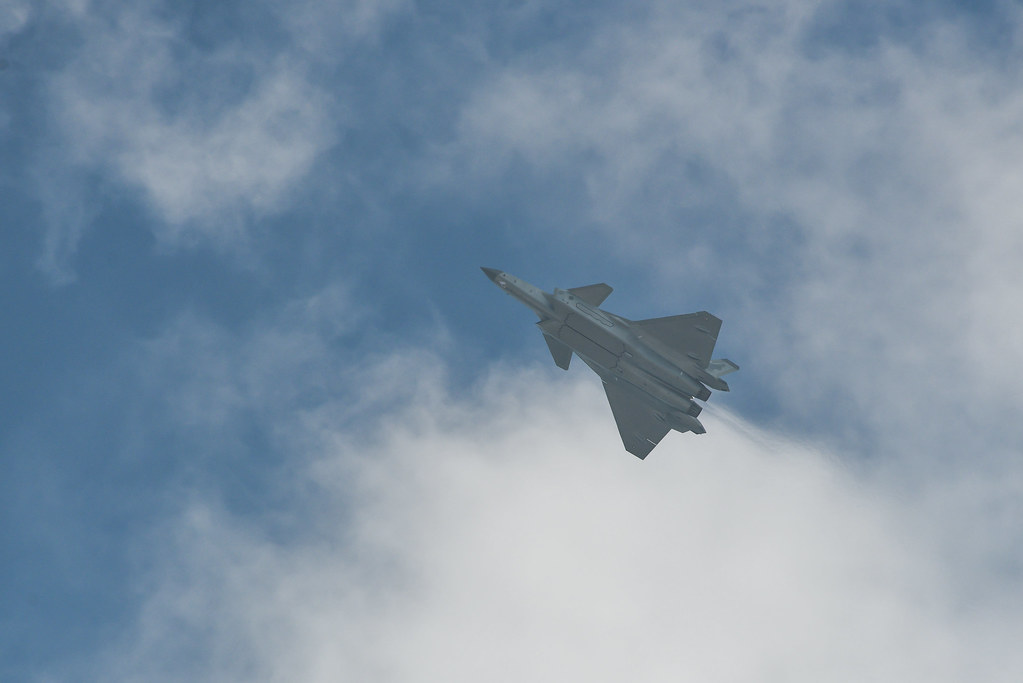 A Luneburg lens is a small device used to expand the radar cross-section of an aircraft, which means it can make a stealth aircraft visible to radar, the Chinese experts said.

According to the military observers, this is one of the rare occasions when the aircraft is spotted without the reflector attached. In most previous reports on the J-20, the stealth aircraft shown carried this radar reflector under its belly.

Radar reflectors are used during regular non-combat training to enable friendly radars to track the aircraft.

The J-20 ‘Mighty Dragon’ is one of the premier Chinese aircraft that took its first flight in 2011. It is a single-seat, twinjet, all-weather, stealth, fifth-generation fighter aircraft developed by China’s Chengdu Aerospace Corporation for the People’s Liberation Army Air Force (PLAAF).

The J-20 is designed as an air superiority fighter with precision strike capability and descends from the J-XX program started in the 1990s.

Inducted into service in 2017, it was the world’s third operational fifth-generation fighter after the American stealth duo — F-22 and the F-35. One important design feature of the J-20 is the high instability, which requires sustained pitch authority at a high angle of attack, in which a conventional tail-plane would lose effectiveness due to stalling.

The main weapon bay can carry short and long-range air-to-air missiles (AAM; PL-9, PL-12C/D & PL-15 – PL-21) while the two smaller lateral weapon bays behind the air inlets are intended for short-range AAMs (PL-10). These side bays allow closure of the bay doors prior to firing the missile, thus allowing the missile to be fired in the shortest time possible as well as enhancing stealth.

The J-20 is reported to lack an internal autocannon or rotary cannon, suggesting the aircraft is not intended to be used in short-range dogfight engagements with other aircraft but engage them with from long standoff ranges with missiles such as the PL-15 and PL-21. The aircraft also has four external hardpoints for mounting auxiliary fuel tanks to extend the ferry range.