Can Deep-Rooted Connection Between Kashmir and Central Asia Be Revived For Regional Development?

The train accident occurred at Walhar train station near Sadiqabad and rescue operations to retrieve survivors and bodies commenced immediately. All hospitals in Sadiqabad and Rahim Yar Khan were put on alert as victims and survivors were brought in large numbers.

The death toll is likely to rise as the condition of at least three to four passengers is said to be critical. TV footage from the site showed the heavily damaged train engine and carriages, as emergency workers and local people used metal-cutting tools and heavy cranes. 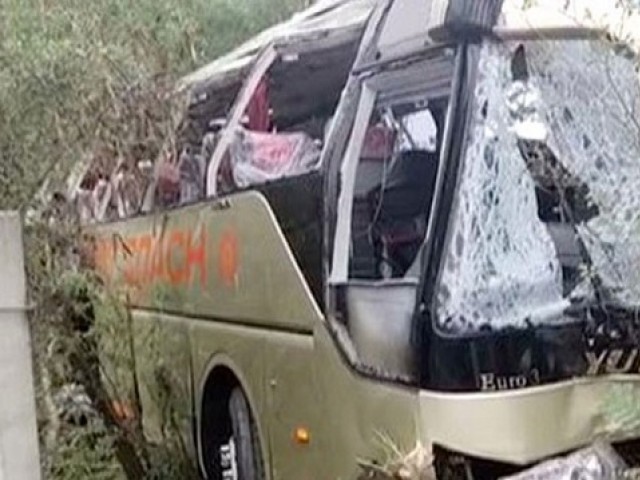 “It seems this caused by a delayed signal. At the moment we do not know how the passenger train ended up on the loop line,” said Rahim Yar Khan DPO Umer Salamat.

In another incident, 13 people were killed when the bus overturned which was en-route to Lahore from Swat. According to Radio Pakistan, the deceased and injured have been shifted to nearby hospitals.

Rash driving and the slippery road has made the interchange prone to accidents. Earlier, a truck collided with a gas pipeline in an effort to avoid a vehicle coming from the opposite direction in Hassan Abdal leaving six dead and several injured.

Once again, Pakistan has failed to place its rhetoric on Kashmir among its “key allies” after Saudi Arabia and Iran...

The French government has called for a crackdown on “radical Islam” following the beheading of a history teacher for showing...

Social media is abuzz with hailing Sanskrit as the “best language” for computers, citing a National Aeronautics and Space Administration...

Beijing’s ambitious Belt and Road Initiative (BRI) hailed by Pakistan and supported through the China-Pakistan-Economic-Corridor (CPEC) has reportedly hit a...

After vehemently criticizing China for its civil-military fusion model, Pentagon has now decided to follow China’s lead by awarding a...

Long before the dawn of modern aircraft like the F-35s, F-22 Raptors, the Nighthawk, and even the Blackbird, the United...