Nepal has protested the Indian inaugurating a vital link road connecting the Lipulekh pass along the border with China in Uttarakhand with Dharchula, asserting that this “unilateral act” is against the India-Nepal agreement. However, New Delhi outrightly rejected the claims. 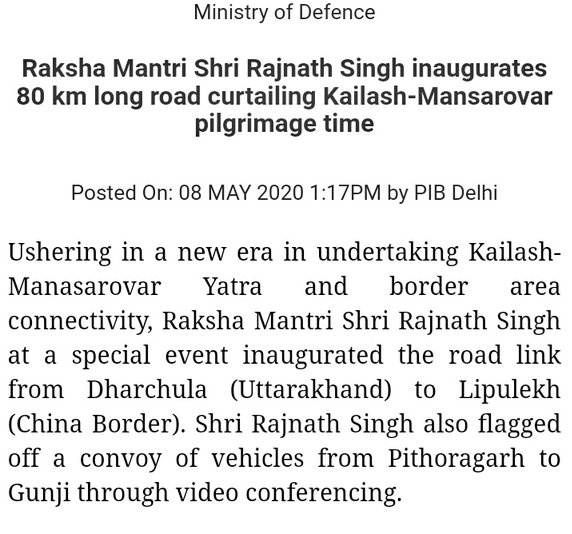 Earlier, Nepal’s Foreign Affairs Ministry in a statement said that Kathmandu was disappointment about the inauguration of the link road connecting to Lipulekh pass, which Nepal considers as its own region.

Recently, Indian Defence Minister Rajnath Singh inaugurated the road which is anticipated to assist pilgrims visiting Kailash-Mansarovar in Tibet as it is around 90 km from the Lipulekh pass.

The Kailash-Mansarovar yatra involves trekking at high altitudes of up to 19,500 feet, under inhospitable conditions, including extreme weather and rugged terrain.

Raising objection on the construction of the link road, Nepal’s Foreign Ministry said, “This unilateral act runs against the understanding reached between the two countries including at the level of the Prime Ministers that a solution to boundary issues would be sought through negotiation.” 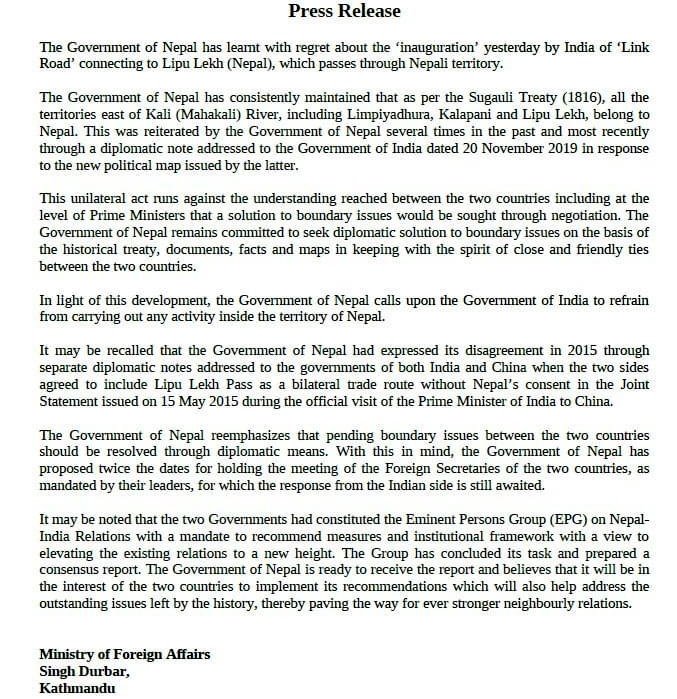 Lipulekh pass is a far western point near Kalapani, a contested area that lies Nepal and India. Both India and Nepal declare Kalapani as an indispensable part of their country – India as part of Uttarakhand’s Pithoragarh district and Nepal as part of Darchula district.

“The Government of Nepal has always asserted that as per the Sugauli Treaty (1816), all the areas east of Kali (Mahakali) River, including Limpiyadhura, Kalapani and Lipulekh, belong to Nepal,” the ministry said.

“This was reemphasised by Nepal numerous times and most lately via a diplomatic note addressed to New Delhi on November 20, 2019, in response to the new political map issued by India,” it said.

It said that Kathmandu had expressed its opposition in 2015 also through separate diplomatic notes directed to the governments of both India and China when the two sides consented to include Lipulekh pass as a bilateral trade route without Nepal’s permission in the Joint Statement issued on May 5, 2015, during the official visit of PM Modi to China.

“With this in mind, Nepal has proposed twice the dates for conducting a meeting of the Foreign Secretaries of the two nations, for which the acknowledgement from the Indian side is anticipated,” it said.

Kathmandu remains faithful of exploring diplomatic resolutions to boundary concerns on the basis of the historical agreement, records, data and maps in keeping with the spirit of close and cooperative ties between India and Nepal, the ministry said.

India, however, rejected Nepal’s objection against the construction of a road to Lipulekh on the border with China, saying the region is “completely within the territory of India” and both sides can resolve the boundary issues through dialogue.