The Royal Embassy of Saudi Arabia in Pakistan denied the information and fake news broadcasted by some media channels, claiming that the Kingdom of Saudi Arabia pressurised and threatened Pakistan to refrain from participating in the Kuala Lumpur Summit,” read the Saudi statement. 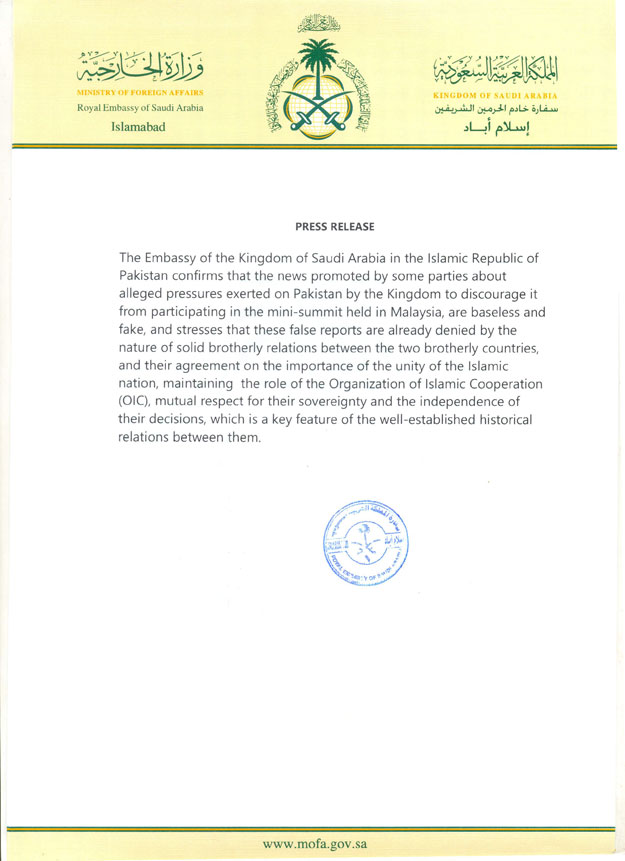 “The embassy affirms that the relations between the Kingdom of Saudi Arabia and [the] Islamic Republic of Pakistan are superior to the language of threat. The brotherly relations between the countries are long-standing and strategic based on trust, understanding and mutual respect, and the two countries enjoy a consensus of views on most regional and international issues, especially the issues of the Islamic nation.”

It added, “The embassy also confirms that Saudi Arabia has always stood with Pakistan in difficult times based on fraternal relations, and we strive always to stand with Pakistan to be a successful and stable country.”

A press release issued by the Saudi embassy stated, “The Embassy of the Kingdom of Saudi Arabia in the Islamic Republic of Pakistan confirms that the news promoted by some parties about alleged pressures exerted on Pakistan by the Kingdom to discourage it from participating in the mini-summit held in Malaysia are baseless and fake, and stresses that these false reports are already denied by the nature of solid brotherly relations between the two brotherly countries, and their agreement on the importance of the unity of the Islamic nation, maintaining the role of the Organisation of Islamic Cooperation (OIC), mutual respect for their sovereignty and the independence of their decisions, which is a key feature of the well-established historical relations between them.”

According to the reports Erdogan, while speaking to Turkish media representatives, said that it was not the first time that Saudi Arabia and the United Arab Emirates had put pressure on a country for doing or not doing certain things.

“Unfortunately, we see that Saudi Arabia pressures Pakistan. Now, there are promises that the country has given to Pakistan regarding the central bank. However, more than that, there are 4 million Pakistanis working in Saudi Arabia.

They (threaten by saying that they) would send (Pakistanis) back and re-employ Bangladeshis instead,” Erdogan was quoted as saying. He added that the kingdom has also threatened to withdraw money it had deposited in the State Bank of Pakistan.