The German Air Force has successfully conducted the first-ever flight tests of the ‘Meteor’ air-to-air missile from its Eurofighter Typhoon jet. India is among the nations that use the MBDA-made Meteor missile.

A video of these tests, which were conducted in June, was shared by the German Air Force Times on August 2. The service, called Luftwaffe, is yet to conduct live-fire drills of the missile, which may be held later this year.

The initial tests of the Meteor were successfully conducted by the Luftwaffe’s Tactical Air Wing 74 from the aircraft which was operating out of Neuberg Air Base in Bavaria.

According to reports, two Eurofighter jets were involved in the drills and the data obtained would be used for determining the performance of aircraft.

The Meteor is the next generation of Beyond Visual Range Air-to-Air Missile (BVRAAM) system designed to revolutionize air-to-air combat in the 21st century. The weapon brings together NATO member nations Germany, France, Spain, Italy and the United Kingdom, as well as NATO partner nation, which is not an actual alliance member, Sweden. 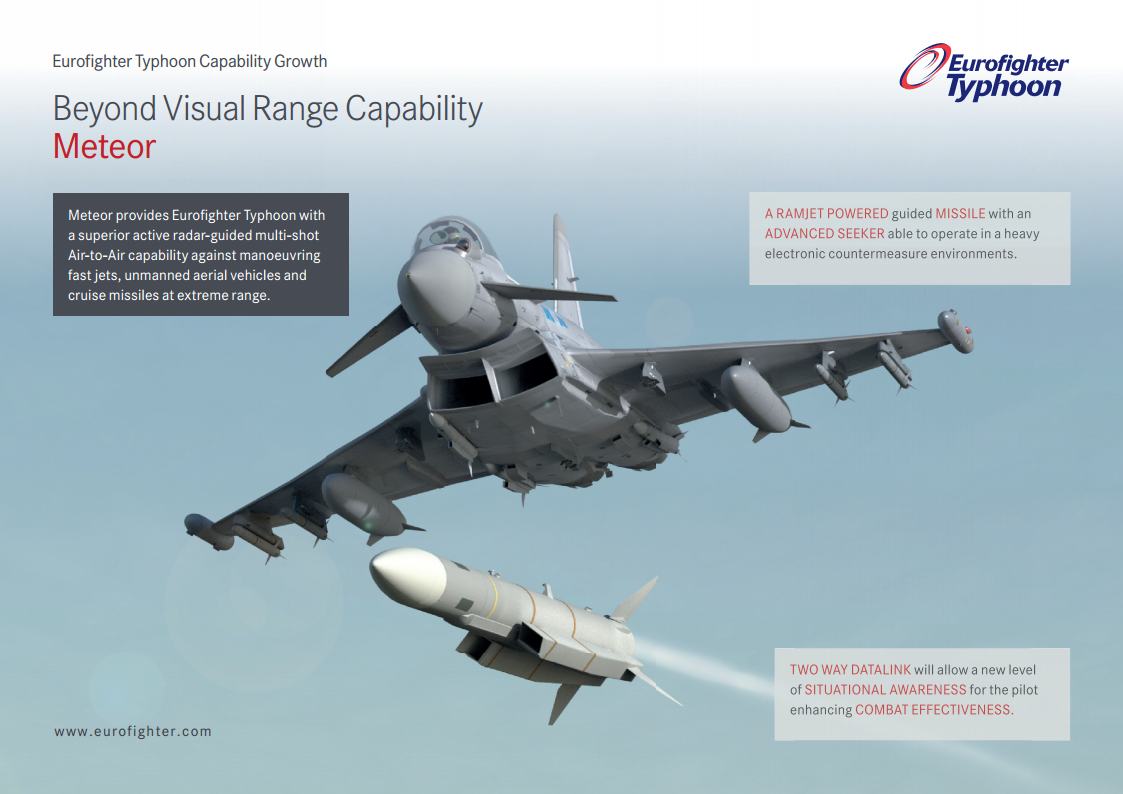 It is designed to meet the most stringent of requirements and is capable of operating in the most severe of clutter and countermeasure environments. The weapon is also equipped with data link communication.

Aimed at meeting the needs of a network-centric environment, the missile can be operated using third-party data, enabling the Meteor user – the pilot – to have the most flexible weapon system. It has a length of 12 feet and weighs just under four hundred pounds.

It also features a ramjet air-breathing engine, allowing it to modify its velocity according to its target’s maneuvers, The National Interest reported.

A German pilot said the Luftwaffe will incorporate four Meteor missile systems which will be tested along with the AIM-120 advanced medium-range air-to-air missiles and Infra-Red Imaging System-Tail short-range missiles, which are already in service with the military.

Why An ‘Inferior’ SAAB Gripen Jet Could Beat US’ Most Powerful Fighter Aircraft For Indian Air Force Tender?

It was reported that the flights were crucial for the Luftwaffe to study as well as determine the effects that the Meteor has on the fuel consumption and the flight behavior of the Eurofighter Typhoon, Defense News reported.

“Imagine you are driving your car with a roof rack attached. You will first notice that the air resistance increases and with it the consumption of your car,” the unnamed pilot said in a statement provided by the service.

“And we calculated exactly such consumption values in advance in simulations with our mission planning software and checked them with the flight tests.” The Meteor will be integrated with all of Germany’s Eurofighter Typhoon aircraft, except for the oldest Tranche-1 models, according to Defense News.

India’s newly acquired Rafale jets carry Meteor, SCALP or storm shadow cruise missiles and the Hammer precision-guided ammunition. The Meteor is expected to outclass all other systems in the region, including the AMRAAM missiles in service with Pakistani F 16 fighter jets.