While all eyes were glued on to the potential mega-deal involving the sale of the 50 advanced US F-35 stealth jets to the UAE in a whopping $23 billion deal, European aerospace giant Airbus is aggressively pitching its Eurofighters Typhoons across Europe.

Why SAAB Gripen Jets Have ‘Wreaked Havoc’ On Both F-16s & Rafales In Global Arms Market?

The world-renowned aircraft manufacturer, which has its headquarters in Leiden, Netherlands, is giving stiff competition to the likes of Lockheed Martin and French Dassault Aviation, who themselves have been in the limelight for exporting their advanced fighters, globally.

At the back of the Airbus rolling out a deal to supply 38 new Eurofighters to Germany in a deal worth $ 6.5 billion, the aircraft manufacturers are now looking to conclude a similar deal for Switzerland and Finland.

Why US Army That Stands One Step Away From War With China Is Training With The Chinese PLA?

Following the budget approved by the German Parliament, the Bundestag last week, the German Air Force who are called Luftwaffe are set to acquire 30 single-seater and 8 twin-seater Eurofighters as they look to upgrade their aging fleet of combat aircraft. 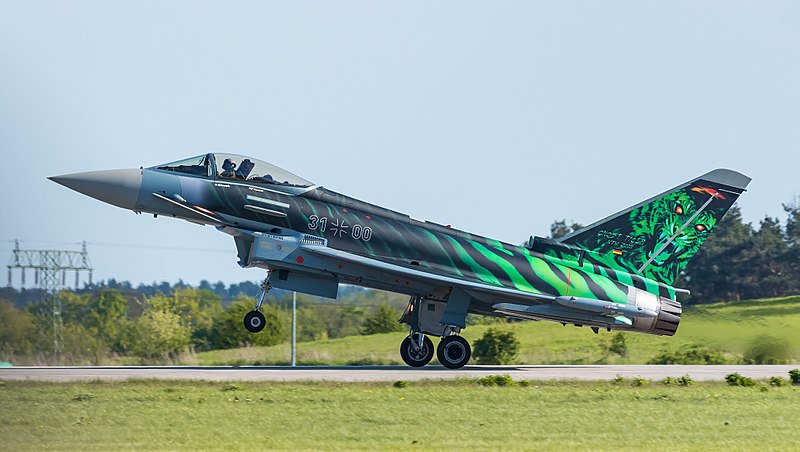 Germany is likely to utilize four of those aircraft as testbeds for future technology, with the Eurofighters considered a bridge to the next-generation Future Combat Air System, which will be a German-French-Spanish collaboration.

According to a statement issued by Airbus –

“The renewed order from Germany secures production until 2030 and comes at a strategically important time for the program,”

In addition to an expected Eurofighter order from Spain to replace its legacy F-18s, procurement decisions in Switzerland and Finland are imminent in 2021.”

The Eurofighters are in contention with Switzerland, with the Central European nation looking to secure around 40 fighters for a maximum of $6.5 billion, while Finland is also looking to replace its F-18 fleet.

While referring to the name of the new tranche of aircraft, number 4, Airbus officials in a short statement, said – “The variant offered in Switzerland corresponds to the configuration of the German Quadriga order.”

Originally designed as an air superiority fighter, the Eurofighter Typhoon is a twin-engine, canard delta wing, multirole fighter jet falling under the 4++ generation bracket. The fighters are manufactured by a consortium of Airbus, BAE Systems, and Leonardo.

The Eurofighter Typhoons have come head-to-head against their French counterparts, the Dassault Rafales, with almost a similar set of features.

The two fighters were running for a huge Indian contract not so long ago alongside the US F-16s, Boeing’s F/A-18 Hornets, Russia’s MiG-35, and Sweden’s Saab’s Gripen, however the Typhoons despite being shortlisted, lost out to Rafales after New Delhi opted to buy 36 of the French fighters for the Indian Air Force.

After Shooting-Down Over 250 Russian Aircraft, US To Replace Its Most Dangerous Man Portable Missiles

However, they have yet another chance to redeem themselves against rivals Rafales and could finally end up doing that with voters in Switzerland approving a new air-defense package in September, which includes a ground-based weapon system and a fleet of combat aircraft.

Apart from the Typhoons and Rafales, other fighters running for the contract are Boeing’s F-18 Super Hornet and the US F-35s. While Rafales have been acquired by Egypt, Greece, and India in recent years, the Typhoons are still considered to have a bigger market.

Why India Keeps Renting Nuclear Submarines From Russia Worth Billions Of Dollars Instead Of Buying One?

Up to last year, over 550 Typhoon jets had been sold to Germany, the United Kingdom, Italy, Spain, Austria, Oman, and Saudi Arabia, as compared to the orders for Rafales which included 36 for India, 36 for Qatar, 24 for Egypt and 180 out of a planned 286 for the French Air Force itself.