Having had a rich history in defense aviation, the United States Air Force is currently equipped with the finest of aircraft developed by the aerospace heavyweights Lockheed Martin, Northrop Grumman, Boeing, and General Dynamics, with all of them fielding years of technological intelligence gained from repeatedly pushing the bar they set.

However, it is one fighter jet in particular which has had everyone across the world in absolute awe of them—a fighter jet that despite being plagued with issues from the start has time and again proved just why they are considered the most advanced fighters on the face of the planet due to their air superiority and state-of-the-art features— the F-35 fighter jets.

Now, as a potential deal to sell the the fifth-generation lethal F-35s to the United Arab Emirates (UAE) moves forward and Qatar set to acquire the Boeing F-15 jets (F-15QA), we look back in time when both the jets were pitted against each other.

In 2016, the F-35 stealthy fighter jets took part in an exercise against the heavy-weight F-15 Eagles (often considered the bodyguards of the F-35s) and had a stunning kill rate of 8 without suffering a single loss.

The simulated environment was set from the Hill Air Force Base in Utah to Mountain Home Air Force Base in Idaho, under which seven F-35s participated in operational tests against local-based 4th Generation F-15E Strike Eagles belonging to the 366th Fighter Wing.

“However, the “zero losses” may simply mean that the F-35s were able to complete their assigned strikes without being shot down by the aggressors of the Red Air: considered that the F-15Es were probably equipped with the AN/APG-82 AESA radar and the Sniper ATP (Advanced Targeting Pod), the fact that the Strike Eagles performing DCA (Defensive Counter Air) were not able to “find” and/or “engage” the almost-IOC F-35s can be considered a huge achievement for the pricey, troubled 5th generation multirole combat plane.”

Fearing A Winter War, India Keen For A Quick Disengagement With China From Ladakh – Beijing Experts

Lockheed Martin’s F-35 fighters are considered the most sought after fighter jets in the world and along with their stealth brother F-22 Raptors, lead the line for US Air Force. While the F-22 Raptors are banned for sale to any foreign government, many countries have expressed interest in buying the fighters due to their unique set of features.

The fighters use advanced stealth with unparalleled speed and agility, fully fused sensor information, network-enabled operations, and advanced sustainment to provide supreme capabilities in the air. 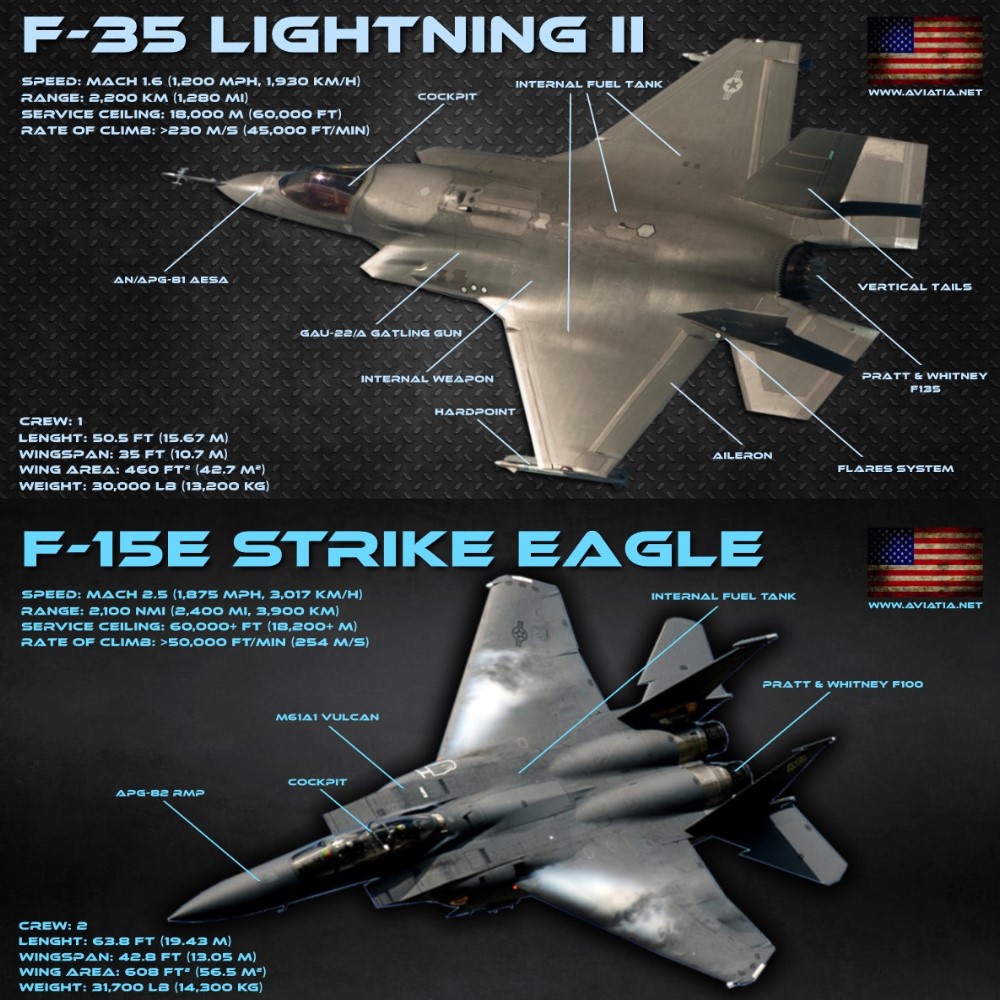 On the other hand, the F-15 Eagles built by the McDonnell Douglas and Boeing alliance, are heavyweight fighter jets, which are considered the absolute top dogs in dogfighting and with their massive weapons load and huge stature are suited for a different set of roles as compared to the F-35s.

One of the prominent areas where the two fighters are significantly different is in carrying out deep penetrating strikes.

With countries like Russia and China relying on their powerful radars and SAMs like the S-400s to detect targets and shoot missiles from over 100 miles away at conventional fighters like the F-15 Eagles, the F-35s are the fighters which can potentially beat these traps.

Defense Writer Sébastien Roblin, while writing for the National Interest, says, “By comparison, because a stealth aircraft’s reduced radar cross-section means they will only become vulnerable to targeting radars at short range, they can more easily infiltrate between the “bubbles” of enemy air defense radars and employ cheaper, shorter-range guided weapons. That means the F-35s can more freely operate over enemy airspace on “Day One” of a conflict.”

Moreover, possibly if both fighters are deployed in a combat mission that involves fighting against the Taliban or ISIS, stealth is not really a key requirement with the need of the hour being the ability to loiter over combat zones and launch heavy fire.

The F-15s fit the bill for such a mission as they are able to carry out a heavier ground-attack payload underwing.

However, despite that the F-35s with their networked sensor suite could be better suited for a mission of that nature, as they would be able to locate enemy positions as well as share such intelligence with allies.

The F-15s stand superior to the F-35s in the weapons load capacity with the Eagles boasting of about twenty missiles against the stealth fighter’s total of six, which enables them to intercept bombers faster and launch missiles at them.

However, that is where the stealth feature of the F-35s gives them an added advantage as the planes can go undetected on enemy bomber’s radar and launch surprise attacks, thereby having a higher possibility of shooting them down before they flee.

Despite both sets of fighters fulfilling different requirements set by the US Air Force, the bottomline is that they can work well together because of the fact that they bring different options with them. Speaking about the integration of the two fighters during the simulation, Colonel Chace said,

“The feedback from unit operators in place today has been very positive for the F-35, not just concerning performance but the ability the aircraft has with other platforms. In particular, at Hill, integration with the F-15E (Strike Eagle) has gone very well. We’ve also been demonstrating the ability to put bombs on target. All of that information will be provided to us in the formal IOC readiness assessments.”

Previous articleEurofighters Typhoons Outflank Rafales, F-35 Stealth Jets For Lucrative Deals Across Europe
Next articleThe US Army’s M4 Rifles Will No Longer Have ACOGs or Aim-Points

USAF Gets High-Powered Laser Weapon On Its Ghostrider Aircraft; Says Can ‘Knock Out’ Enemy Defenses In A Jiffy