The F-35 Joint Strike Fighter, being used by the US and its allies, is the most ambitious and costliest weapons project in the world so far.

This program was initiated to replace older and a wide variety of in-service combat aircraft such as fighter jets, ground attack craft, and reconnaissance platforms for the nations involved in the project.

Lockheed Martin’s X-35 had won out the competition against Boeing’s X-32, which was its main competitor. The X-35 eventually became the F-35 Lightning II that would eventually replace various aircraft such as the American F-16, A-10, F/A-18A-D, AV-8B, and British Harrier GR7, GR9s, and Tornado GR4.

The projected average annual cost of this program is $12.5 billion with an estimated program life-cycle cost of $1.1 trillion, making it the costliest defense program ever.

To understand the differences, let’s first look at the three main types of take-off mechanisms used in combat aircraft.

CTOL (Conventional Take-off and Landing): This is the most recognizable and widely used mode. In this mode, a fighter jet uses traditional long runways to take off and land, much like commercial aircraft do.

This is hassle-free, allowing the aircraft to take off with full fuel and weapons load. Used mostly on land-based runways, this mode is suitable for Air Forces. Other methods (mentioned here) are generally used for Naval Aviation.

V/STOL (Vertical and/or Short Take-Off and Landing): This is the most sophisticated way of taking off and landing, where the aircraft is fitted with special design features allowing it to take off and land vertically; like a helicopter.

This requires a lot of engine power to keep such a heavy aircraft in a stable vertical hover and has to give up some of the features like payload and fuel capacity. However, this is particularly beneficial for places with very short or no runways, like smaller aircraft carriers.

Carrier-Based: Taking off from carriers depends on what equipment does the vessel provides. Based on this, some aircraft carriers might be equipped with more modern catapults, which literally pull the aircraft and launch it like a slingshot into the air (CATOBAR: Catapult Assisted Take-Off But Arrested Recovery). France and the US use this operation on their aircraft carriers.

Some less-costlier aircraft carriers have ramps, or ‘ski jumps’ to assist in taking off. This is called STOBAR (Short Take-Off But Arrested Recovery, in which the aircraft launch using a ski-jump to assist their take-off.

Generally, conventional warplanes are launched with STOBAR, which can also work for air force variants. These aircraft are equipped with a unique landing hook that entangles arrestor wires on the deck to land.

The STOBAR system is simpler to build than CATOBAR. As of 2018, it has been used regularly on Russian, Indian, and Chinese carriers.

The F-35A is the conventional take-off and landing variant intended to be used by the US Air Force and has been adapted to many nations’ requirements, most notably the Israeli F-35I ‘Adir’.

It is the smallest of the three variants and is capable of tolerating more g force than the other two. 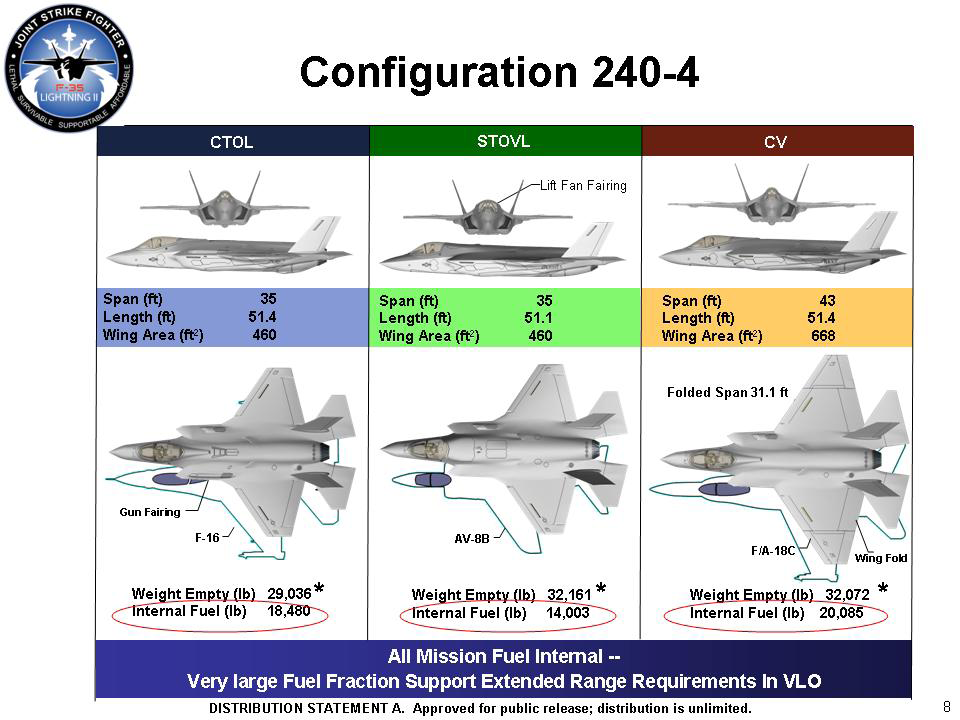 This is perhaps the most exciting variant of the F-35 Lightning II, which can hover mid-air and even take off and land vertically like a helicopter.

Yes, it’s the V/STOL variant and in order to provide this capability, an additional Shaft Driven Lift Fan is added to the fuselage behind the cockpit, to generate lift.

However, to accommodate this fan, the B variant sacrifices about a third of A’s fuel volume, greatly reducing its range and is limited to only 7g.

It is designed for CATOBAR operations from aircraft carriers.

Compared to the F-35A, the F-35C features larger wings with foldable wingtip sections, larger control surfaces for improved low-speed control, stronger landing gear for the stresses of carrier arrested landings, a twin-wheel nose gear, and a stronger tailhook for use with carrier arrestor cables.

The larger wing area allows for decreased landing speed while increasing both range and payload. The F-35C is limited to 7.5 g.

However, while sacrificing some fuel or payload requirements for different models, all the variants come equipped with the same advanced digital avionics and sensor suite, superior to any other aircraft currently in operation.