With over 21 million followers on Twitter, the White House only follows 19 people a list dominated by Indians and Americans. The power center of the world’s economy has a strict following list & guidelines and Indian PM Narendra Modi has made it into the elite list.

The others among the select 19 who are followed by the White House include – Vice President Mike Pence, Donald Trump, POTUS, First Lady Melania Trump, and others. 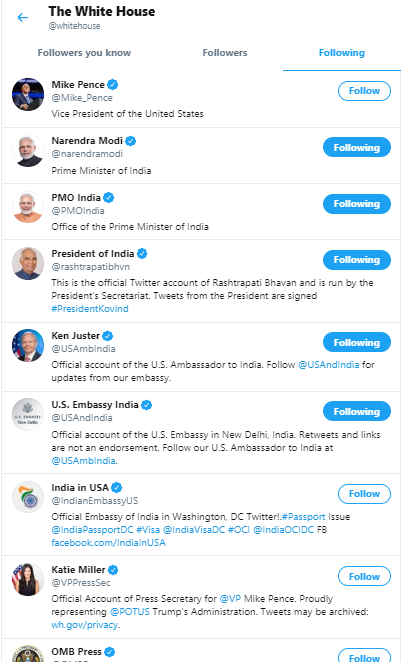 Over the years, President Trump and PM Modi have engaged in several bilateral meetings and have jointly addressed two massive informal events in the United States and India – Howdy Modi and Namaste Trump.

Earlier, In a press briefing at the White House, Donald Trump said he would be “surprised if he (Prime Minister Modi) would” stand firm over his ban on the export of an anti-malarial drug, hydroxychloroquine, which is being used to treat COVID-19 patients.

“I didn’t hear it was his decision. I know that he stopped it for other countries (but) I spoke to him yesterday and we had a very good talk… I said we’d appreciate you allowing our supply to come out.

If he doesn’t allow it to come… there may be retaliation,” Trump said, referring to his Sunday phone call with PM Modi.

Hours later, India lifted the ban on these drugs which was welcomed by Trump.

“I bought millions of doses… more than 29 million. I spoke to Prime Minister (Narendra) Modi, a lot of it comes out of India. I asked him if he would release it. He was great. He was really good,” Donald Trump told American channel Fox News.

Trump also tweeted, “Extraordinary times require even closer cooperation between friends. Thank you, India and the Indian people for the decision on HCQ. Will not be forgotten!”, it has raised speculation on the relationship between the two countries.

“Thank you, Prime Minister, Narendra Modi for your strong leadership in helping not just India, but humanity, in this fight!” Trump said in a tweet that soon went viral.

Indian Americans have welcomed the decision.  “President Trump is a graceful and grateful man. He is honest when he says that he will not forget India’s gesture. He is a true friend of India,” said Al Mason, a Donald Trump supporter.

“Thank you President Trump. I think you are well orchestrating the compulsion of history and demand of destiny that we and India be the best of friends, joined at the hip and yet as family, free hearts and minds to love across a spectrum of emotions, but always together,” tweeted Indian American attorney Ravi Batra.

US Anti-Tank Missiles Are ‘Struggling To Fire’ In Ukraine; Leaked Documents Reveal A Poor Hit-To-Miss Ratio