FATA, Balochistan Remain The Most Volatile Parts of Pakistan; Administered-Kashmir The Safest

FATA and Balochistan remain the hot-beds of insurgency while Islamabad and Pakistan-administered Kashmir (PaK) remain the most peaceful regions in the country. A decline of 21% in terrorist incidents were witnessed in 2018 compared to 2017.

The report states the law and order situation was satisfactory in Punjab and Sindh while Islamabad, PaK and Gilgit-Baltistan remained peaceful.

The report reveals that 517 people were killed in terrorist incidents in 2018 of which 288 were from Balochistan.

“Sindh witnessed a decline of 80 per cent in terrorist incidents in 2018 as compared to 2017 while Punjab and Islamabad saw a 50 per cent,” it added.

Another 67% decline in terrorism-related incidents occurred in PaK, said the report, adding that 138 people died in erstwhile Fata and 59 in K-P in terrorist incidents while the death toll of such incidents was 15 in Punjab, 10 in Sindh, five in Gilgit-Baltistan and one each in PaK and Islamabad. 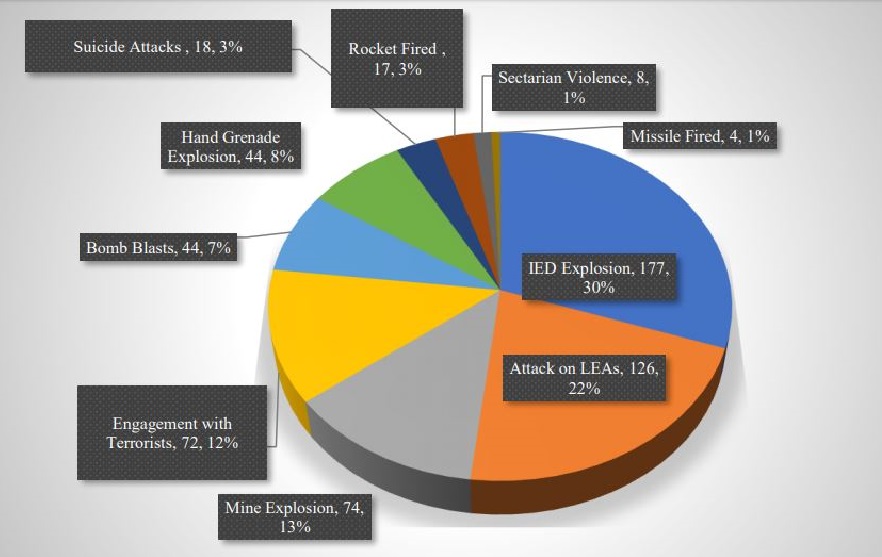 The NACTA report states that the month of July 2018 was the worst in 2018 during which 221 lives were lost in terrorist incidents.

The highest number of terrorist incidents from 2001 to 2018 occurred in 2010 when 2,061 terrorism-related incidents took place. 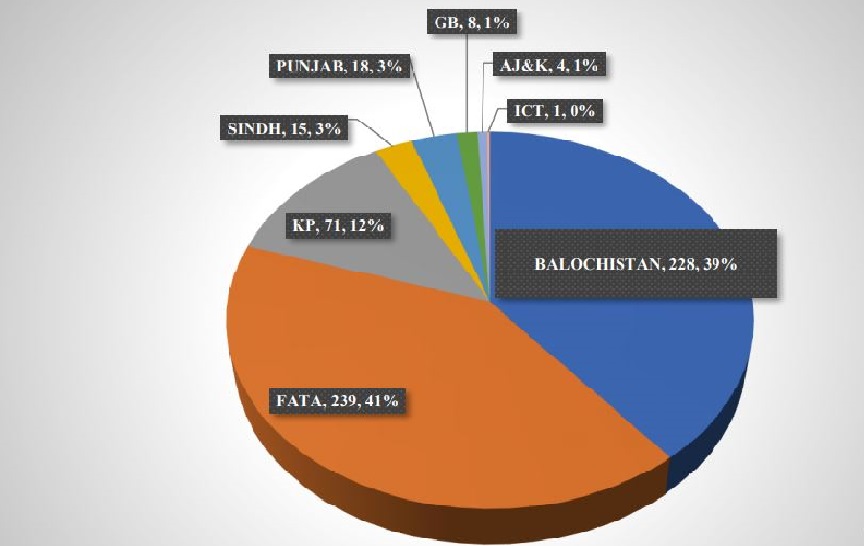 On July 15, 2018, over 150 people were martyred and 160 injured in a suicide attack on an election campaign of the ruling Balochistan Awami Party. Nawab Siraj Raisani, the younger brother of former chief minister Nawab Aslam Raisani along with nine children, embraced martyrdom in the attack. He was running the campaign.

In 2017, 72 lives were lost in the suicide blast at Lal Shahbaz Qalandar’s shrine. In 2016, at least 70 people were killed when a suicide bomber targeted the emergency services of a hospital in Quetta after a lawyer’s killing.

The death toll of the Wagah Border blast in 2014 was 61 when a suicide bomber exploded himself at the Pakistan-India border crossing. The deadliest was the 2007 Karsaz attack, in which over 160 people were killed when former prime minister Benazir Bhutto’s convoy was targeted by terrorists in Karachi.

Must Read at EurAsian Times