The Chinese Navy aspires to have a fleet of 5-6 aircraft carriers by 2030s, the second largest in the world. Be it the jealousy of the US Carriers or the ambitions to increase its footprint in the Pacific and Indian oceans – the People’s Liberation Army Navy surely wants to challenge the global US dominance.

With the construction of new Aircraft Carriers, the PRC is also looking forward to the indigenous development of carrier-based aircraft. Currently, the PLA Navy operates the Shenyang J-15 as its primary offensive carrier-based fighter- which is a copy of the Russian Su-33.

However, the J-15 is believed to be unable to take-off from its carriers with full fuel and ammunition payload, along with controversies over its technical problems: restricting its abilities as a credible deck-based fighter aircraft. The fighter cannot take off from the carrier’s ski-jump if the payload exceeds 12 tonnes.

The PLA-Navy is also developing its offensive electronic warfare and early warning planes, much like the American E/A-18 G ‘Growler’ and the E-2C ‘Hawkeye’. 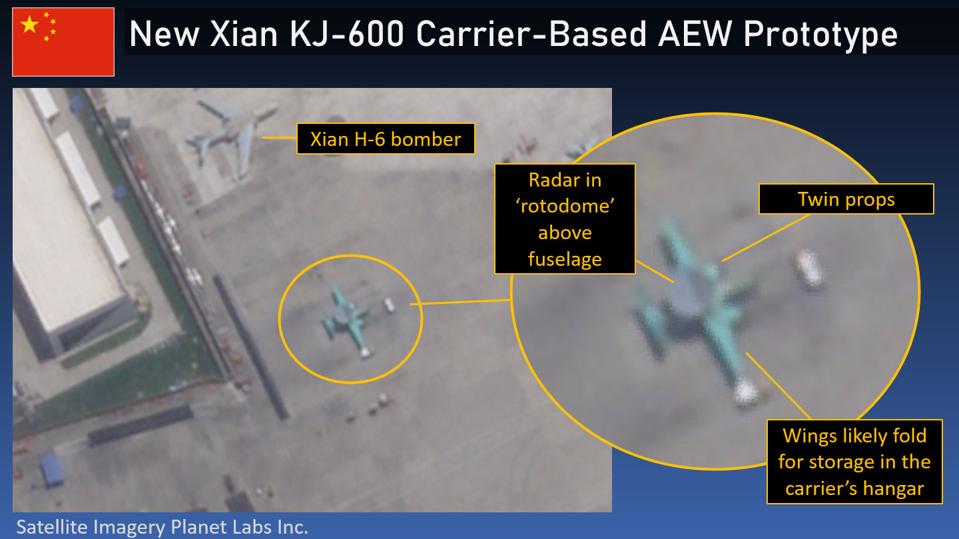 The radar is carried in a large rotodome atop the fuselage. Lastly, the tail is split into several smaller vertical stabilizers, like bombers of World War II.

According to H I Sutton writing for Forbes, the layout of the two planes are virtually identical, to the point that aircraft recognition may prove a challenge in the future. The Hawkeye is a well-proven design that first flew 60 years ago, and is still in service aboard U.S. and French aircraft carriers.

The prototype KJ-600 has been spotted in satellite imagery of Xi’an Aircraft Industrial Corporation’s airfield at Xian-Yanliang in central China, a place where many prototype aircraft are seen.

However, the aircraft’s performance as a deck-based plane is questionable, as U.S. carriers use CATOBAR (Catapult Assisted Take-Off But Arrested Recovery) configuration which allows for its launch- also having a bigger runway.

While Chinese carriers currently do not use CATOBAR, the future Type-003 aircraft carrier will have catapult systems.

While it is not yet known that the radar mounted on the KJ-600 actually rotates or not, nevertheless, the development of an indigenous naval carrier-based early warning aircraft is a big plus for the People’s Liberation Army Navy’s future ventures into the disputed seas its coasts are surrounded with and provides a much-needed boost for the naval air fleet.

Previous article
Israel Refuses To Sell AWACS To China But Pushes For A Billion-Dollar Deal With India?
Next article
Turkey Celebrates Battle of Dumlupinar; Victory Day Over Arch-Foes Greece