The bilateral relations between France and Pakistan were severely strained after Prime Minister Imran Khan accused President Emmanuel Macron of “attacking Islam” by encouraging the display of Prophet Muhammad’s cartoons.

The war of words between the leaders of the two countries followed after the beheading of the French school teacher Samuel Paty by a Muslim fundamentalist, sparking a wave of protests in several parts of the Muslim world.

Macron stood his ground on protecting the freedom, in line with French ideals of secularism, unaffected by the worldwide criticism from the Muslim nations.

The Indian media falsely reported about France​​ revoking the visas of 183 Pakistanis living in the country and did not “bow down to pressure” imposed by Islamic nations. The fake news was widely reported by Indian news organizations, including prominent platforms such as ANI, DNA, Zee News, and News18 on 1 November.

It all started with a series of tweets from an imposter account of the Pakistan Consulate in France with the name ‘Consulate General of Pakistan France’.

The account has a mere 469 followers, none among them Pakistani government institutions or officials, which clearly indicates the account is fake. Even a little research into the topic would have revealed the truth, and most media groups hardly care about ethics and honesty.

The tweet added that the “Consulate General Of Pakistan France has requested the French authorities to allow a temporary stay of Lt General Ahmad Shuja Pasha’s sister, who is in the country to see her ailing mother-in-law”.

Pasha is a former chief of Pakistan’s intelligence agency ISI.

Yahoo News picked up the report from ANI and published it the same day without verifying it.

India’s DNA newspaper also carried the report, saying, “This action of the Macron government is directly linked to the anti-French rhetoric of Imran Khan.” The fake news piece is still undeleted on their website as we speak. 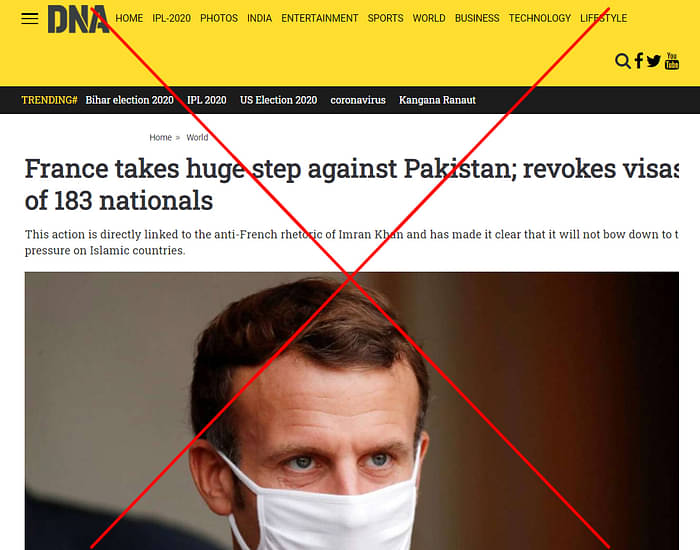 India’s biggest newspaper, The Times of India, carried the story in its blog post.

The Embassy of Pakistan in Paris, France has only one Twitter account @PakInFrance. Any other account claiming to represent the Embassy anywhere in France is fake & misleading & may be reported to @Twitter.@FakeNews_Buster @ForeignOfficePk @MoIB_Official pic.twitter.com/35y7NhXBkh

The Pakistan media has also been countering the misinformation from the Indian side, with many news organizations debunking the news.

Pakistan’s relations with France have been on the edge ever since Imran Khan tweeted his condemnation of Macron’s policies on Islamic extremism in the country. Hundreds of thousands in Pakistan took to the streets demanding a ban on French products, with police having to tear-gas and disperse angry protesters who tried to march toward the French Embassy in Islamabad.

The crowd demanded the expulsion of the French ambassador and the end of all ties with France and called for the boycott of French products.

The Islamic country’s National Assembly even asked the government to recall its ambassador in France, however, it turned out the country had no ambassador posted in Paris at present.

It was brought to their notice that the last ambassador Moin-ul-Haq had been recently transferred to China and Pakistan had yet not designated an ambassador to France.

The European country is reportedly exporting products worth $45.8 billion to the Islamic countries (2019 figures), while the import bill stood at $58 billion. France has been a military weapons supplier to Pakistan in the past and was reportedly involved in new deals.

However, with much of the rich Arab world aligned with the West today, the push for a ban is hardly going to make a dent in France’s businesses. Although the French President appeared to soften his stance after initial adamancy over his stand to uphold freedom of expression in his country, saying he ‘understood’ the anger in the Islamic world.

Previous articleWatch The Russian ‘Sea Monster’ That Remains The Biggest Threat To American Super Carriers
Next articleTop Indian Politician Writes Obituary of India-Russia Friendship; Advocates For Joining The US Camp