A senior  White House official of Indian-origin travelled to Syria earlier this year to hold secret talks with the Bashar al-Assad regime in a bid to secure the release of American hostages there, according to a reports.

Citing officials from President Donald Trump’s administration and others familiar with the negotiations, The Wall Street Journal reported that Kash Patel, a deputy assistant to Trump and the top White House counterterrorism official, met with officials from Assad’s government. The identities of the officials remain unknown.

Kashyap “Kash” Patel, an Indian American official in President Donald Trump’s National Security Council, was also at the center of a controversy for his alleged involvement in the Ukraine scandal. Patel’s was allegedly involved in Trump’s reported plan to withhold $400 million in military aid to Ukraine to pressure the new Ukrainian president to investigate former Vice President Joe Biden. 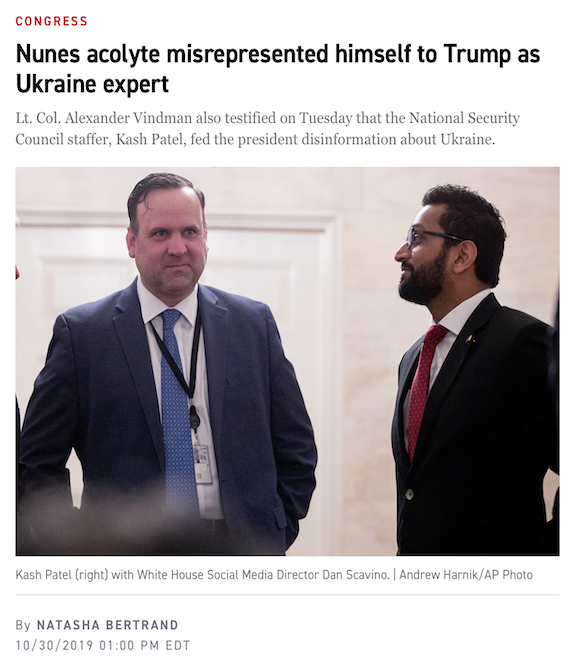 The last known talks between White House and Syrian officials in Damascus took place in 2010, said the report, adding the US cut off relations with Syria in 2012 to protest Assad’s crackdown on protesters calling for an end to his regime.

According to the report, American officials are seeking a deal to free Austin Tice, an American journalist who went missing while covering the war there in 2012, and Majd Kamalmaz, a Syrian-American therapist believed to have been taken by Syrian forces after being stopped at a checkpoint in Damascus in 2017.

“This administration is committed to our dad’s case, and we continue to speak with officials at the highest levels of the US government to bring dad home,” he told the newspaper.