How Did Pakistan Respond To The Ayodhya Verdict?

The Indian Supreme Court’s verdict on the temple and mosque dispute in Ayodhya is being actively followed and discussed in Pakistan. Babri Masjid hashtag is trending top on Twitter in Pakistan followed by the Ayodhya Verdict.

On Saturday, a five-judge bench headed by Justice Ranjan Gogoi, the Chief Justice of the Supreme Court of India, unanimously announced the decision on the disputed land in the favour of Hindu’s and provided the Muslim side with five-acre land for the construction of a mosque.

There is a steady and balanced response from all sides in India on this decision, but there has been an aggressive response from Pakistan.

World has yet again seen true ugly face of extremist India. Today through verdict on Babri Mosque after illegal action for paper status of IOJ&K on 5 Aug 19.
On the other hand Pakistan today respecting other religion has opened #KartarpurCorridor for Nanak Seweks.#UglyIndia

Pakistani Army spokesman Asif Ghafur tweeted, “The world has once again seen the real face of extremist India.” India ended the constitutional status of Kashmir on August 5 and today the Babri Masjid case was decided. On the other hand, respecting other religions, Pakistan opened the Kartarpur Corridor for the ‘sewaks’ of Guru Nanak.

According to Radio Pakistan, Pakistan Foreign Minister Shah Mahmood Qureshi said that this reflects the bigotry of the Modi government. Qureshi also wondered why the Supreme Court of India gave its verdict on the same day the Kartarpur corridor was inaugurated.

Qureshi said, “Muslims in India are already under pressure and after the Supreme Court’s decision, the pressure will increase.” Qureshi said that the reality of India’s secular image has come to the fore with this decision. 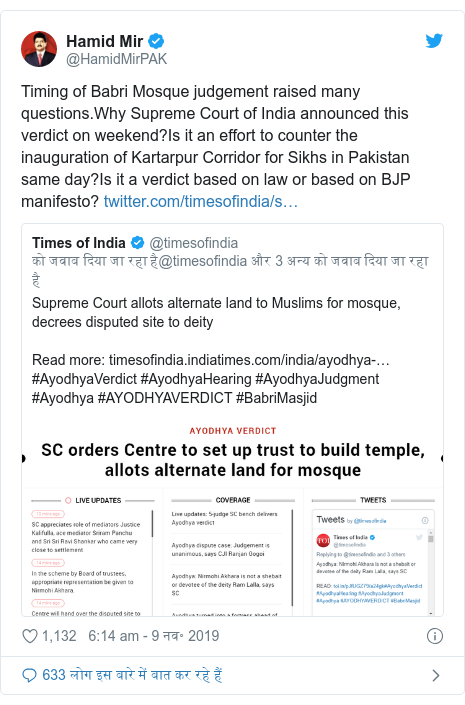 Senior Pakistani journalist Hamid Mir also tweeted and said, “The time the verdict came on the Babri Masjid raises many questions. Why did the Supreme Court of India pronounce its decision this week? Is this in response to what Pakistan has done for Sikhs in Kartarpur? This decision is based on the law or on the basis of BJP’s manifesto. ”

A journalist named Bashir Ahmed Gwakh has condemned the response from Pakistan to Ayodhya. He tweeted, “Interestingly, Pakistan is angry with the decision of the Supreme Court of India on the Babri Masjid, whereas the Ahmadiya Masjid here was demolished at Palhapur in Punjab.”