The Russian news agency, TASS, citing its sources, recently reported that Russia has conducted an experiment on the use of a “swarm” of Su-35 fighters under the control of the 5th generation Su-57 aircraft.

“The experiment was carried out in real combat conditions, a group of Su-35 fighters was involved in the flock, the role of the command-staff aircraft was played by Su-57,” said one of the sources in the ‘military-industrial complex’.

Sources further explained to TASS that use of a “swarm” operating in a single information space, significantly increases the efficiency of combat missions. The agency quoted a Russian military expert, chief editor of Arsenal of the Fatherland magazine Viktor Murakhovsky who said that “work on interaction in defence battle order [in a flock] is important.

In the future, information from all aircraft sensors, as well as from air defence systems, from satellites, from ground-based equipment should come into a single operation that will create a single information field for land, air and space.” He added that with the support of artificial intelligence, the distribution of combat work including for aviation will take place.

For the experiment, information is exchanged between fighter jets in real-time: the information-control system of each aircraft automatically processes data from its own sensors and the sensors of other aircraft giving a complete battlespace picture. The command and control aircraft then guides the course of the battle.

As reported earlier by EurAsian Times, the SU-57 fighter jet is designed to have supercruise, supermaneuverability, stealth, and advanced avionics to overcome the prior generation fighter aircraft as well as ground and naval defences.

Last year, Russia deployed pairs of SU-57s to Syria for what it claimed were combat trials. However, there’s no evidence to prove that the fighters actually participated in front-line missions. 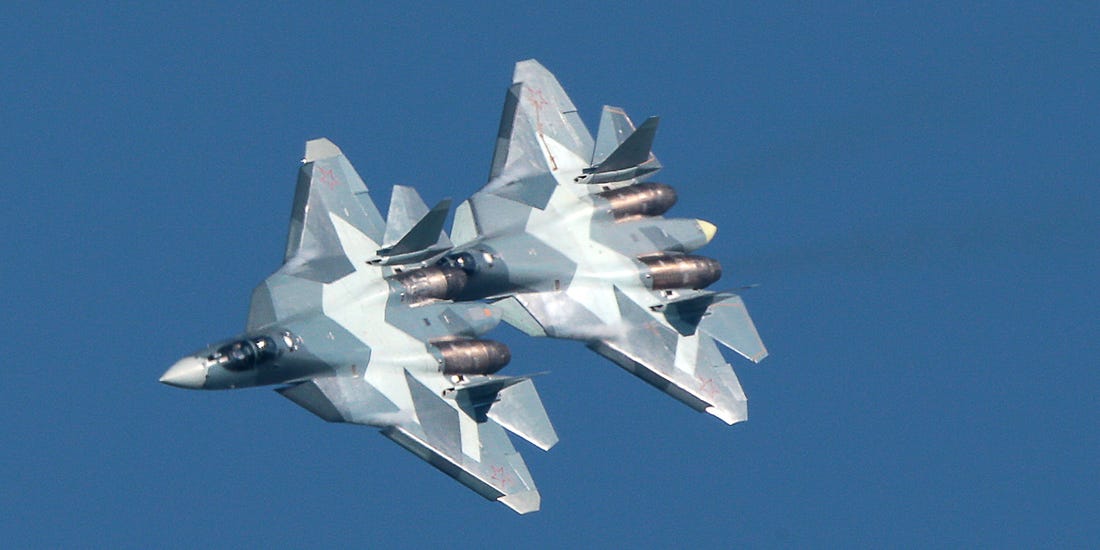 Russia has two military bases in Syria and a sizable military presence where it often conducts live experiments. In addition, foreign reconnaissance and fighter aircraft commonly fly in or near Syrian airspace giving ‘target aircraft’ for a swarm experiment.

The sources that TASS cited didn’t specify the place and date of the experiment. The report also failed to describe what ‘real combat conditions’ meant. Murakhovsky also stated that the US is carrying out similar work for its F-35 line of fighters.

However, he added that neither Russia nor the US has been able to develop such a single information system that would control all types of troops “due to difficulties in creating a single data format for different types and branches of the armed forces.”