On August 28, the US Air Force B-52 bombers flew from Minot Air Force Base in North Dakota to over 30 NATO countries in a single day. While crossing the Black Sea, Russian air force Su-27 fighters tailed the B-52 that rattled the American crew.

While the Americans objected to the “unnecessary” harassment, experts believe that this was a bait to gather intelligence about the Russian air defenses around the Black Sea.

“While the Su-27s were needling the Stratofortress, two four-engine RC-135V/W Rivet Joint electronic-intelligence planes—which the US and UK air forces use to surveil enemy air-defences—were loitering nearby, presumably scooping up all kinds of useful data on Russian sensors and communications,” wrote David Axe, an Aerospace and Defence contributor at Forbes.

A week later, the same routine was practiced again. At least one B-52 flew over Ukraine, close to the Black Sea. According to US European Command, two other B-52’s were exercising over Ukraine on Friday.

This is close to the Crimean Peninsula where the Russian forces are stationed. Previously, these moves were seen only as muscle-flexing by the US and its NATO allies. However, it seems this information could be helpful in the time of war against Russian air defenses in the region.

Video released by the Ukrainian Military of todays joint exercise of 3 USAF B-52’s escorted by Ukrainian Su-27 and MiG-29. pic.twitter.com/o3xDL0mJs0

The B-52s are part of a contingent of six bombers deployed from Minot Air Force Base in North Dakota to the Royal Air Force base at Fairford on August 22. As reported earlier by EurAsian Times, the US has moved its USS Seawolf Submarine at Norwegian port in the Arctic to match the expanding Russian fleet in the region.

“Their presence here helps build trust with our NATO allies and partner nations and affords us new opportunities to train together through a variety of scenarios,” said Gen. Jeff Harrigian, U.S. Air Forces in Europe and Air Forces Africa commander. 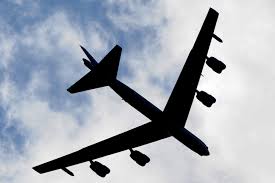 “Understanding those Russian defenses is the top job of NATO intelligence. This apparently is why, when NATO01 flew through international air space over the Black Sea, the two RC-135V/W were close by,” wrote Axe.

He added that while the US Air Force has 17 RC-135V/Ws, the Royal Air Force has only three. “That NATO has devoted at least two of its 20 Rivet Joints to a single operation speaks volumes about that operation’s importance to the alliance—as does the duration of the operation.”

Axe pointed out that this exercise could help the Russians as well. It is an opportunity for the Kremlin to practice detecting, tracking, and intercepting American bombers flying practice runs on Crimea.

During this second probe by B-52, Russian air force’s Tu-214 radio-relay planes took off at its base near Moscow and flew to the Black Sea. “Four Su-27 fighter jets and four Su-30 fighter jets of the Southern Military District’s air defence units on duty were scrambled to intercept the US Air Force aircraft over the Black Sea and the Sea of Azov, with the aim to prevent their unauthorized incursion into the Russian airspace,” Russia’s National Defense Control Center stated as reported by Tass.

“All the flights of the Russian fighter jets took place in strict accordance with international airspace rules. The US aircraft were not allowed to illegally cross the state border of the Russian Federation,” the ministry added.

Axe concluded that the experience Russian forces are gaining from “mobilizing their air-defences is worth more than the information these same forces surrender to alliance analysts in the process.”