China believes that despite the Indian Army’s efforts to bolster its defensive capabilities at the Ladakh border, its soldiers are not yet adequately prepared for a long harsh winter in the western Himalayas.

The ongoing stand-off between the armies of the two nuclear-armed neighbors has entered its seventh-month, with neither side ready to disengage despite multiple rounds of diplomatic talks.

India has deployed thousands of troops near the Line of Actual Control (LAC) — the de facto border between the two countries — in Eastern Ladakh, where the temperature dips to -40 degrees Celsius, and the area receives up to 40 feet of snow in winter. 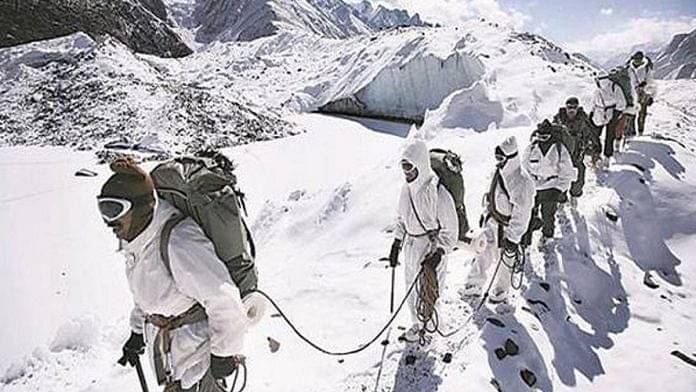 The Indian troops have been supplied with huge stocks of high-protein rations along with high-tech gear, including cold-proof hoods, warm training clothes, and lightweight cold-proof training coats.

However, Chinese expert Liu Xiaoxue believes otherwise. “As the border standoff between China and India drags on into the harsh winter, there has been no shortage of media reports about the predicament faced by the Indian side, such as insufficient funds and technical support for border troops amid the coronavirus crisis,” he told the state-owned Global Times.

“Although India was reported to have transported a large volume of military materials to the border, it’s still questionable whether the necessary winter protection can be secured for its border troops,” said Liu.

Despite such claims, India does not look to falter in the region amid the challenges of the freezing conditions and the tough terrain of the region.

The Indian troops have been provided with ready-to-assemble thermal shelters to support their combat readiness in the clod desert of Ladakh. While the army usually maintains a stock of 60,000 of these specialized clothing for their troops in Siachen as well as the eastern Ladakh sector, an additional requirement of around 30,000 sets was made this year.

Smart Camps To Beat The Chill

Moreover, the Indian Army has also set up smart camps in the region as part of the country’s infrastructure drive in wake of the heightening tensions with the Chinese.

According to a statement released by the army, “Apart from the smart camps with integrated facilities which have been built over the years, an additional state-of-the-art habitat with integrated arrangements for electricity, water, heating facilities, health, and hygiene have been recently created to accommodate the troops.”

A retired Indian Air Force officer told The EurAsian Times that the amount of preparation made by the armed forces brings the much-needed clarity about India’s battle readiness despite China’s claims of India not being prepared for the winter in the region.

“The level of preparation made in the Ladakh region where soldiers have been supplied with all the gear they need shows that we are not scared to take the fight to China if in case things change drastically in the region.

“Yes, the challenges of the region cannot be underestimated but the country is doing everything to have the best possible chance in the region and protect our national boundaries,” the retired officer said requesting anonymity.