Pakistan PM Imran Khan wearing a saffron turban something associated with Indian PM Modi stated that some elements operating in the region have been receiving money from abroad to push the youth of the tribal districts towards unrest. Such elements had been trying to cash in on the problems being faced by locals, said PM Khan in a veiled reference to the Pakhtun Tahafuz Movement. 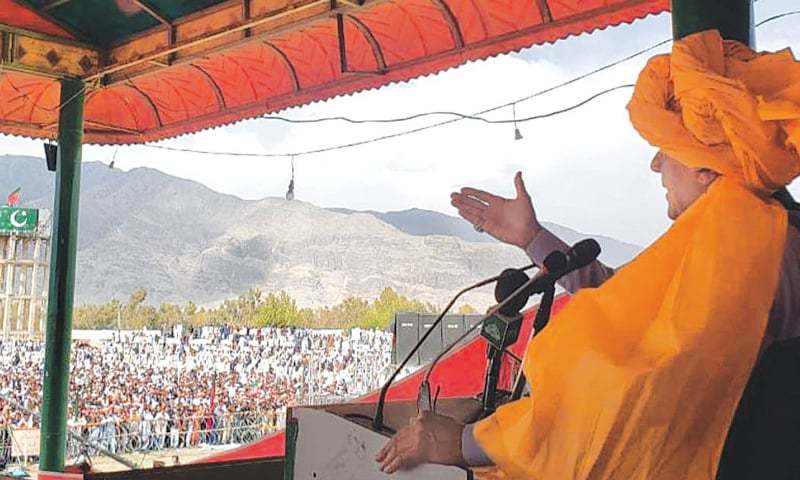 “These people are receiving finances from abroad. And leaders involved in corruption are also providing them support to escape cases,” said the prime minister while addressing a public meeting at Wana Sports Complex on Wednesday.

Mr Khan had recently endorsed the PTM’s narrative but condemned the way their leaders were presenting their case. The movement is popular among the youth of Waziristan, the birthplace of the proscribed Tehreek-i-Taliban Pakistan, where the former had organised a public meeting over a week ago.

On Wednesday, the venue was decorated with flags of the ruling Pakistan Tehreek-i-Insaf. A large number of PTI supporters attended the rally. Khyber Pakhtunkhwa Chief Minister Mahmood Khan and Defence Minister Pervez Khattak were also present on the occasion.

PM Khan assured Waziristan residents that the government was serious about resolving their issues but it would take time. He explained that the local government system was being introduced in the merged tribal districts so that people could elect their representatives at the village level.

About speedy justice, the prime minister said that local disputes would be resolved on the spot as jirga system was being introduced at the police station level to facilitate the process.

Criticising the leadership of major opposition parties, particularly the Pakistan Muslim League-Nawaz and Pakistan Peoples Party, Mr Khan alleged that the Sharif family, Asif Ali Zardari, Bilawal Bhutto-Zardari and other corrupt people had a common agenda to pressurise the government to forgive their corruption. He reiterated that corrupt people would not get any relief. He added that the PPP and the PML-N had borrowed Rs24 trillion loans during the past 10 years.

While lashing out at the PPP chairman, PM Khan called Mr Bhutto-Zardari as ‘Sahiba’. He said: “Unlike Bilawal Sahiba, I didn’t come into politics through a chit like the last will of his mother [slain PPP chairperson Benazir Bhutto] that gave him the political party in inheritance. I founded my own party. My aim is to defeat corrupt people. There will be no leniency for those who had plundered national wealth.”

The prime minister alleged that the chief of Jamiat Ulema-i-Islam Maulana Fazlur Rehman would have easily joined his coalition government if he had been offered chairmanship of the Kashmir committee as well as diesel permits.

Mr Khan said he had opposed the military government’s decision to deploy troops in Waziristan and other parts of the former Federally Administered Tribal Areas (Fata) after 9/11. However, he added, the then government was under pressure to deploy army in tribal area.

On the occasion, he declared that every family in Waziristan would be given Sehat Insaf Card to help them receive medical treatment free of charge.

The PM also announced the construction of separate degree colleges for boys and girls, sports grounds, 100-kilometre road network and upgrade of local grid station. Mr Khan later visited Spinkai Raghzai and addressed a jirga of the Mehsud tribe. Mr Khan said the Mehsuds had rendered unprecedented sacrifices for the country’s integrity which had been recognised by everyone.

The PM promised ‘best packages’ for the people of South Waziristan and said he was well aware of their hardships, according to an official statement. He assured the locals that the government would spend Rs100 billion every year in the health, education, communication and social sectors for the uplift of the tribal areas.