As tensions continue to escalate between India and China over the de-facto Line of Actual Control, the moment has been used to the fullest by both the armies to test new mountain warfare equipment and other weaponry.

Today, Indian Defence Minister Rajnath Singh asserted that no force in the world can stop Indian army soldiers from patrolling the country’s border in Ladakh region.

“I want to make it clear, skirmishes and face-off are because of this (issue of patrolling),” he said, adding the patrolling pattern is traditional and well defined. “No force in the world can stop Indian soldiers from patrolling. Our soldiers have sacrificed their lives only for this,” the minister said.

Earlier, the Chinese PLA was seen deploying load-bearing hexacopter drones to carry supplies to the inhospitable border region, the Indian forces have been keen to conduct high-altitude trials of its latest military hardware. 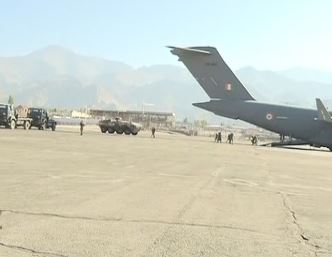 These two vehicles are the TATA-DRDO WhAP (also known as Kestrel), and the Kalyani M4 light strike vehicle.

The TATA-DRDO WhAP (aka Kestrel)

Developed jointly by India’s state-owned DRDO and private industrial giant TATA, the Kestrel is an 8-wheeled Amphibious Armoured Personnel Carrier, capable of attaining speeds of 100 km/hr on road and 10 km/hr in water.

Being an amphibious vehicle, the Kestrel gives a significant advantage to the troops – not halting for bridges to be laid down by engineers when encountered with a small river or similar hydrological formations. The new APC shall replace the BMP-1s and BMP-2/2Ks in Indian service, which, too, are amphibious.

The Kestrel can be configured to various modifications and has been seen with the Protector Remotely Controlled Weapon Station, Elbit UT30MK2 30mm turret, and a BMP-2 30mm turret as its main armament, while secondary armament includes a coaxial 7.62mm general-purpose machine gun.

However, with the new BMP-2 upgrades being sought after by the Indian Army to fill in the vacuum until Kestrel is deemed fit for service, the critical gap between the Soviet-era BMPs and the modern APCs remains. The ongoing brawl at Ladakh and subsequent testing might see hastening of the development and acquisition process.

Although primarily manufactured by a South Korean company named Paramount Group, the Mbombe-4 (M-4) is a 4-wheeled Light Armoured vehicle- bridging the gap of an APC and an armored car.

According to experts, partnered with the Tata Kestrel, the Kalyani M4 makes an interesting combination of armor and speed. While the Kestrel provides the armored punch that spearheads an assault, the M4 will back it up with its speed, maneuverability, and ease of maintenance.

According to the company specifications, the Kalyani M4 can go up to the speeds of 140 km/h while carrying 6 crew members including the driver.