Hundreds of angry protestors pelted stones on the Sikh Gurdwara – Nankana Sahib on Friday. The mob, as per media reports, is being led by the family of Mohammad Hassan, the boy who allegedly kidnaped and converted a Sikh girl who is the daughter of the gurdwara’s priest.

The mob had surrounded the Nankana Sahibgurdwara and were threatening to destroy it. In a video, recorded at the site of the protest, the demonstrators were seen saying that they were against the presence of the gurdwara there. They say they will soon change the name of the place from Nankana Sahib to Ghulam-e-Mustafa.

I urge @ImranKhanPTI Ji to take immediate action on such communal incidents that are increasing the insecurity in the minds of Sikhs of Pak@thetribunechd @PTI_News pic.twitter.com/IlxxBjhpO2

The Indian Government has strongly condemned the mob violence at Gurdwara Nankana Sahib in Pakistan. “India strongly condemns these wanton acts of destruction and desecration of the holy place. We call upon the Government of Pakistan to take immediate steps to ensure the safety, security, and welfare of the members of the Sikh community,” the government said in a statement. 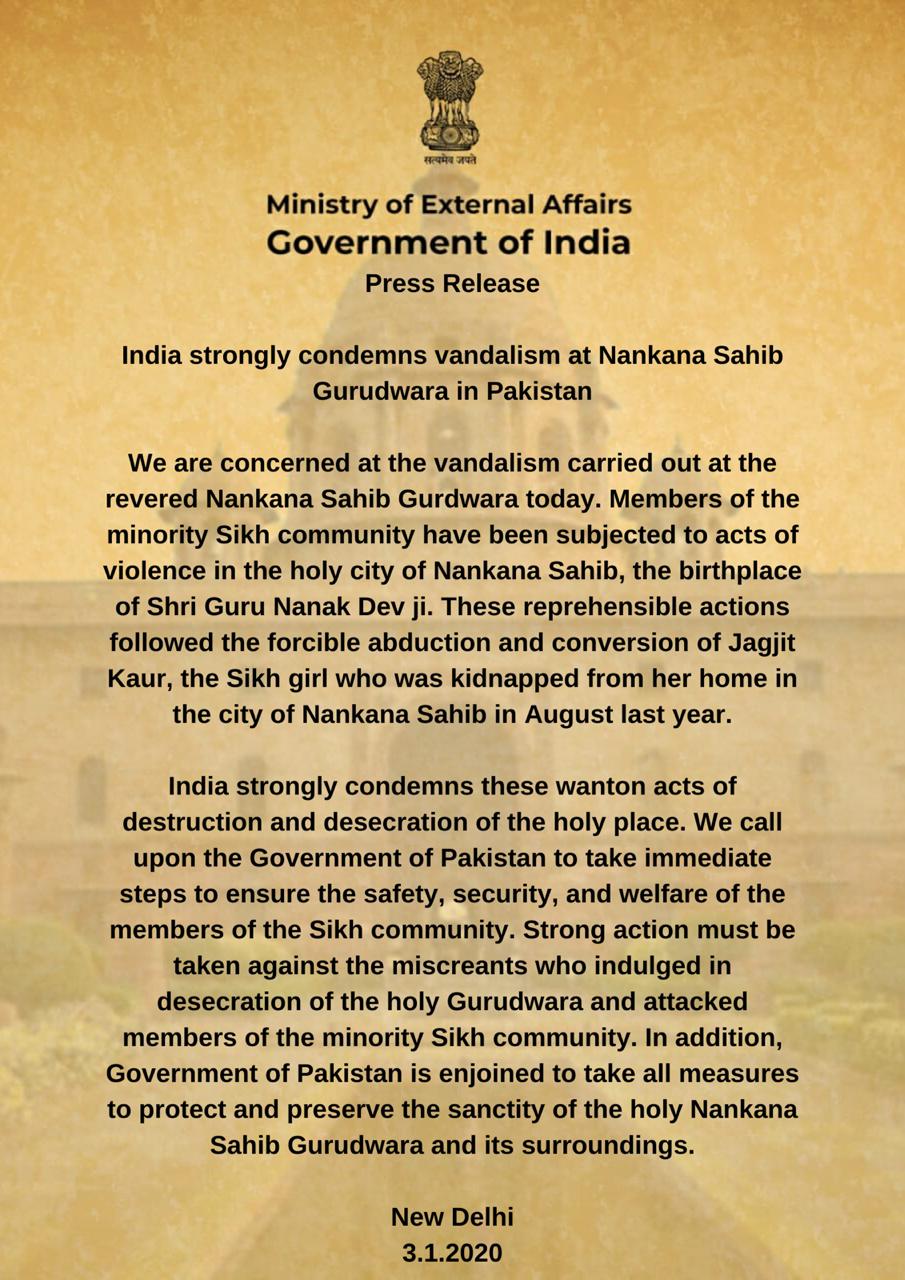 Chief Minister of Indian Punjab – Capt Amarinder Singh has urged Pakistan PM Imran Khan to intervene in the matter. “Appeal to @ImranKhanPTI to immediately intervene to ensure that the devotees stranded in Gurdwara Nankana Sahib are rescued and the historic Gurdwara is saved from the angry mob surrounding it,” Amarinder Singh tweeted.

Appeal to @ImranKhanPTI to immediately intervene to ensure that the devotees stranded in Gurdwara Nankana Sahib are rescued and the historic Gurdwara is saved from the angry mob surrounding it.https://t.co/Cpmfn1T8ss

Shiromani Akali Dal President Sukhbir Singh Badal also took to Twitter to express his outrage on the incident and request PM Narendra Modi to take it up with Imran Khan urgently.

“Mob attack on Gurdwara Sri #NankanaSahib, the birthplace of Guru Nanak Dev ji, is a despicable act and I urge PM @narendramodi ji to take it up with Pak PM @ImranKhanPTI. We have to ensure the safety of Sikhs in Pakistan and I trust that the govt will address the issue on priority,” SAD chief tweeted.

The angry mob at the gurdwara is being led by Mohammad Hassan’s brother, who has claimed that Hassan has been beaten up mercilessly by the officials for legally marrying the girl. The family alleges that the Sikh girl, now known as Ayesha, has declined to convert back despite the pressure.

“I have been beaten by police authorities many times on orders of the minority minister and others. These Sikhs have been pressurizing us to send the girl back to them. But that will never happen because she is a Muslim now. She does not want to leave my brother or Islam. We will stand by her side and protect her,” said the brother of Hassan.

Cyber attacks and not the Russian S-400 missiles could be the biggest threat to the US' most-advanced F-35 stealth fighter jet, also called the...
Read more

As the US is offering F-15EX jets to the Indian Air Force, many experts have suggested that that the Boeing F-15EX jets could be...
Read more
Load more