India or China: Who Fired The First Bullet Is Not Important, But Bullets Were Fired Signals ‘DANGER’

As the India-China border conflict reaches a dangerous juncture, Chinese military spokesperson has warned the Indian side to refrain from threatening actions after Indian soldiers ‘illegally crossed the Line of Actual Control (LAC)’ and fired warning shots.

Zhang Shuili, the spokesperson for the Western Theater Command made the remarks in a statement after Beijing claimed that the Indian army again illegally crossed the LAC in Shenpao Mountain area near the southern bank of Pangong Tso (Lake) on Monday.

The Indian military adventure, which Zhang called “severe military provocation,” dangerously violated the agreement reached in the previous meeting by China and India and can very easily cause misunderstandings and misjudgments, Zhang in the statement.

#环球时报Editorial: #China doesn't want a border war with #India. But if the Indian side misinterprets China's goodwill and intends to deter the PLA with warning shots, its moves will backfire. China will never concede for the sake of avoiding a war. https://t.co/XToN8MwQVQ pic.twitter.com/iWlUsZZZbC

Zhang also urged India to stop all provocative actions, “retreat all the troops that trespassed the LAC immediately,” “regulate the front-line forces,” and “investigate into the personnel who fired arms to provoke the tension [along the border].” “Western Theater Command will resolutely follow the order and duty, and protect the sovereignty and dignity of China,” Zhang added.

Regarding the recent tensions in the border area, India’s External Affairs Minister S Jaishankar on Monday said the state of the border with China could not be delinked from the state of the overall relationship with the neighboring country. Describing the situation as “very serious,” he called for a “very very deep conversation” between the two sides at a political level. 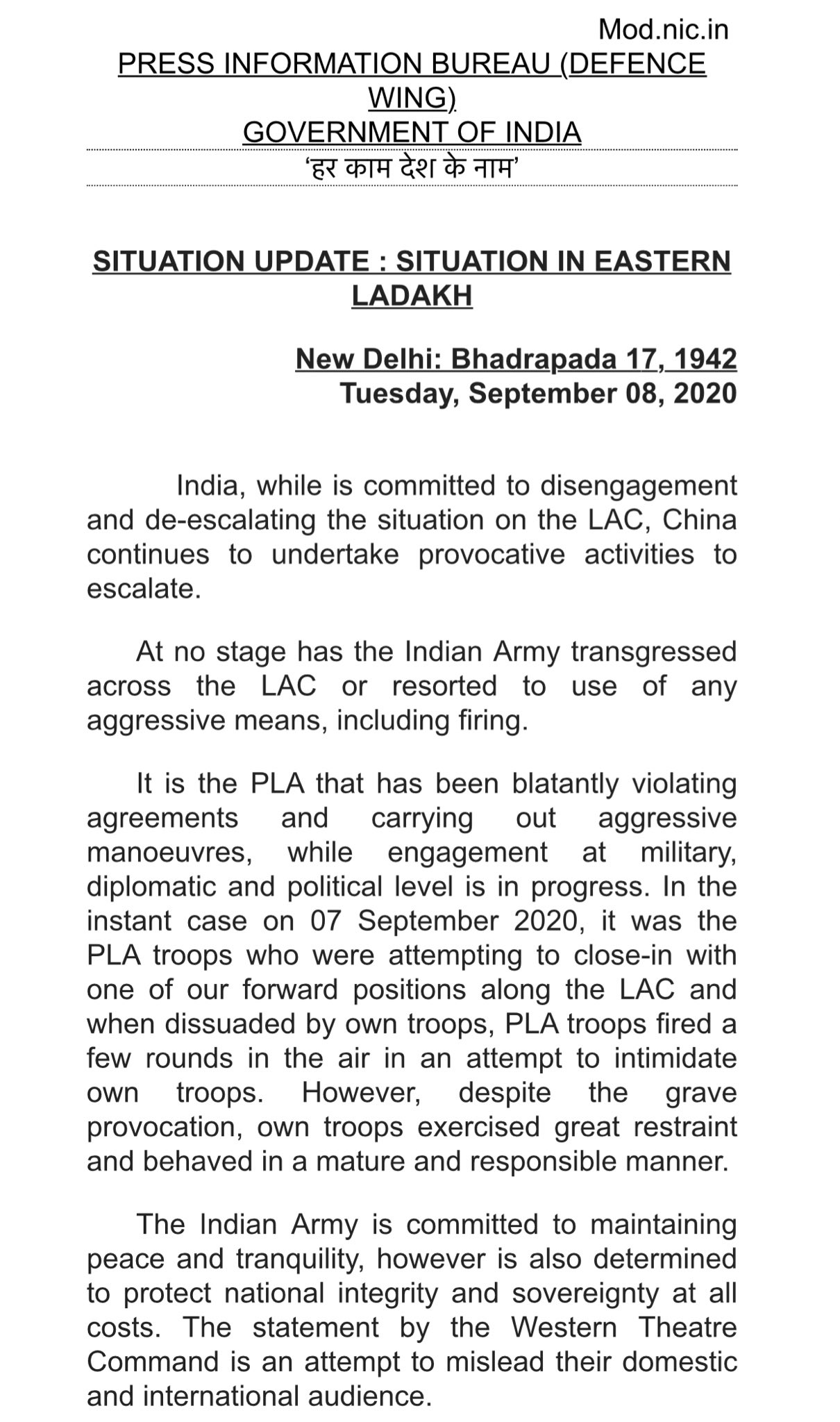 The Indian government via a press statement rejected Chinese allegations and said at no time on Monday did its troops cross the Line of Actual Control (LAC) in the disputed area or use firearms. Both violations were conducted by Beijing, it said.

“It was the PLA troops who were attempting to close-in with one of our forward positions along the LAC and when dissuaded by own troops, PLA troops fired a few rounds in the air in an attempt to intimidate own troops,” India said in a statement.

New Delhi and Beijing expressed resolution to protect their interests in Eastern Ladakh. Tension has been running high for months along the disputed LAC in the Himalayas, with several skirmishes taking place between the two most powerful armies of Asia.

Experts talking to the EurAsian Times who did not wish to be named said that the situation could spiral out of control if New Delhi and Beijing do not address the issue instantly.

‘Today, a few warning shots were reportedly fired and tomorrow India and China could be firing at each other and before you know we could be hitting each other with missiles and what not’. ‘Who fired the first shot is not important, but bullets were fired, despite the pact, signals grave danger ahead.

Previous article
How Chinese Drones Are Helping Farmers Not Only In China, But In The US & India Too?
Next article
A Cue For India: Taiwan Shows Way Forward To Counter Attacking Chinese Forces