Pakistan PM Imran Khan in an exclusive interview said India is trying to bankrupt Pakistan and push it on the blacklist of the Financial Action Task Force (FATF) as he ruled out any prospects for the resumption of talks with its nuclear-armed neighbour.

In an interview with Al-Jazeera TV, Khan said after assuming office in August 2018, his government tried to start a dialogue with New Delhi to sort out all differences including the core Kashmir issue through a political settlement, but they pulled back after realising that Narendra Modi-led government has an agenda to push Pakistan towards disaster. 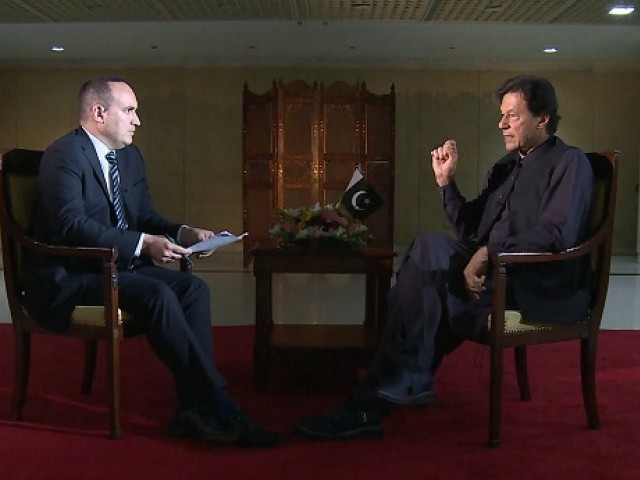 “No question of talking to Indian government right now after it revoked Article 370 of its constitution and annexed Kashmir illegally against the UNSC resolutions. India’s unilateral action not only violated international laws but also its own laws,” he said, adding the UN resolution called for a plebiscite in Jammu and Kashmir so that Kashmiris could determine their own fate, added.

Khan said the two countries have similar problems including climate change but their sincere urge for dialogue was misinterpreted. “The BJP’s extreme right-wing, racist and fascist government is treating us as if we are scared of them. They took our peace gesture as appeasement,” he added.

Khan said India is engaged in genocide, a sort of racial attack against Muslims and minorities, never witnessed in history since Nazi Germany. About eight million Muslims in Jammu and Kashmir have been under siege for almost six weeks now, he said.

“The developments have made the region a flashpoint as India could do anything like it did after the Pulwama attack to divert the world’s attention from its illegal annexation of the J&K and genocide of the Kashmiri Muslims,” he continued.

“[After such attack] they would try to blame Pakistan and could do what they had done in last February. Pakistan fears that such incidents could occur again,” he added.

Clarifying a question, the prime minister maintained that there should be no confusion over his statement that Pakistan would never start a war. “I’m a pacifist and anti-war. I am clear about it,” he said, cautioning that if two nuclear-armed countries fought a conventional war, there was every possibility that it could end up into a nuclear conflict, which is unthinkable.

In that case, such a conflict would have far-reaching consequences going beyond the Indian sub-continent. If the international community failed to resolve the Kashmir issue, it would impact the entire world and the entire world markets, he added.

The prime minister said they would approach all the international forums to highlight the plight of the Kashmiri people and the illegal and unilateral steps taken by India. They must act now as the situation has the potential to snowball into a disaster spilling beyond the Indian sub-continent.

He said they would be urging the world powers like the US, Russia and the European countries, to play their role in resolving the issue, adding that China has been very supportive to Pakistan.

About US President Donald Trump’s offer to mediate between Pakistan and India, the prime minister said they are really thankful to him for his offer.

He said when the US president seriously intervened in an issue there would be some sort of resolution. “Secondly, if the US did not directly intervene, it has a role in the United Nations and the Security Council to exercise.”

India is stonewalling this suggestion because it knows that once the international community is involved, it will insist on implementing the exercise of right to self-determination of the Kashmiri people, he said. Khan to a question, replied that during the upcoming UN General Assembly session, he would focus on the Kashmir situation.