By EurAsian Times Desk
December 21, 2018
Indian heavy artillery gun – Advanced Towed Artillery Gun System (ATAGS), has advanced to a stage where user-assisted trials of the gun are likely to start by June 2019 and the Indian Army has begun finalising the Preliminary Specifications Qualitative Requirements (PSQR), a defence official said.
“Two guns are currently undergoing trials and another two guns will join the trials in a month,” the official, who spoke on the condition of anonymity, said. “User-assisted trials will begin from May-June while the PSQR should be ready by July,” the official added.
The ATAGS is a 155mm, 52 calibre gun being developed by the Defence Research and Development Organisation on two parallel tracks: one prototype is being built in partnership with TATA Power (Strategic Engineering Division), and the other is in collaboration with Bharat Forge. There is a sanction for production of 10 guns as part of the development process. The Army, which is in the process of drawing up the PSQR that details the essential and desired parameters for the gun, has already flagged a few concerns related to weight and accuracy. The gun currently weighs about 18 tonnes while the ideal weight for the army would be 14-15 tonnes. While the development team wanted the weight, accuracy and firing parameters to be relaxed in the PSQR, the Army has said that would be looked into after the user-assisted trials commence.
The gun has been undergoing development trials for some time now, with a few trials held in the Pokhran firing ranges as recently as last month. 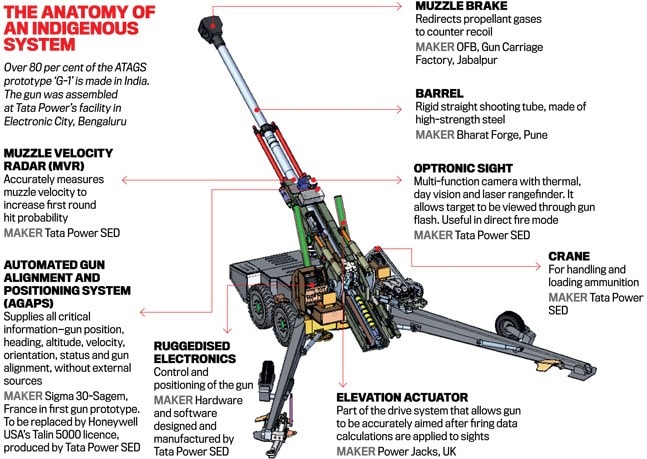 Once the PSQRs are approved, the process for formulating the final Qualitative Requirements would begin. Guns from both Bharat Forge and Tata Power would be evaluated and based on the commercial bids, the order would be split between them with the lowest bidder getting a larger order. The Defence Ministry has already approved the in-principle purchase of 150 of these guns at an approximate cost of ₹3,365 crore.
The gun has several significant features including an all-electric drive, high mobility, quick deployability, auxiliary power mode, advanced communications system, automated command and control system. It also sports a six-round magazine instead of the standard three-round magazine. This necessitates a larger chamber and is a major factor in pushing up the overall weight of the system.
The Army, which has been seeking to accelerate the modernisation of its weaponry, recently inducted its first modern pieces of artillery in three decades: the M777 Ultra-Light Howitzer from the U.S. and the K9 Vajra-T tracked self-propelled artillery gun from South Korea.
As Published in the Hindu
Previous article
After Saudi, UAE Plegdes $3 Billion Support To Pakistan Totalling $6 Billion From The Middle East
Next article
Why is India Worried With Resignation of US Secretary of Defence – James Mattis?