The Indian Army has said that the Chinese People’s Liberation Army had been conducting provocative actions along the Line of Actual Control at the contested area of Pangong Tso, on the intervening night of 29-30 August. 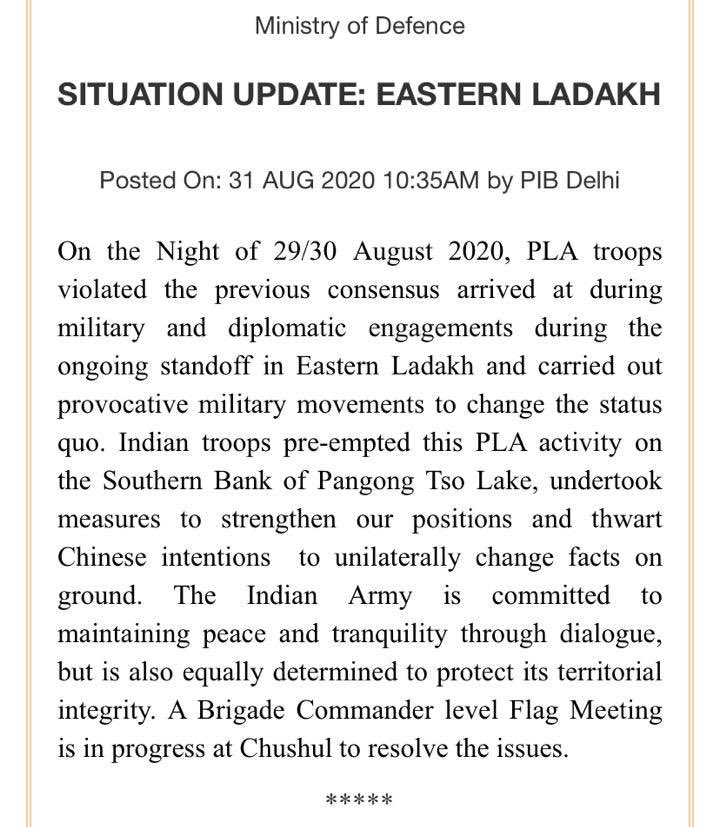 According to a statement issued by the Ministry Of Defense, on the Night of 29/30 August 2020, PLA troops violated the previous consensus arrived at during military and diplomatic engagements during the ongoing standoff in Eastern Ladakh and carried out provocative military movements to change the status quo.  The Indian Army is committed to maintaining peace and tranquility through dialogue, but is also equally determined to protect its territorial integrity, it added.

“This was a violent clash near Chushul. Hand to hand fighting. No weapons fired & no casualties reported. #LadakhClash,” he tweeted.

While a Brigade Commander level flag meeting is also going on in the same area, Chushul, however, the timelines of the clashes here remain uncertain as of now- with, as usual, many questions remaining unanswered.

Tensions are at an all-time high and these reports come again from Eastern Ladakh, as China tries to continuously change its stance towards the Indian Government overtly by declaring the favor of Chinese citizens towards PM Modi or calling it a “brief moment in history”- while at the same time also threatening New Delhi by asking to look at the ‘big picture’ and making other similar remarks. This significantly turns the balance as distrust now deepens further, lowest since 1962.

Yesterday reports also surfaced that India has deployed a frontline warship to the South China Sea and Malacca Straits to deter the Chinese naval actions in the area, and working in tandem with its allies from the QUAD.