In January last year, an Indian firm received a $20 million contract to provide the country’s defense forces with its High Altitude SWITCH Unmanned Aerial Vehicle (UAV) within a year.

This is for the first time that the government entrusted an Indian company to deliver a high-tech, indigenous product in a short time span. A year later, following the timely delivery of the huge order despite the pandemic, the firm received yet another order for its drones.

In mid-January last year, it was reported that the Indian Army had inked a deal with ideaForge, an indigenous drone solutions firm, to procure an unspecified number of high-altitude SWITCH UAVs. The deal was valued at approximately $20 million.

According to a statement that the company had released back then, ideaForge was chosen for the deal after an evaluation process that was done in real-world conditions. SWITCH had then appeared to be the only drone after the trials and was chosen for the fast-track procurement.

Speaking to The EurAsian Times about requirements that had to be fulfilled and the challenges the firm had to tackle back then, Kruthi Aramanamada, General manager of Marketing at ideaForge, said, “The overall requirement that the army had was for a drone that a soldier can carry on their shoulder, without compromising on the performance aspect.

The other aspect was the high-altitude requirement. As the altitude increases, the air becomes thinner and it is difficult for most flights to take place there. In addition, the drone needed to survive is extreme temperature and weather conditions, from the hottest to coldest. These were the challenges posed to us.

“With the Switch, it basically performed twice as better, despite having half the weight of the competitors. We beat 12 global competitors from Israel, Germany, US, India, etc.”

In the statement that came out in January 2021, the company’s CEO Ankit Mehta was quoted as saying that the SWITCH UAV was the peak of insights and knowledge the company has gained over the years, through its experience in assisting the Indian forces in operationalizing UAVs in their ranks.

“The trials saw about a dozen national and global players compete to meet the operational requirements. SWITCH UAV is the only product that cleared the Indian Army’s stringent product trials and surpassed expectations,” he had highlighted.

The firm was able to fulfill the delivery without any delays despite the pandemic.

Following the successful delivery, ideaForge was given the responsibility of an additional order for the SWITCH drones. The number of drones ordered, or the worth of the newly signed deal has not been revealed yet. However, it is confirmed that the order has been placed by the Indian Army to strengthen its surveillance activities along the Line of Actual Control (LAC), the de facto border with China.

The company, in its press release, revealed that the Indian Army has “entrusted” it with “an additional order” for the same UAV. It noted that a defense official had also said that the forces “have received deliveries of the SWITCH 1.0 UAVs in time and are eager to strengthen our northern and eastern borders with swift induction of this force multiplier technology.”

When asked about the lessons that the firm learned from the process of fulfilling previous orders, Aramanamada said, “It (the contract for SWITCH drones in 2021) was a big order. To add to that, COVID posed the biggest challenge. There were cash flow challenges and disruptions in the global electronic supply chain. In addition, there was a limited team presence on the sho floor owing to covid protocols.

This made us realize the importance of always having a Plan-B and having swift action plans in place for any risks. The year 2020 had already readied us to prepare for large orders well beforehand, we always had a Plan-B in place just to make sure everything happens on time.”

When asked about possible advancements this new batch of drones might have, she noted that this drone is the same as the one previously offered. “It’s the same drone, but we are constantly testing and improving the product. However, broadly in terms of the features, it is the same product. It’s not really a larger, advanced version of this, but it will obviously incorporate all of the small changes and upgrades that we will do.”

The SWITCH UAV provided to the Indian forces does have some interesting specifications.

According to the ideaForge website, SWITCH is a first-of-its-kind Vertical Take-Off and Landing (VTOL) and fixed-wing hybrid unmanned vehicle. A VTOL feature, along with the hybrid nature of the UAV means that it combines the strengths of an aircraft with multiple rotors (multirotor) with those of the classical fixed-wing.

In other words, this UAV can take off and land vertically without needing an airstrip, owing to the VTOL feature. At the same time, it has the benefits of fixed airwing as well.

Fixed-wing drones are airplane-like. Instead of vertical lift rotors, they employ a wing to provide lift. This design allows the drone to fly forward more efficiently than a multirotor UAV, greatly increasing its endurance. This also makes the drone suitable for mid-and large-scale survey missions and mapping of long corridors.

The UAV provides versatility as well as the ability to lift heavier, higher-quality payloads without the risk of damage on landing

In terms of technical specifications, the SWITCH has two main wings and two tail booms with stabilizers. It can be used for long-duration operations, long-endurance surveillance and security, inspection, and photogrammetry. 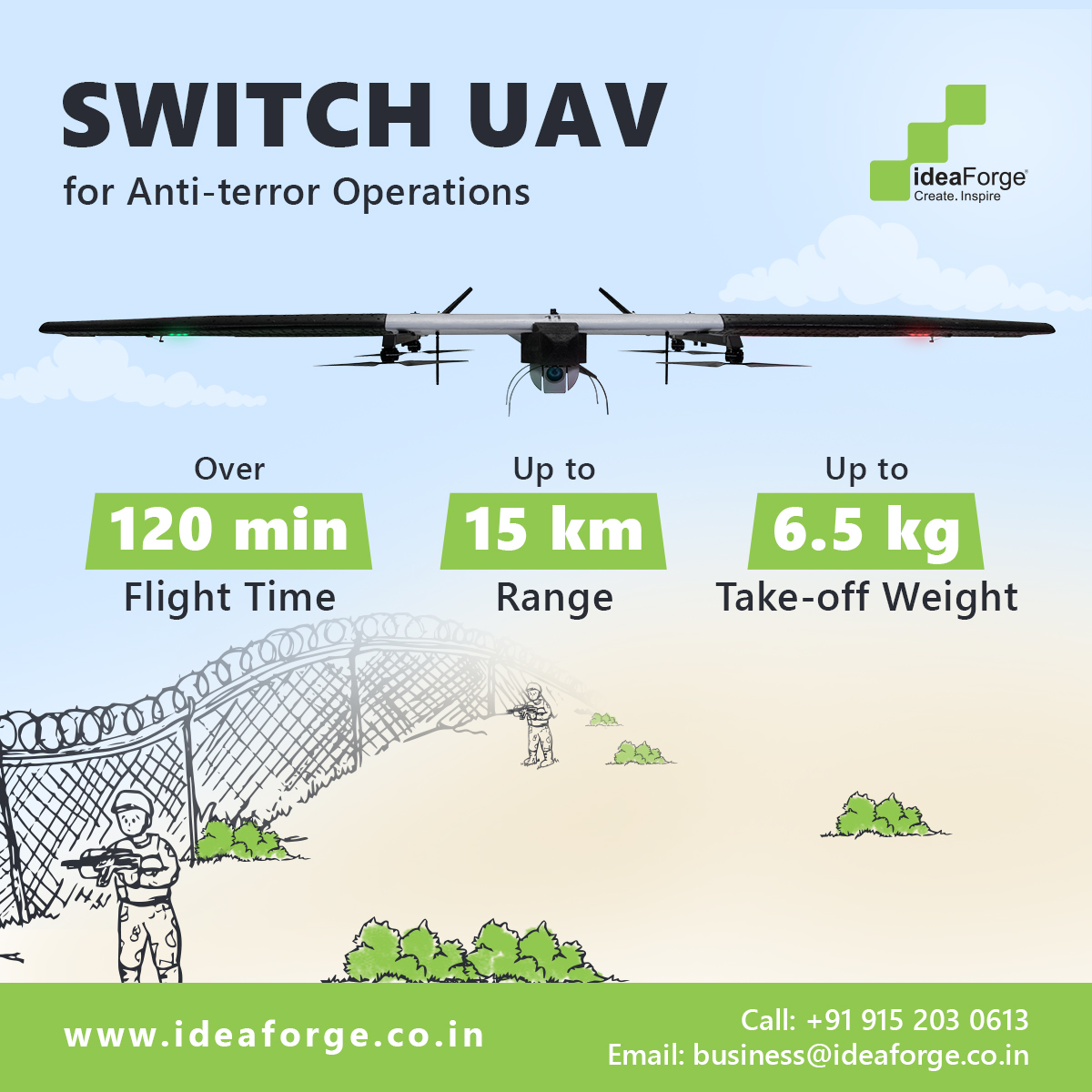 It has an endurance of over 120 minutes and a stated range of 15 kilometers. The drone is quite compact in size, measuring about 2.6 meters x 1.8 meters. It weighs less than 7 kilograms. It has a resistance of up to 10.8 knots (20 km/h) and has Ingress Protection rated IP53 for dust and water resistance. While the SWITCH’s maximum launch altitude is 4000 meter AMSL, its maximum operating altitude of 1000 meters AGL

The drone also has a combined day and night payload, with the daylight payload being 1280 x 720 pixels, with 25 times optical zoom.

The SWITCH comes with fail-safe features. These primarily include multiple GPSs, in case one or more fail. The drone is also designed such that it automatically returns home when running low on battery, or when there are high winds.

“Our fail-safe features make the drone super-smart — it knows what not to do, and that autonomy aspect of it makes it quite reliable. The drone does its job so that the Jawan can do his job in hand without worry about the flying aspect,” Aramanamada added.

The UAV’s ground control station (GCS) offers command and control for the drone and its payloads. This is done through a high-range communication box. The GCS unit comprises a laptop or tablet computer which features integrated application software with geographic map and video view. It also comes with a USB port and a handheld controller.

The software in the computer provides the capability of a pre-flight self-check, enables live flight parameters, and real-time video streaming. At the same time, the handheld controller allows for complete camera control of pan, tilt, zoom, and black/white hot modes.

A secure uplink and downlink are provided for encrypted video and telemetry data transmissions.

Aramanamada also highlighted the stealthiness of the drone. “The drone itself can fly up to 1000 meters high in the air from the point of take-off. At such great heights, it isn’t visible to the naked eye, nor does it show up on radars. It also would not be loud because of two reasons: it’s battery-driven and to perform the kind of missions that the forces need the drone for, it will be flying at a maximum height.” It is unlikely that the minimal noise that the drone makes will be audible from a maximum altitude of 1 kilometer.

The drone can be used for anti-terror missions with its ability to detect threats and identify risk-prone areas from remote locations. It can also be used for border security operations as it can conduct reconnaissance missions and track illegal activities without putting the lives of soldiers at risk. The SWITCH drone can conduct surveillance and gather actionable intelligence, thus helping in counter-insurgency missions.

Exuding confidence in his company’s drone and manufacturing capacity, Mehta noted in the statement, “We have completed the delivery of the previous order in time and are gearing up to deliver the additional order within the set timelines as well. We are thrilled by the impact created by SWITCH UAVs in serving our nation and maintaining the sovereignty of the Indian territory”.